I've retired to live in Spain, but I originate from a village on the outskirts of Stoke-on-Trent, England. My roots are there, my family are there, it is my heritage.

Daniel Tatton is perhaps the latest celebrity from Stoke on Trent. Daniel has the honour of being the first young poet laureate for the City, and carried the 2012 Olympic Torch through Burslem on 31st May 2012.

So, what's special about Stoke-on-Trent?

Well for a start, the inhabitants. Folk from Stoke-on-Trent are a breed apart, a rare mix of rough and ready.

They're hard-working, friendly people with damn big hearts and no

horror stories to tell - but through all the roughness and grime, talent shines through. There's a creative streak in folk from Stoke-on-Trent, that's hard to keep down .

In 1910, the collective towns known as the 'Potteries' - Burslem, Hanley, Longton, Stoke, Fenton, and Tunstall - plus a handful of villages, were reorganized to form the county borough of Stoke-on-Trent.

It was the largest such union ever to take place in Britain.

In 1925, the merger was granted city status, Stoke-on-Trent finally spawned into existence.

Stoke-on-Trent is a union, and like a Kindle Romance, it became an amalgam of separate identities that chose to become one.

The initial administration centre and mainline railway station was Stoke, and this gave it’s name to the district. After the union, Hanley emerged as the chief commercial centre of the city, despite the efforts of its rival, Burslem.

Stoke-on-Trent is the hub of the British ceramic industry, and the biggest clayware producer in the world.

The site of an old colliery and other reclaimed land is planted as the Central Forest Park. Stoke-on-Trent was the site of the first National Garden Festival in 1985; the site was subsequently developed into the Festival Park, a business area where some 3,000 jobs have been created.

Major pottery manufacturers in Stoke-on-Trent, include:

Josiah Wedgwood was a child potter who went on to convert the trade from a minor craft to a full-blown industry.

Wedgwood was the youngest son of a family who lived at Burslem. From the age of nine he earned his living by creating unique pottery.

At 21, he became a partner in a small hand-pottery at Stoke. His resourcefullness and intelligence developed unheard of lines of pottery, including the extremely fashionable Queen's Creamware, in which Cornish china clay was used, instead of local clay.

As Wedgwood grew rich, becoming the Queen's Potter, he financed a whole village called Etruria to house his workers. He also paid for roads and canals to improve his trade. 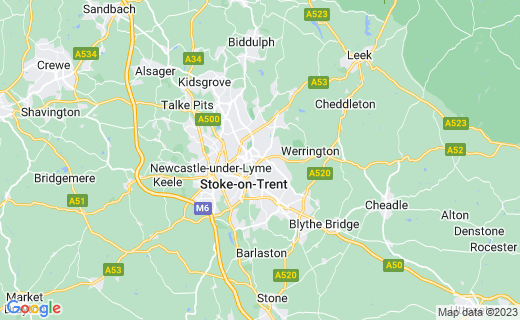 Henry was born in Hanley, Stoke-on-Trent in January , Edward John Smith, 62, was the son of a potter, Edward Smith and Catherine Smith.

At the age of 13, Edward John Smith went to Liverpool to begin a seafaring career where he took up an apprenticeship with Gibson & Co., Liverpool.

He joined White Star in 1880 and won his first control in 1887. Among the ships he commanded was the Republic, the Coptic, Majestic, Baltic, Adriatic, Olympic and of course the Titanic.

Smith was married to Eleanor and they had a young daughter Helen Melville.

Stoke-on-Trent is located in the north of the county of Staffordshire, England.

Oliver Lodge was born in Penkhull, Stoke-on-Trent. Oliver was a blend of scientist, humanitarian and academic.

He became Professor of Physics and Mathematics at the University College of Liverpool and was narrowly beaten to the discovery of electromagnetic waves by Hertz. Later in 1894, he was the first person ever, to transmit a message by radio telegraphy.

The car's the thing

Oliver later went on to invent the spark plug, which of course was crucial to the development of the internal combustion engine. So, the next time you jump into that beautiful car in your driveway, remember - there might never have been a car without Oliver Lodge from Stoke-on-Trent.

Another author from Stoke on Trent - Ellie Jones - Kindle edition

It was intended that Arnold should become a lawyer, but he had an interest in journalism and short-story writing. In 1889 he left the Potteries to make his home in London where, for a time, he worked as a solicitor’s clerk. By 1893 he had become a journalist and within three years was the editor of the London periodical ‘Woman’.

Bennett’s first novel, "A Man from the North", was published in 1898. His other works include "Anna of the Five Towns", where Bennett struck the theme which earned him respect as a novelist.

In this book he wove into fiction many factual aspects of his hometown. Bennett’s novels are celebrated for their sociological style and chronological detail.

In terms of significant themes and convincing stories, "Clayhanger" and "Old Wives Tale" rate as high as any fiction in the English Language and, with the humorous novel "The Card", categorize Bennett as a celebrated and critically acclaimed man of letters.

Reginald Mitchell - Designer of the Spitfire

Another son of Stoke-on-Trent, Reginald Mitchell, was designer of the WWII Spitfire aeroplane.

Among the most famous aircraft of all time, the Spitfire commenced manoeuvres before World War II and was one of the minorities of pre-war designs to continue front line service until the end of the war and beyond.

As the war moved ever onward, the Spitfire was given heavier armament and engines that were more powerful until it was double its original weight and power.

21,554 Spitfires were built, in 24 styles, including 1220 Seafire aircraft adapted for aircraft carrier operation. Mitchell was also the designer of the Supermarine Spitfire.

Stoke-on-Trent's favourite son, Sir Stanley Matthews is thought by many to be the greatest exponent ever, in the history of football. He made his first appearance at the age of 17 for his local First Division professional team, Stoke City. Two years later, he was selected to play for England.

Stanley Matthews began his football career in 1931 and played at different times for Stoke City and Blackpool. When Stanley retired in 1965, he held 54 international caps.

Matthews was capable of subtle body swerves, acceleration, and such superb ball control that he worried virtually every defender he faced.

At the age of 41, Matthews won the first-ever European Player of the Year award. In 1965 Mathews was knighted by Queen Elizabeth II, and became the first active football player to take delivery of the honour.

Widely appreciated as the perfect sportsman, Stanley Matthews was NEVER cautioned by a referee throughout his 33-year career. Sir Stanley passed away on the 23rd February 2000.

In addition to his 14 world titles, Phil has won over 75 other major tournament prizes which makes him the most successful darts player in the history of the sport.

Robbie Williams was born in Tunstall, Stoke-on-Trent, on the 13th February 1974.

Even as a youngster Williams was always self-assured and outgoing. It was no surprise when he eventually became a member of the successful boy-band ‘Take That’.

However, Robbie Williams decided to go solo in 1995.

Robbie was extremely successful and is still releasing hit after hit and has already cemented his place in the music industry with tracks such as ‘Angels’, ‘Let me Entertain You’, and ‘Millennium’.

His albums went on to win absolute international recognition in the industry.

Robbie is a home-loving man and a keen supporter of Port Vale football club in Stoke-on-Trent .... But there again I suppose someone has to.....

From one 'Pot-Herb' to another, leave us a message if you read this Robbie.... Good on you mate, give it some wellie .... Up the Potters....