What to do in Nottingham in a day

I was inspired to write this hub after an Australian woman that I 'met' in an online forum said that she would be visiting the UK later this year and would have just one day in the beautiful city of Nottingham - could I suggest some sights for her to see? Her particular interest was architecture so I told her about some of the fine buildings in the city including the wonderful examples by the Victorian artist Watson Fothergill.

It started me thinking though - what if someone had just one day to spend in Nottingham and wanted to experience the best that the city has to offer in such a limited time, what should they concentrate on?

So here are a selection of some of the main sites that can be easily seen in a day. The tour starts and ends at the heart of the city in the Old Market Square and should whet your appetite to explore more that this compact and vibrant city has to offer.

(If you scroll down the page there's a handy map with markers showing the main places mentioned).

Starting from the Market Square

OK - so you have just one day to spend in Nottingham and you want to get a flavour of the city - maybe with a view to coming back one day and explore it in more depth - where to start?

The beauty of Nottingham is that it's a relatively small city that's easy to get around, whether by walking, or hopping on the buses that link the two main shopping centres - the Victoria Centre and the Broadmarsh Centre - that are located at opposite ends of the city. The logical place to start though would be in the centre, specifically in the Old Market Square.

This open square is the largest such in the country at 22,000 sq m and has for hundreds of years been considered the heart of the city. Once the site of the daily market and the famous Goose Fair until both were moved to other locations, it is still used for concerts, exhibitions and events such as craft markets, and the lovely traditional German Christmas market.

In spring the Nottingham wheel is usually in place offering wonderful bird's-eye views of the city and in the summer the council turn the square into a 'seaside' playground complete with a sandy 'beach', deckchairs & fairground rides.

The square has recently been refurbished with a new water feature at the top end - a magnet for children in sunny weather! The Council House at the other end is guarded by a pair of magnificent art-deco Lions - a traditional place for the people of Nottingham to meet.

Under the Council House is Exchange Arcade, with its lovely glass roof, housing boutiques such as Warehouse, Karen Millen, Kookai & Kaliko, and also the Tourist Information Centre - a good place to pick up a map to guide you for the rest of the day.

Nottingham Castle and the surrounding area

Now, armed with your map, and with your back to the Council House, head west, keeping the fountains on your right hand side and go up Friar Lane, crossing the dual carriageway of Maid Marian Way about half way up until you arrive at the gateway to the castle.

The present castle building is a 17th century mansion which was built on the site of the original medieval castle (demolished after the execution of Charles 1). It commands an elevated position with spectacular views across the city and surrounding countryside. It houses an excellent museum and art gallery with a collection of Nottinghamshire archaeological and historical artefacts, silver, glassware, decorative items and paintings. The galleries showcase works from local, national and international artists. It's also a great place for children with interactive displays and activities and a medieval themed playground in the grounds with a covered picnic area.

There is an admission charge - with concessions and family tickets available - which also includes entrance to the Museum of Nottingham Life, housed in the Brewhouse Yard at the foot of the castle - a fascinating museum depicting the social history of Nottingham over the past 300 years. These are both worth a visit if you have the time - more information can be found here.

Also in this area is the much photographed statue of Robin Hood and Ye Olde Trip to Jerusalem - one of the three contenders for 'oldest pub in England' situated in Nottingham (the others being The Bell in the Market Square and The Salutation on Maid Marian Way.

The canal and waterfront area

A short walk from the Brewhouse Yard, across Castle Boulevard, will take you to the recently refurbished waterfront area. This contains the amazing architecture of the Inland Revenue building and many pubs & restaurants lining the waterside - a good place for a lunch stop maybe?

Interesting pubs include the Canal House Bar & Restaurant which is said to be the only pub in Britain with a canal running inside it - there are often a couple of barges moored inside - and Fellows Morton and Clayton, a real ale pub which brews its beer on the premises.

After a refreshing lunch, cross Canal Street and head up Middle Hill until you reach Weekday Cross - the site of a medieval market. If you turn right here, you will find yourself in the Lace Market area.

The Lace Market got its name in the 18th century when it became the centre of the lace industry with over 130 factories being based in the many architecturally magnificent buildings to be fond here.

It's now a trendy area with many pubs, clubs and fine restaurants tucked away in the cobbled streets and is also the site of Nottingham's newest art gallery - the Nottingham Contemporary which opened in 2009 with a David Hockney exhibition.

There is also the Galleries of Justice Museum housed in the old courthouse and gaol, devoted to the history of crime & punishment in an entertaining way!

Back to the Square

There's also the option of walking along Fletcher Gate and turning left down Bottle Lane or The Poultry - whichever way you wander, there are many quirky and interesting shops and alleyways tucked away to be discovered!

Please note that all of the photographs in this hub are my own and may not be copied, used or reproduced without asking and receiving my permission.

A selection of my images are available to buy as cards and prints at my web page on redbubble (where I am known as cassiegirl)  http://www.redbubble.com/people/cassiegirl 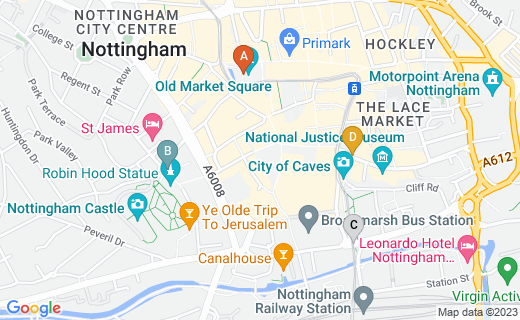 This is the location for the start and end of the tour.

The location of the Castle, Brewhouse Yard museum and Ye Olde Trip to Jerusalem inn.

Location of the waterfront area

The starting point to explore the lace market area.