Wheelock - Wonder of the World

Many things about Wheelock.

Details of the important people and places named after the original Wheelock. The interesting connections between a spaceman, a Latin textbook, a luxurious building in Singapore, a "ghost town" in North Dakota and the Cheshire village of Wheelock.

I have also provided links to other sources of information on the important Wheelocks in the world. Sadly the Village Post Office on the right of the photo closed early in 2010, quickly followed by the loss of the Post Box.

The original Wheelock is a small Cheshire village to the South of the market town of Sandbach in the North West of England. My family have been associated with Wheelock and the Zan works since 1923.

The Sandbach to Crewe road (B5079) runs through the village with three bridges crossing:

The village is primarily residential though some small business and shops continue to thrive serving both specialist and day to day needs. The village has four churches or religious meeting halls serving the Church of England, Methodist, Congregational and Jehovah's Witness communities. There are also three pubs, two fast food outlets and a canal side restaurant.

Reference to Wheelock was made in the Doomsday Book 1087.

360 acres of taxable arable land. Enough for four plough teams. But only two plough teams, four slaves and two riding men with horses. A wood 4Â½ x 1Â½ miles. It was waste land in King Edwards time. Now it is all worth 20 shillings (and clearly a going concern).

Wheelock is still surrounded by the lush green farmland that supports the traditional Cheshire dairy industry.

In 1915 TA Coward in "Cheshire" published by Cambridge University Press described Sandbach as "at once an ancient and a busy manufacturing town, is in the salt country. Its trade is in salt, chemicals, fustians and boots. It has an old church and many picturesque buildings, but the oldest and most interesting relics in Sandbach are its Saxon crosses. Wheelock, a busy salt village, is close to Sandbach." 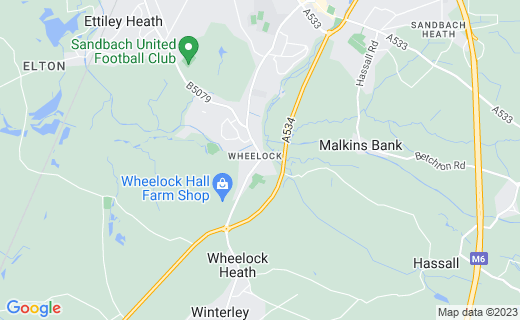 Police photograph of the site of the bomb dropped during WW2 in Wheelock next to Cotton Lane. This is now the field behind Central Tyres and The Nags Head. Extensive damage can be seen to the roof of the Wheelock Methodist Church, beyond the bridge over the River Wheelock..

This second police archive photograph show the view over the flood plain of the River Wheelock towards what are now the Post Office and Newsagents buildings. The soft clay and mud can be seen in the crater - this absorbed the energy saving the village from much more severe damage.

The River Wheelock is a small river in Cheshire in the North West of England. It drains water from the area between Sandbach and Crewe, and joins with the River Dane at Middlewich before running into the River Weaver in Northwich and then the Mersey.

The river is called "Whelocke" in Holinshed's Chronicles of 1578 and "Hoiloch" in the Domesday Book. Its name came from a Celtic word meaning "winding" (Welsh: 'chwylwrch').

It gave its name to the village of Wheelock, where four tributaries merge within 100 metres, before running under the road bridge.

One of the tributaries runs from Arclid Sand Quarry, through the Dingle Lake in Sandbach into the mill pond and under the old railway line and the Trent and Mersey Canal. See the photos below where the stream runs under the canal during engineering work undertaken during Spring 2008.

Work on the mill stream

Zan Industrial Park has been owned by Zan Limited for more than 90 years. It is based around the mill originally used as a fustian cutting centre.

The photo shows the Zan Works in 1925, with the full mill chimney. The chimneys to the right are from one of the salt works. A petrol pump supplying Pratt's Petroleum is next to the old Zan van - a horse and cart are loading up acid in the back of the picture.

Products made under the Zan and Hopol brand names included brushes, mops, soaps and disinfectants, pans, farm gates, shoe and metal polishes, organic fly spray and many other products required by housekeepers, farmers and gardeners. Products were exported all over the world.

Having been used as a manufacturing and merchanting base for much of the 20th century, over the past 25 years it has been converted into industrial, office and storage units for various local businesses.

Units within the industrial park are occupied by

Historically Wheelock used to extract and process chemicals based on salt and brine that lies under much of this part of the Cheshire Plain.

The area known as the Salties - between the railway line and the Trent and Mersey canal used to be the Wheelock Old Salt Works. The area was eventually bulldozed to become a reclaimed green field - now part of the Sandbach Wildlife Corridor.

The photo from 1920 (taken from Wheelock in Times Past - B. Littler 1983) shows the site of the salt works alongside the Trent and Mersey Canal. The Zan Mill is in the back left of the picture. The heaps of waste and ash caught fire during the 1960's and smouldered for many months.

Wheelock as a family name

Are you related to the village or family named Wheelock? A history of the Wheelock surname written by Roderick B. Sullivan, Jr, Dec 2000.

A UK based genealogy site run by Thomas Wheelock provides details of the European Wheelocks and their links to the Americas.

Colonel Douglas H Wheelock has taken the Wheelock name further than anyone else in history when he took part in the Space Shuttle flight STS-120 in October/November 2007.

His NASA biography shows Doug has gained over 20 hours experience of spacewalking.

Wheelock in Williams County North Dakota USA is a ghost town, one of over a thousand in the state.

The following details are recorded at the Guide to Ghost Towns of North Dakota USA. The community was originally established on the Great Northern Railroad in 1902. It was incorporated in 1916. In 1930, the peak population of 115 was reached, and the town began fading and in 1990 only had 23 folks. On January 1, 1994 the town disincorporated.

Wheelock is located on the present-day Burlington Northern-Santa Fe Railroad 19 miles north-east of Williston, in the north-western part of North Dakota.

The organisation Wheelock and Company are based in Hong Kong and were originally started by Captain Thomas Wheelock of New Brunswick as a tug and shipping company in Shanghai. It became a British Hong and developed into a major property and trading organisation in Hong Kong, Singapore and China.

One of the properties it owns is Wheelock Place in Singapore an impressive 21 storey building containing retail and commercial operations.

Frederic M Wheelock (1902-1987) first published the Latin textbook that has become known as Wheelock's Latin in 1956. It is now in its 6th Edition. It appears to be a "popular" textbook when Latin is studied in US schools and colleges. The book contains 40 chapters each based around specific language topics. Critics have argued that it is less useful as a self study text - requiring input from teachers to make full sense of the text - however support notes and background reading are available on the Web. A whole range of support materials have been developed around the original textbook.

A study guide based on the 4th Edition is available online.

A response from the blog of Tim Nichols who took the course in a week.

The Air Ambulance took off from the Zan field in Wheelock, Cheshire at around 17:10 on Sunday 15th February 2009. The field is located between the Zan Industrial Park and Wheelock Rail Trail.

Wheelock and Cheshire Canals at Amazon

A new gas main has been laid across the bridge over the old railway line feeding into Wheelock from Sandbach. The work was supposed to run in parallel with the now delayed bridge rebuilding project.