Where Are The Shetland Islands? (And Other Questions Answered)

Yvonne Spence grew up on the Shetland Isles and still visits family there several times a year.

What’s missing from this map of Scotland?

The French get it wrong too!

Several years ago, an Englishman was running a motel on the island of Yell in the Shetland Isles. He decided to sell up. Instead of hiring a boring old estate agent, he ran a competition in an English magazine. £9 (around $14) bought the chance to own the motel, so long as you knew the answers to a few simple questions about Shetland.

Too few people answered the competition to make it viable, and motel owner dropped the sale. The story made the local paper, not just because of the unusual sales technique, but also because of the wildly wrong competition answers.

One of the questions was, “What is Shetland’s national animal?”

Now, Shetland isn’t a nation, so in a way that question wasn’t fair, but it does have an animal that’s famous around the world. Try the quiz at the end of this article to see if you know what it is. You will learn several fun facts along the way, including why people from outside of Shetland are known to Shetlanders as: “Soothmoothers.” And do read the article first because you will get clues to some of the questions!

So where are the Shetland Islands?

It is maybe not entirely surprising that many people get confused about where the Shetland Isles are. First, there’s the problem of maps. Until recently television weather forecasts used to show a map of the UK with Shetland in a white box somewhere to the east of northern Scotland. Many atlases and maps still show Shetland in variations of this position as you can see in the lower of the two maps above right. The top map shows another common variation, with Shetland nowhere to be seen.

Some Shetlanders decided to get their own back and created maps of Shetland with the rest of the United Kingdom in a box to the side!

Shetland is considerably further north than the French map shows. Its capital, Lerwick, is on roughly the same latitude as Helsinki in Finland, the southern tip of Greenland, and the border of the northern territories of Canada. The northernmost tip of Shetland is just a teensy bit south of Anchorage in Alaska. But unlike Anchorage, it is not under snow for six months of the year. The Gulf Stream, or North Atlantic Drift, a sea current that originates in the Gulf of Mexico and flows north-eastwards is generally given the credit for Shetland’s relatively mild climate. I say relatively mild, because when the north wind is howling with a force nine gale it does not always feel mild! Because Shetland is so far north it has dark winters and very light summers. Around mid-summer it never gets darker than twilight at any time throughout the night. 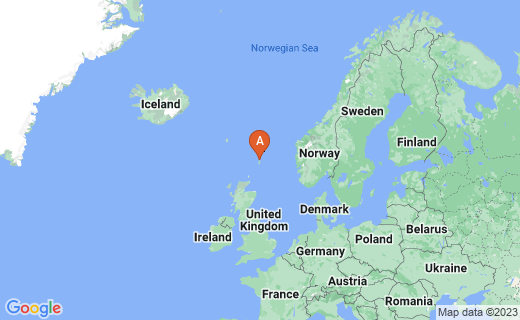 Vikings came from Norway to Shetland, stopping in their way to Iceland or Britain

With a population of around 22,000, the islanders are not likely to achieve world domination any time soon. However, because of their strategic position close to Norway, the United Kingdom and the Faroe Isles, the Shetland Islands have played an important part in enabling North Atlantic domination by one aggressive group of warriors and in helping to prevent world domination by another.

The Vikings arrived in Shetland around 800 AD. They used Shetland as a stopover on their way south to raid and pillage in Britain. They also used it to rest on journeys west to Iceland and Greenland. (Well they needed a rest after all that raiding and pillaging!)

Some Vikings remained in Shetland, conquering its native inhabitants, the Picts (Celtic people.) Mousa island in Shetland has the best preserved Pictish brooch (sometimes spelled brough) in the world. A broch is a round building with thick walls - so thick that small chambers exist within them. Brochs may have been used as castles or may have been places for people and animals to live. Historians can’t agree, and with no Picts around to tell us we may never know their purpose! Since the brochs have low doorways we do know that, like many of Shetland’s native species, the Picts were a very small race.

Shetland also has many important Viking sites, and every summer archaeologists flock to the islands. Unst, the northernmost island has around 30 Norse sites. Television crews from Channel 4’s Time Team have made the trip north several times. 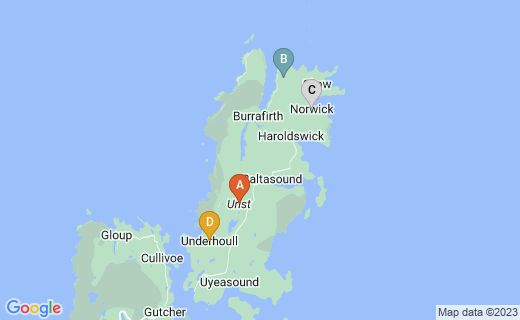 Site of one of the many Viking Longhouses in Unst

Google maps does not recognise Skaw, so I can’t pin it on this map. Look to the north of Norwick (c) and you will see a landmass jutting out into the sea. That’s Lamba Ness, which is in the photo at the top of this article, and where the RAF station was based.

In World War Two Shetland’s position as a gateway between the North Sea and the Atlantic meant that it was the first line of defence for the UK. The Royal Air Force built a base at Skaw on the northeast tip of Unst, just about as far north as you can get in the UK, and from Skaw radars watched the North Sea for German planes. The base was built mainly by civilians, some elderly and some as young as 17. Often construction had to stop for a while when German planes flew overhead, dropping bombs. The first German bomb to land on British soil in World War II landed at Sullom Voe in Shetland. It killed a rabbit.

From 1941 till World War Two ended in 1945, the Norwegian resistance movement and the British Army ran a covert operation taking agents in and out of Norway and evacuating British or Norwegians from Norway. This operated through Shetland and was known as the “Shetland Bus”. At first fishing boats were used, though in 1943 the US Navy assigned three submarine chasers to the Shetland Bus.

In the 1950s with the Cold War in full swing, Shetland was once again in a strategic position and since the RAF station at Skaw had been abandoned a new one was built, with radars on Unst’s highest hill, Saxavord. The RAF station remained until 2006, and the radar still remains, although it is now remotely controlled from the UK mainland.

A Trivial Fact About Unst

Many people believe Robert Louis Stevenson based his map of Treasure Island on Unst. (The island of Fidra in the Firth of Forth also lays a claim, but since nobody lives there Unst’s claim is louder and more persuasive!)

Sullom Voe is famous for more than just a dead rabbit. During the 1970s Shetland’s position once again made it the target of an invasion. This time the invasion was relatively friendly, with planes dropping off construction workers instead of bombs. When the North Sea Oil boom was at its height Shetland’s position was considered perfect for piping oil ashore. Sullom Voe is home to one of the largest oil terminals in Europe. Sullom Voe also handles gas from the Atlantic waters to west of Shetland. In April 2012 the world’s largest pipelaying barge, the Solitaire, arrived in Shetland to lay pipelines taking natural gas to the Scottish Mainland.

One group of invaders who were perhaps not quite so happy to see Shetland were the men of the Spanish Armada. Legend has it that Spanish ships ran aground on several rocky shores, including Fair Isle, the tiny island that is Shetland’s southernmost tip. The traditional Fair Isle patterns that are known throughout the world do indeed originate on this island, and survivors of a wrecked Spanish Armada ship are believed to have brought the patterns with them. They are also believed to be responsible for the dark hair and eyes of many Shetlanders.

A Dowry for a Princess

Although Shetland has been part of Scotland and of the United Kingdom for several centuries, it used to belong to a different county. In 1468 a princess from that country was pledged to marry James III of Scotland. In those days the bride’s family had to pay a dowry and the king of this country had run out of money. He used Shetland and Orkney as a pawn, and in 1472 they became part of Scotland. To find out which country had run out of money just answer question number 8 of the quiz.

Only one of these birds is a native of Shetland. Take the quiz to find out which one.

How did you score? Are you a Shetlander or a Soothmoother?

More about the Shetland Bus is available on Amazon 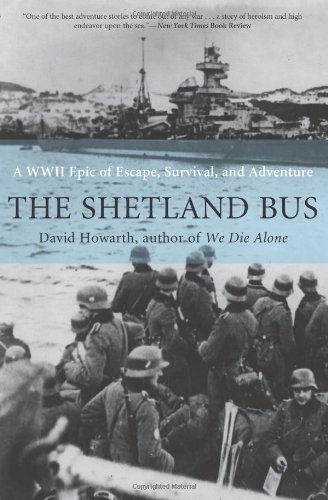 The Shetland Bus: A WWII Epic of Escape, Survival, and Adventure
David Howarth was one of the British leaders of The Shetland Bus operation, so this book is a first hand account.
Buy Now