Where to Swim with Dolphins in Florida

One of the things I've been looking to experience this winter in Florida is a dolphin swim program. There are quite a few different opportunities to swim with dolphins in Florida so I thought I'd share what I've found.

Some programs are more accurately described as dolphin encounters rather than "swims", but most facilities offer a couple of different types of opportunities to get close to these amazing mammals and if you aren't a strong swimmer, then the dolphin encounter programs may be the most suitable situation for you.

For myself, I've already scheduled the Dolphins in Depth program at Epcot in Walt Disney World this coming January. But depending on how the rest of my winter goes, I may add an additional experience somewhere else as well.

Update: I went and did it! Read about my experience at Epcot's Dolphins in Depth Tour

Swim with Dolphins in Orlando

Orlando is one of the most popular destinations in Florida, due to the presence of Walt Disney World, Universal Studios, Sea World and other amusements. But just because Orlando is inland doesn't mean you can't swim with dolphins there.

There are two different dolphin encounters in Orlando. Actually three, if you count the dolphin feeding that you can do at Sea World, but since you don't get in the water with the animals, I don't think it really fits the criteria.

Discovery Cove is part of the SeaWorld group of properties. It's a very unique aquatic theme park for which you need to schedule your visit in advance as they only allow entry to 1000 visitors per day.

As part of the all inclusive admission fee, you're schedule for a dolphin swim at some point during the day for a 30 minute session. Most of that session will not be spent "swimming" though. But it is a close encounter in a small group (maximum 6-8 guests at a time).

For the rest of your visit to Discovery Cove, you can swim or snorkel in their manmade coral reef, swim with the Rays, swim in their tropical river or resort pool, or just hang out on the Discovery Cove beach. Lunch is included with your admission, as well as drinks, snacks and a continental breakfast.

Fin and mask rentals are also included in the admission fee, as are towels, etc. And parking is free. The main package costs $289 with the dolphin swim or $189 without it. Discovery Cove allows anyone over the age of 6 to participate in the Dolphin Swim.

If you're going to Orlando at a busy time of year, I recommend scheduling at least two months before your visit.

Dolphins in Depth at Epcot

The dolphins program at Disney World is called Dolphins in Depth and it takes place at the Epcot Aquarium.

Dolphins in Depth is as much an educational program as it is an encounter program. The tour lasts three hours and concludes with your dolphin encounter in waist deep water in one of the tanks at the Aquarium in Epcot. The dolphin encounter itself is about 30 minutes or so and the rest of the time is devoted to touring the facility and learning about dolphins. Again, this is done with a small group of visitors. I believe the maximum at Disney is also 8 guests.

The $150 Admission includes refreshments, a T-shirt and a photo of your Dolphin encounter. Admission to the theme park is not required and is also not included. You'll meet for your tour outside the park. If you have an annual pass to Walt Disney World or are a DVC member, there is a discount of 15%.

Swimming with Dolphins at Discovery Cove

There are a few dolphin programs located in the Florida Keys. The closest to Miami are in Key Largo, at Dolphin Cove and Dolphins Plus. The facilities are related and offer identical programs. They are near Mile Marker 100.

They both offer a structured dolphin swim and a natural dolphin swim. The structured swim is the type of dolphin encounter you will find in most dolphin programs. A trainer leads a small group in the experience and you can pet the dolphins, have them do some tricks and be in the water with them.

The natural dolphin swim, on the other hand, is rather unique. For the Natural Dolphin Swim, you can get in the water with the dolphins and swim with them freestyle for 30 minutes, but you are not allowed to initiate contact. You can swim next to and around them wearing fins and a snorkeling mask.

This is probably the most natural encounter with captive dolphins available and it would be a good idea to be a strong swimmer. If I'd had the time to drive down to Key Largo, I would have signed up for this program in a heartbeat.

Further down the Keys, you'll find a dolphin program at Theatre of the Sea in Islamadora (mile marker 84.5).They have a couple of different dolphin programs, some that include swimming and some that are just wading; and they also have a Swim with Sea Lions and Swim with Rays experience.

Directions to Theater of the Sea 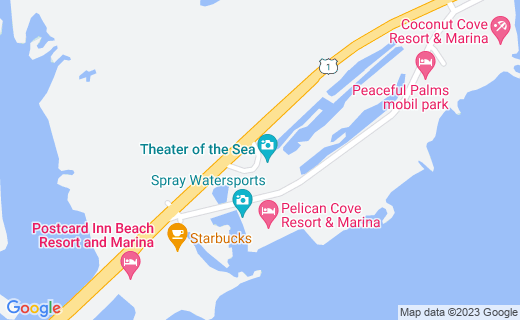 Dolphins in the Florida Keys info

In northern Florida, there's a dolphin swim program at Marineland in St. Augustine. They offer a variety of different types of dolphin encounters, including swim programs, wading programs and "dolphin painting". You hold the canvas while your dolphin friend paints a picture!

You can find out more by visiting the Marineland website and they also take reservations online.