Drive into a Different World at White Sands National Monument

The gypsum sand, which is composed of selenite crystals that have broken into fine sand grains, is blown by prevailing winds and forms the ever-changing white sand dunes of the White Sands National Monument. Although there is little vegetation visible, there are a few hardy species of plants which take root and can grow rapidly enough to avoid being buried by the dunes.

Visiting the White Sands National Monument is like driving into another world as the paved road leads gently into the dune area. The road is soon covered in white gypsum, with evidence that it has been plowed to clear the road of drifting sands. Here and there, low, isolated plants sprout from the sand.

White Sands National Monument, located near Alamagordo, New Mexico, is surrounded by White Sands Missile Range. Nearby is the Holloman Airforce Base and one of the space shuttle landing sites. Despite the military bases and activity nearby, the monument with its miles of sparkling pure white gypsum dunes is a place of quiet solitude.

The fine white gypsum powder dunes cover nearly 275 square miles, half of which are within the National Monument. The gypsum has eroded from the San Andres mountains and washed down or blown into the Tularosa basin 60 miles south.

Driving the RV Through the Park

Although there is no camping within the monument, the roads are accessible to motorhomes, and we drove our RV along the 8 mile scenic drive to one of the large parking areas where we stopped to walk on the dunes and have lunch.  There are several stopping points along the road where there are interpretive signs telling about the history, terrain and wildlife in the park.  The sand is surprisingly cool, even on a warm day, and is easier to walk on than most sand.  We found out later that most sand is quartz based and absorbs heat, but gypsum crystals do not convert the sun’s energy to heat and can be safely walked on even in the hot summer months.

White Sands Missile Range, surrounding the National Monument, is an active missile testing ground. Once or twice a week both the park and the main road (U.S. Route 70) are closed while tests are being conducted.

There must not have been any testing going on the day we decided to drive into the park as we were able to enter and stay as long as we wished. We happened to be there on a Sunday, and were surprised to see families coming in with plastic toboggans that they used to slide down the dunes. It looked like so much fun that we wished we could join them!

Plants and Animals Adapt to Life on White Sands

While the white sand dunes look barren at first glance, there are nearly a hundred species of animals, reptiles and amphibians live in the White Sands National Monument. Many of these animals are nocturnal, so it's unlikely you will see them during a daytime visit. Over the thousands of years the white sands have been in existence, other animals have adapted their coloring to the environment.

White Sands National Monument is at the northern edge of the Chihuahuan Desert.  Because this is a desert area, plants must be drought hardy to survive.  In addition, they must be able to survive being burried in the ever-shifting dunes and fluctuations in temperatures which range from below freezing in winter to over 100° in the summer.

We had lunch in our RV where we had a good view of the dunes and of people coming and going from the horse trailer parking area. When a large trailer turned in and began unloading its cargo, I was fascinated to see a camel being led onto the sand. Along with some others who had noticed the unusual creature, I walked over to get a better look and was introduced to Matilda the camel by her gregarious and friendly owner, George Stone.

It turned out that George and his wife Sherel are family therapists and the camel is part of their pet therapy when working with abused children. George acquired Matilda when she was one day old and about the size of a large dog. They have a very close bond, and Matilda was even a part of George and Sherel’s wedding as the bride, in her wedding finery, rode the camel to the church.

They were at White Sands that day to bring Matilda out to play. George said that the camel loves being out in the sand, so they bring her out on weekends for some R & R. As a small crowd gathered on the dunes around George and Matilda, George told stories about the camel and encouraged people to pet her and pose for pictures. It was delightful to get close to the gentle, long-legged Matilda, but I admit I was a little appehensive when she nibbled at my fingers, obviously looking for a treat. She was very, very gentle, but did leave me with handful of camel drool.

Although the white sands are spectacular and unique in themselves, meeting George and Matilda made our visit to White Sands even more memorable. If you visit White Sands National Monument, do enjoy the Visitor Center, the Interdune Walk and the beautiful scenery.  And if you are lucky enough to be there some Sunday afternoon when George brings Matilda the Camel out to play in the dunes, do go over to say hello! 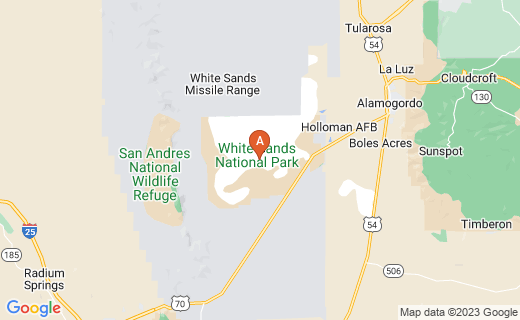