Educated as a microbiologist, trained as an editor, a quintessential nomad soul grounded to the earth. Loves anything that touches her soul

If you want to unwind in a charming hill station away from the hustle and bustle of the city, consider visiting Namchi in South Sikkim.

Spending some days in solitude or with family and friends and basking in its serenity would be quite refreshing.

8 Days, 8 Destinations by Road— An Experience of Its Kind

Itinerary for the Trip—8 Nights and 9 Days

This plan avoids traveling for long hours at a stretch and take several breaks.

Your Favorite Place for Rejuvenation

Where do you prefer to go for rejuvenation?

The Unmatched Beauty of Sikkim

The land is home to people of diverse cultures, such as the Lepchas, Bhutias, Nepalese, and people from the country's different regions.

The beauty of Sikkim whether the breathtaking view of Gurudongmar Lake in North Sikkim or the captivating view of the landscape of Zuluk in East Sikkim is alluring.

Remember these before you head out to Namchi:

Tips for Hiring a Cab

It is better to hire a cab from the registered tour operators approved by the Ministry of Corporate Affairs - Government of India. Check the list on its website.

You can board a train from Sealdah (Kolkata) or travel by flight from Kolkata airport, Netaji Subhas Chandra Bose International (NSCBI) Airport. You will reach New Jalpaiguri (NJP) Station the next morning while it will take a little more than an hour to reach Bagdogra Airport.

You can book a cab beforehand or can hire a taxi after reaching there. The drive to Namchi is through breathtaking scenic views.

Namchi is the administrative capital of South Sikkim.

It is nestled at an altitude of around 5,500 ft above the sea level.

We crossed Melli, the border town of West Bengal and Sikkim, to enter Namchi. Melli is the gateway of South Sikkim when entering from West Bengal.

On the way to Namchi, we had scrumptious breakfast in an eatery with lush green hills in the backdrop.

The landscape and temperature were changing fast as we started ascending.

We reached Namchi after around a 4-hour drive.

Our hotel was close to Char Dham or Siddheswar Dham in Namchi. We had a quick lunch, as the Char Dham ticket counter was about to close.

The complex has opening and closing timings, and charges for entry and parking cars.

Char Dham or Siddheswar Dham is constructed on the Solophok hill.

With closing time was approaching soon, there were only a few visitors inside the complex. We took a tour of the complex at our own pace, there was no crowd at all.

The complex has a car parking zone and a cafeteria. As we had late lunch, we did not try any dish there.

With the daylight gradually fading into dusk, the mesmerizing view of the landscape and the riot of colors in the sky created a magical ambience.

We sat near the complex until the evening slipped into night and our first day ended with a quiet dinner.

We started the second day early, as we had quite a few destinations for the day in our list.

The beautiful Sai Mandir (mandir meaning temple), near to our hotel, was our first stop of the day.

The two-storied building has an amazing decor with the ground floor built mainly for praying and performing religious activities.

The first floor has a marble statue of Sri Shiridi Sai Baba (on a high platform) and paintings of Lord Vishnu (a Hindu god) depicting his ten different incarnations and other Hindu gods and goddesses around the wall.

The ceiling resembles that of a planetarium.

Day 2: Next Stops–Ngadak Monastery and Samdruptse

Next in our itinerary list was Ngadak (meaning promise) Monastery, one of the oldest monasteries of Namchi. No cars were allowed inside the monastery, so we walked a little into the monastery. The spectacular beauty of the monastery never disappoints travelers.

Samdruptse (meaning wish fulfilling hill in the Bhutia language) was the day's third destination. The counter and the covered car parking zone are close to the entrance gate.

First, we ascended the hilly way (walkway) with Buddhist prayer flags fluttering on one side of the road to visit the statue of Guru Padmasambhava sitting on a lotus. Then, we reached an area under the statue and enjoyed the panoramic view of the landscape from there. Next, we climbed the stairs that led to the statue kept on a high platform. The place also has a monastery.

This is the highest statue of Guru Padmasambhava in the world. The intricate design, grandeur of the statue, and engineering involved left us awestruck. The vista of the surroundings from there was breathtaking. We spent a while there as the serenity was unmatched.

Before heading to our next destination, we grabbed breakfast in one of the food stalls near the car parking zone and the food was tasty.

The enchanting view of the tea garden would not only remain ingrained in our memories but also allure us to visit it again.

I think the photograph below gives a glimpse of the beauty.

The land is not only famous for its stunning lakes or waterfalls, meandering hilly roads, snow-capped high mountains, and rich flora and fauna but also for the warmth of the people there who are simple and friendly, its festivals, and the flower shows.

Each year flower festivals are organized in Namchi. Sikkim is known for its wide variety of species of flowers, specifically rhododendrons and orchids.

We did not had much time left before heading to our next destination, Ravangla, these places remained unticked in our list:

What Is the Best Time to Visit Namchi? How Accessible Is Namchi?

Namchi can be visited any time of the year, but the temperature is quite low during the winter. The winter has its own charm and if one loves to appreciate the beauty of Namchi during that time of the year, he or she should carry adequate woolens. Hill stations are better to be avoided during the monsoon.

Namchi can be accessed from West Bengal, Gangtok, Pelling, and other places of Sikkim.

Tourists can also avail Helicopter service provided by Sikkim Tourism Development Corporation (STDC), a division of Sikkim state government, to visit Namchi and Gangtok. Different categories of the helicopter service can be availed at varying rates.

The service may be suspended depending on the bad weather condition, so keep this in mind while planning the trip.

To know about the time, number of people allowed, when to make reservations for availing the helicopter service, weight limit of the baggage, fare, and mode of payment, visit the website of STDC. 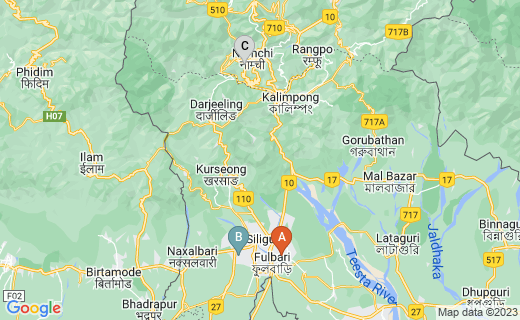 We met our guide and driver here.