The island of Penang off the Northwest coast of Malaysia has plenty to offer visitors, including beaches, a National Park with forest trekking, a hilltop park accessed by a funicular railway and some of the best food in the world.

I am a regular visitor and always find something new to do.

This page takes a look at the area in Georgetown (capital of Penang State) that has been designated a World Heritage Site. Renovation work is a long way from complete but there are plenty of architectural gems and historical oddities to make a very worthwhile tour.

The Chinese started arriving soon after the British East India Company founded a trading post on Penang Island in 1786. Sometimes, whole clans or villages would arrive, building their own temples and preserving their own histories.

The clan temple below bears the name of the village in China where the clan originated from.

The Cheah Kongsi Clan moved en masse from China in the 18th Century after a narrow escape. An army was besieging their town and all seemed lost. Quite by chance another army under the direction of another warlord just happened to pass by.

With a little encouragement and considerable wealth exchanging hands, the new army defeated the besiegers.

Renovated in the late 1990's after falling into ruin, the Thean Hu temple is remarkable for the its carved stone panels, figures and pillars.

The British left in 1957 after realizing there was no more money to be made from Empire. Independent Malaysia is now well on the way to being a first world economy and can afford to preserve some of the charming relics that the Europeans left behind.

An interesting museum near the Catholic cathedral covers the occupation of the Island by the Japanese in World War 2, as well as illustrating life in the colonial periods.

Malay Muslims make up around 40 per cent of the population of Penang Island- roughly equal to the Chinese in terms of numbers.

The earliest mosque (pictured directly below) dates from around 1800. The very grand, Kapitan Keeling Mosque was designed by a German. Which I have always found to be strange.

Beads and saris, naan bread and tandoori chicken. The occasional holy man. It is impossible not to like Little India.

Little India is also a good place to find an inexpensive tailor.

Love Lane suggests that illicit activity of a sordid kind was popular here in the past -- which is strange, since it is right next to the Catholic Cathedral and Convent School. But then maybe this is no coincidence.

In the sixties and seventies it attracted hippies looking for somewhere cheap to stay.

Nowadays, it is still backpacker central but the hostels are certainly getting more expensive as they are given a face-lift.

You can still get an air-con room for under twenty dollars a night and a decent room with fan for about ten dollars.

A room with en suite shower and hot water will start at around thirty dollars a night. 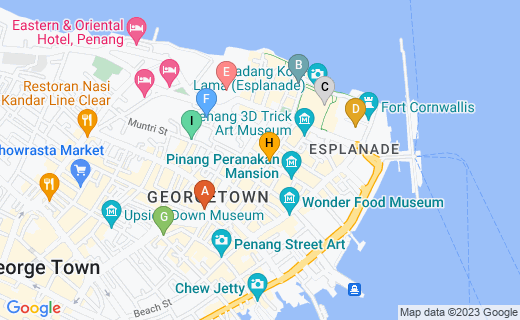