Utah is a fantastic state filled with natural wonders, including many beautiful state and national parks. We loved vacationing there!

This article will introduce you to the wondrous sights that are to be found in Zion National Park in Utah. Monolithic domed splendor will be discovered there as well as meadows, waterfalls, hiking trails and more. Many pictures will be presented as well. Hope that you enjoy this scenic portrayal a fraction as much as we did while there in person.

In an earlier plane ride my mother, niece and I had seen Kolob Canyons from the air. Now, from Cedar City we explored it by car.

Kolob Canyons is a part of Zion National Park and is located in the Northwest portion of the park.

If one has the time and energy, there is a 14 mile round trip hike to Kolob Arch which happens to be the largest arch in the world.

My mother is not much of a hiker, and our time allotment for this trip would not have allowed this in any case as our desire was to see all 5 of the national parks in Utah on our two week trip.

Kolob Canyons is primarily composed of a deep red hue of Navajo sandstone and is less frequently visited than the southern part of Zion National Park.

All of the many box canyons in Kolob were easily viewed from the perspective of seeing it from the air. One would have to do some significant hiking to get the same impression on foot.

In order to more easily see more of Zion National Park, we changed locations and rented a room in Springdale.

We had been staying in Cedar City which was more convenient for seeing Kolob Canyons.

Staying at Flanagan's Inn while in Springdale was most enjoyable.

Springdale is located at the southern entrance into Zion and the views from our motel were already stunning.

The Kolob section became part of the National Park in 1956.

The geology of the area is interesting. Approximately 10,000 feet of accumulated sediment originating as long ago as 240 million years has formed the basis for what we see parts of today in Zion National Park.

This area used to be a fairly flat basin that was almost at sea level. Deposits of sand, mud and gravel from nearby mountains was carried to this area by streams that meandered through the adjacent meadows and desert lands.

Winds whipped up giant sand dunes. Over time all of this solidified and the weight caused the sediments to compress and subside.

An inland shallow sea helped to carry and deposit minerals into these layers of sediment which eventually cemented the layers into stone. Over the course of about 10 million years this area was uplifted due to a shifting deep within the earth and areas that used to be sea level are now as high as 10,000 feet above sea level.

The Virgin River that runs through what was to eventually be called Zion began its carving and sculpting of the majestic walls of the mountains and canyons that we view today. Rain, wind and erosion make this an ever changing landscape.

Zion is so awe inspiring and viewing the monumental walls, cliffs and overlooks in the light of early dawn to dusk makes this an ever changing palate of colors and moods.

Obviously one could spend weeks or months exploring just this one park. Offered are a variety of trails from short and easy hiking to long and arduous. Much of this beauty can also be viewed from the road, but to enjoy it more intimately, some hiking would be my recommendation if possible.

Weeping Rock is an easy half mile trail that my niece and I enjoyed.

The water comes right out of the rock supporting ferns and other plant life.

One could stay fairly dry under the overhang or choose to let the water drip on you and cool you off as many people on the trail ultimately chose to do.

On the Weeping Rock trail in Zion National Park While my mother waited by the scenic resting place by the Virgin River below, enjoying the sight of people floating by in rented inner tubes, my niece and I hiked to the Lower and Upper Emerald Pools.

It is quite strenuous hiking to get up to the Upper Emerald Pool. Most people that made it that far were happy to cool off in the water.

The scenery at every twist and turn in the trail was gorgeous. After hiking back down from visiting the Lower and Upper Emerald Pools we rejoined my mother who was patiently waiting.

Next we drove to the area called the Temple of Sinawava.

It is a ceremonial place that aboriginal Indians used for their special ceremonies.

There is a great profusion of colors in the rocks and the trail takes one alongside the river. One can hike alongside and then into the river to see more fantastic scenery. While we did not do this, the video below will show what beautiful scenery can be seen.

The Great White Throne in Zion

Towering 2,447 feet above the canyon floor, the Great White Throne in Zion National Park is the largest monolith in the world.

Through the years many people have been awed by this site and feelings of reverence have been attached to the beauty and grandeur of this striking location.

There is such striking beauty at each and every turn of one's head in this park whether on a trail or on the road!

The east end of Zion National Park has an entirely different character.

One goes through the 1.1 mile Zion-Mount-Carmel tunnel which was blasted out of solid rock to get there.

The tunnel was built in 1930 and has 6 "windows" that were broken out at various intervals.

The rocks in the east end of Zion park are entirely different looking.

It is hard to believe that the differences are so dramatic!

Ancient sand dunes that were sculpted by wind and rain have formed these striated rocks of various colors and shapes.

Many were flat and were fun to walk on and explore. Amazingly, my niece was getting tired and decided to keep my mother company while I took the one hour Canyon Overlook Trail by myself.

This trail is just east of the Zion - Mt. Carmel highway.

It is considered to be an easy and self guided trail that ends with spectacular views of the lower Zion Canyon and Pine Creek Canyon.

I was happy that there were others on the trail as in places I would have wondered exactly where the trail was leading. Some people were climbing rocks in one place and others chose other rocks to navigate. Seeing people ahead of those of us on the trail at least gave us the general direction to pursue. The spectacular scenery viewed while on the Canyon Overlook Trail was definitely worth the hike.

Most of the tourists on the trail with me that day were speaking foreign languages. Our national parks are enjoyed by people from all over the world.

If you have not yet visited Zion National Park, I hope that this inspires you to add this to your vacation bucket list.

We saw more of Utah's parks and each of them has their own special kind of distinctive beauty. They are addressed in separate posts.

Zion is truly a spectacular national park worthy of an initial visit and then returning ones!

In places the wet rocks have lichens clinging to the rock surfaces. Rocks are always beautiful when wet, and the plant life added to the beauty when viewed up close.

Lichens are formed out of millions of algae cells held together by fungal filaments.

They are a source of food for animals and have even provided the same for humans at times.

Some are used medicinally or as dyes in various parts of the world.

In heavily polluted areas lichens do not readily grow. Thus air quality can be determined by the presence or absence of lichens.

See even more images in the videos below. You just might want to pack your bags and plan a visit there!

Suffice it to say Zion National Park is one of many wonders in Utah awaiting your own personal discovery. If you are looking for monolithic domed splendor you need look no further!

Would you like to see Zion National Park in person?

Where Zion National Park is located. 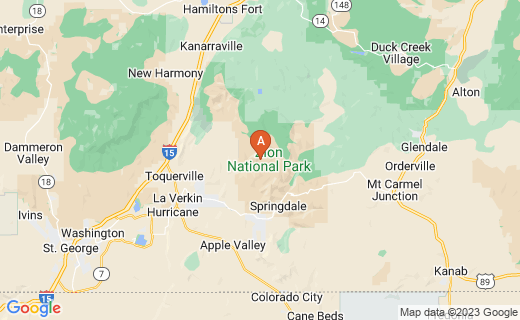 Comments are welcomed. Thanks!