Do you want to know more about Australia? Would you like to have fun while learning about the countries of the world? In an effort to make world geography more meaningful and memorable, I have provided everything you need to locate Australia on a map, cook an ethnic meal, watch YouTube clips on Australia, color the flag, create an Australian craft, read a book about Australia, and more! This is part of a fun series of lessons covering world geography. You can find the links for all the countries at Around the World in 26 Letters.

Locate Australia on this map of Australia/Oceania. Use this map of Australia to label the capitol, Canberra. Mark other relevant features (rivers, mountains, famous locations, etc.) if desired. If you'd like to spend a bit more time researching the country, you can add the language, currency, type of government, religion, and/or famous landmarks. Write them on the back of the map. You can easily find all this information at http://en.wikipedia.org/wiki/Australia.

The following animals were first found in Australia: the emu, the kangaroo, the kookaburra, and the koala. The platypus is only indigenous to Australia.

Australia is the largest inhabited island as well as the smallest and the least populated continent of the world.

There are more than 150 million sheep in Australia and only around 20 million people.

Because the rainwater in Tasmania is some of the purest in the world, over five tons of the water was transported to Seoul, Korea to provide drinking water to Olympic athletes. Tasmania is also considered to have the best air in the world.

If you have children (or a spouse) who isn't fond of seafood, you can make Australian Meat Pies instead of Shrimp on the Barbie.

Shrimp on the Barbie

The "barbie" refers to the BBQ/grilling. If you're making this when the weather isn't BBQ-friendly, you can simply broil the shrimp in the oven for about 3 minutes per side.

Damper is a traditional Australian bread, made without yeast, and traditionally cooked over hot coals. The original recipe calls for "tasty cheese", which is the Aussie term for "sharp cheddar cheese" as used in the US.

Sticky Toffee Pudding is originally a British dessert, but it is quite popular in Australia as well. It is a moist cake topped with a caramel-like sauce. Yum!

Read a book about Australia

D is for Down Under: An Australia Alphabet (Discover the World)
This charming 40 page picture book does a great job of capturing many aspects of life in Australia. Each page includes a sidebar with additional information.
Buy Now

Why Koala Has a Stumpy Tail (Story Cove)
This is a cute 24 page picture book that re-tells the legend from Australia about how the Koala got its tail.
Buy Now

A didgeridoo is a long tubular wooden musical instrument used by the Aborigines. Make & decorate one using a cardboard tube by following the directions at dltk-kids.com or create the aboriginal dot art as described at dltk.kids.com. Find even more great activity ideas at activityvillage.co.uk/.

Pray for the people of Australia

To find out about the religious nature of Australia and specific ways you can pray for the country, go to http://www.operationworld.org/country/aust/owtext.html .

The flag of Australia

Print and color the flag of Australia and learn the history and meaning of it from http://en.wikipedia.org/.

Where is Canberra, the capital of Australia? 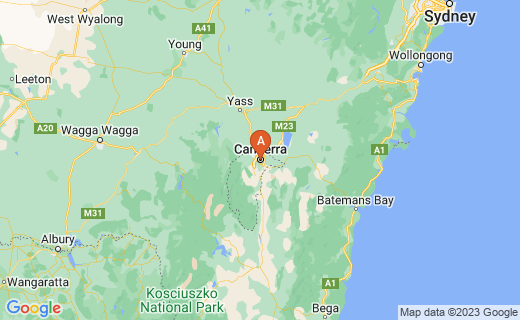 Have you ever visited Australia?

Other countries starting with the letter A

Would you prefer to study a different country? Try one of these.

Ready to visit other countries?

Go to Around the World in 26 Letters to find links to all the countries we "visited." Each webpage features a menu, craft, books, video clips, worksheets, and more!

Comments, questions, or ideas? - I LOVE hearing from you! Please leave a note to let me know you dropped by!