In Search of the Real Spain

Malaga airport in Andalucía is one of the busiest in the world and during the summer months, it is a popular destination for tourists, eager to sun themselves on the nearby Costas. However, a trip to the region at any other time of year can be just as fulfilling if you are prepared to give the beach a miss.

In mid-spring of 2010, I spent a week in a Spanish mountain retreat in the heart of Andalucía with two friends (actually it was only six days because a certain Icelandic volcano with an unpronounceable name conspired against us, causing our Ryanair flight to be cancelled).

Our trip was a taste of the real Spain away from the more widely known places on the coast that are commonly known as the summer playground of the Brits.

I'd flown to Malaga many times previously but it had only been a stopover on the way to Morocco where I own a holiday home. This time it was good to admire what was there instead of just 'passing through.'

Away from the Costas

An away-from-it-all break was just what we needed as well as a welcome change from perpetually inclement English weather. I was expecting to wear my cardigan and was quite looking forward to a holiday that for once wasn’t going to be beach-based.

Arriving in Malaga from Leeds Bradford Airport Rona, Josie and I stayed one night in a basic ‘Hostal’ in the heart of the city. That evening we had time to walk around the centre and discover the highlights of Malaga. A visit to El Pimpi’s restaurant for tapas and a glass or two of sangria was a welcome treat after a day’s travelling. Here you can see the signatures of well known Spaniards scrawled on the ends of barrels stacked up against the interior walls.

The cathedral at Malaga looked magnificent lit up at night as well as the Alkazaba Moorish fortress above the town. By now I'd begun to regret I'd missed all this on previous trips to Malaga but on those occasions it had merely been one of those places en route to the port of Algeciras where I would catch a ferry over the Straits of Gibraltar to Morocco to Tangier.

A region of Outstanding Natural Beauty

The Antequera region offers so much more than a beach holiday. During our week at my friend’s little ‘Casa’ near Lake Vinuela we were able to see so much more of the hinterland behind the coastal resorts and had a chance to discover the real Spain that the tourist often does not give much thought to.

The lake at la Vinuela is, in fact, a man-made reservoir created in 1981. With Mount Maroma as a backdrop, the lake is perhaps a rare example of man harmonising with nature. It is possible to drive all the way around the lake and take advantage of the spectacular scenery from many vantage points. There are picnic areas and camping and various places to enjoy a leisurely meal at any time of day.

One afternoon we drove to a desolate spot called El Torcal but Rona kept quiet as to what we could expect to find there. Josie and I just thought it was another mountain top location from which we would get an excellent view over towards the Costas and the Mediterranean. Rona’s surprise worked. To our utter amazement at the top of a long and winding road was a rocky plateau to rival that of ‘The Lost World’. In fact, I wouldn’t be at all surprised if this is where Sir Arthur Conan Doyle got his inspiration from.

Spain in May is Delightful

At El Torcal there is a visitor’s centre which has interactive displays to demonstrate how this limestone plateau once lay at the bottom of the sea. The visitor can learn how the weird and wonderful rock formations came into being. The prehistoric surroundings have to be seen to be appreciated and there is nowhere quite like it in the world. Three walks of varying difficulty can be taken through the rocks. We opted for the easiest which takes about an hour. This natural park at El Torcal can be found near the medieval town of Antequera

The next day we experienced the complete opposite of being on top of a Mountain. Rona took us to visit the Caves at Nerja on the coast. Here you can discover ancient stalagmites and stalactites on an hour’s walk through a subterranean cavern. Nerja itself, with its trendy shops and scenic coastline and the famous Balcon de Europa viewpoint, offers many points of interest. Here too is a complete Roman viaduct and a donkey sanctuary.

last but not least, the rustic little casa where we stayed is again worth more than just a mention. Lovingly restored by Rona and her husband at great expense in terms of time and money, this charming mountain home boasts uninterrupted and extensive views over towards the mountain village of Comares, where we were to visit another day. A walk to the summit following the route marked by a series of footprints in the paving is well worth the effort. Here above terracotta rooftops, you can see for miles on a clear day.

On the evening of our last day, we were privileged to see the procession of Saint Isidro (the patron saint of farmers) through Alcaucin, one of the mountain villages. We were inadvertently showered with wheat when the offering was thrown over the icon of the saint from one of the balconies of the quaint ‘Pueblo Blanco’- a typical Spanish village of white houses. As you follow the locals through the village they will appreciate and welcome your participation and you can enjoy the beautiful geraniums that decorate the windows boxes.

It certainly was cardigan weather when we visited but the amount of uphill walking we did made us generate our own warmth and would not have been possible in the heat of the summer.

During that second week of May, I found southern Spain at its most beautiful when the trees were in blossom and the region was not as busy as when the season is in full swing. We had hardly any rain and certainly never needed to run for shelter.

The mountainous region between Malaga and Anteqeura is a place you can visit time and time again and there will always be something new to discover. I am sure I will return and if not to Rona’s casa than to somewhere very similar. 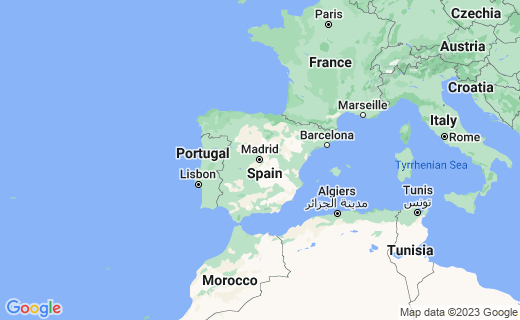