A Walk At Napatree Point, RI

I like to get outdoors and walk, especially if my surroundings are beautiful. I enjoy sharing my favorite spots with others.

As you walk along the Atlantic Ocean side you see rolling waves, smell clean salt air, and can listen to the sound of the surf. The sand along the water is packed down, especially at low tide. It makes for easy walking.

If you walk all the way to the end on the ocean side, it is about 1.5 miles to the point -- making the round trip 3 miles.

I would suggest this walk for after Labor Day or before Memorial Day. Parking is difficult to impossible during the summer months when people flock to the beautiful beach. Non-resident parking is never allowed on the side streets.

The beach is full of sunbathers and swimmers. It's pretty hot walking on the sand in the blazing sun of summer.

Beginning Of The Walk - The Path To The Bay Side.

We took this walk on November 13, 2011. In November all the shops in the Watch Hill section of Westerly, RI were closed with the exception of two tee shirt shops. Therefore, we were able to park on the street. In season, these spaces are only 2 hour parking. Also, off season you can park in a small lot adjacent to the water. In season, you would have to pay for parking, if you could find a space.

The temperature here is pretty comfortable. The ocean water is still warm from summer. Even though there is a breeze, it is not cold. Dress in layers. It will probably be warmer than you think.

From the street, we walked across the parking lot, behind some cabanas and there we found the path to Napatree beach.

We started out on a path that took us to the bay side of Napatree point. (Shown in the photo)

Photos Along The Little Narragansett Bay Side

On the Atlantic Ocean Side Of The Point

After walking halfway down the bay side, we take a path over to the ocean side. There are several opportunities to do this.

Off in the distance we spot someone windsurfing. A little while later we see two more young men in wetsuits coming down the beach with windsurfing equipment.

The sand is very smooth and hard packed to walk on.

Little sandpipers are along the shore. They are fun to watch. They scoot out as the waves go out and then run back in before the wave can hit them. There are four of them and they look as their marching is coordinated. They are so fast, I couldn't get a picture. They eat small invertebrates picked out of the sand.

We were hoping to find a path to the bunkers left over from Fort Mansfield. We found one path but it was so closed in with brambles, we would have needed a machete to get through.

Ocean Side At Napatree Point

Here's a checklist for your walk 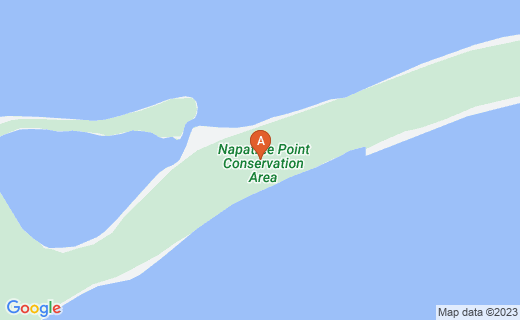 In this video, the makers explore the rumors about Fort Mansfield being haunted.

They also have some beautiful moving pictures of the waves