I was looking at pictures of pristine natural beauty. It was a temperate rain forest. There were native Japanese trees, moss-covered rocks, winding rivers and white waterfalls.

Just looking at these were a welcome relief from my urban life in Japan. "Where did you take these?" I asked my fellow expat as I handed the pictures back to him.

"It's the Akame 48," he responded. He explained that the Akame Shijuhachi Taki is a collection of waterfalls in the Muro-Akame-Aoyama Quasi-National Park in Mie Prefecture.

These falls are formed by the Nabari River as it flows through part of the park. A visitor can easily see them all in a few hours by hiking the forest trail and back--a total of four kilometers (2.5 miles). What makes it special is that the area is so well-preserved. It's an excellent example of ecotourism in Japan.

I had to go. I told my girlfriend and she already heard about the Akame Forty-Eight Waterfalls. She always wanted to go but didn't tell me because she thought I wouldn't be interested, after all it isn't a festival or shrine.

The Akame Shijuhachi Taki is beautiful all year round. In winter we can see ice-covered waterfalls. Spring hikers enjoy warmer temperatures and occasional sakura (cherry blossom tree) blooming. The summer rainy season shows the waterfalls gushing at full force. Autumn, its most popular season, is when the forests alight with spectacular foliage.

Welcome to the 48 Falls of Akame!

What does Akame Shijuhachi Taki mean?

It's a mouthful so let's break it down.

"Akame" means "red eye" in Japanese. The idea is that centuries ago a man named En no Ozunu saw Fudo-myoo (the god of fire) riding an ox with red eyes in these forests. "Shijuhachi" is the Japanese word for the number "forty-eight." Finally, "Taki" means waterfalls.

There's no need to count the number of waterfalls here because shijuhachi also means "many."

You'll see a statue of the red eye ox along with the legend written (in Japanese) on a wooden tablet above it before you hit the trail. There's no need to leave any money here but some people do. I had a lot of change that day so I splurged.

Even before I entered the Forty-Eight Waterfalls I heard them. The sounds of rapids were with me for the entire trail. It dampened the sounds of any birds or wildlife but it also kept us hikers quiet. Talking took more effort over the sounds of the falls so it was easier to stay quiet and reflect on the beauty of the scenery.

Also the river rapids and the forest canopy created a special micro-climate. I visited in early autumn so the humidified air was welcome from the dry smog of the city. Summer hikers would appreciate the shade of the trees and how it kept the water and lands cool.

So where were the "gaijins"? There were few hikers to begin with but it seemed like I was the only foreigner there. This was understandable. Between Mie and Nara Prefectures, the Akame Shijuhachi was a bit out of the way for tourists. Tourists in the Kansai area cities would do fine staying there. Still I expected to see at least a few other expats. Maybe another time.

It looks like the locals don't expect much foreign traffic either. Almost everything is in Japanese, hardly anything is in English or Chinese. I was thankful that my Japanese was getting better and that the hike itself is pretty straightforward.

What I didn't expect was such mountainous terrain. This isn't mountain climbing but my leg muscles got a workout as did my cardio. The way back is largely downhill, which means a lot of high-impact action. By the end of the day my knees were aching but it was the best 48 waterfalls I'd ever seen.

A peek into Akame 48 Waterfalls

How to enjoy the Akame Waterfalls

Here are a few tips to remember so you can enjoy your visit. Most of it seems like common sense because it is. Still, take a look and don't say I didn't tell you:

What to wear and what to bring

Believe it or not there's more at the Akame Shijuhachi Waterfalls. Centuries ago, this forest was the training ground of the Iga Akame ninja assassins.

The forest provided countless places for ninjas to practice their hiding. The terrain challenged their strength and balance. The sounds of the waterfalls forced them to refine their senses.

No ninjas today but there are a handful of shops that sell ninja souvenirs--fortunately nothing dangerous. For those who want a hands-on ninja experience, there is a day-long course at the Akame 48 Waterfalls Ecotourism Center. For more information there is a link below.

The Japanese Salamander Center is a museum that houses several large, living specimens and provides more information about the species. It's easy to find--you need to go through it to start the Akame 48 hiking trail!

Where are the Akame 48 Waterfalls? 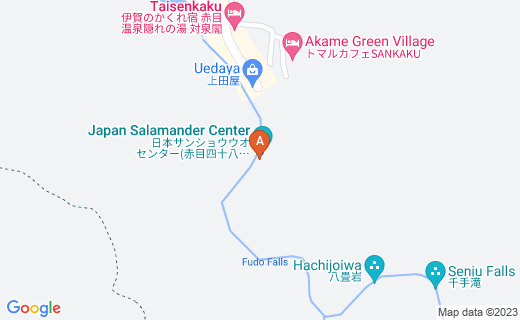 How do I get to the Akame Shijuhachi Taki?

Visiting the Akame Forty-Eight Waterfalls is easy but may take time depending on where you are. We went by car from Osaka. It took about two hours including daytime weekday traffic.

Mass transit takes longer but bus and train tickets cost less than highway tolls and gasoline. Unfortunately it's a bit of a hike from the closest bus stop. Take a look at the map to the right for directions.

Once there the entrance fee for the Waterfalls is 400 yen for adults and 150 yen for children. Not bad considering that it includes the Japanese Salamander Center.

Would you come to Akame Shijuhachi Waterfalls?

Would you come to Akame Shijuhachi Waterfalls?