A Trip to Amazeno in Lazio Region in Italy

Looking for great places to visit in Italy in Lazio region, near Rome? Amaseno is a real gem of the world’s historical heritage and an example of rare medieval beauty. The artistic, religious and civil heritage of this village belongs mostly to medieval periods of history (especially 12th and 13th century). It is particularly famous for the reliquary vial of St. Lawrence. The tranquility and nature of Amaseno makes it a perfect destination for those who want to escape the stress and chaos of everyday life and enjoy the charms of medieval architecture.

Amaseno is a small Italian village located in the Lazio region (central Italy). It is one of the largest among the 91 municipalities in the Province of Frosinone. The village lies in a valley once called "The valley of San Lorenzo," surrounded by the Lepini and Ausoni mountains.The highest mountain peak of the surrounding Amaseno mountains is Monte delle Fate (Eng. Mount Fairy).

If you want to access the village from the motorway or through Vallecorsa, you can drive in these directions:

Nearby villages and municipalities with a history dating to periods before the Romans are: Priverno, Roccasecca dei Volsci, Ceccano.

Big cities and distances from Amaseno 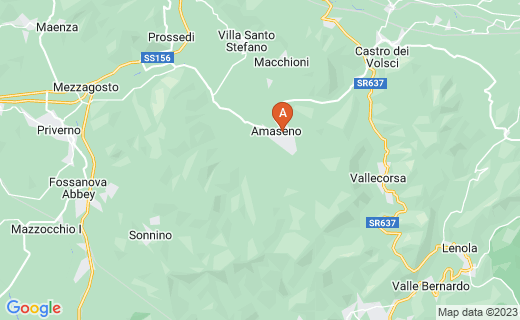 Amaseno in the Lazio region, Province of Frosinone, Italy

History of Amaseno in a nutshell

Why you should think of Amaseno as one of the best places to visit in Italy? A short walk through the history of Amaseno may help you understand the reasons why Amaseno is an increasingly interesting Italian tourist destination.

Historians and researchers agree that Amaseno doesn’t originate from the Roman period; the position of the village wasn’t safe or typical for the strategies employed during the Roman period. Most of them agree that the village was set up around 800 AD near a monk abbey, which was typical in medieval times. At the time, barbaric invasions were a great threat to people and monasteries were seen as the safest places to be around.

Amaseno was called San Lorenzo (St. Lawrence) and the valley was known as the Valley of San lorenzo until 1870, when the name was changed to Amaseno after the Amaseno river.

The first documented data says that Amaseno (St. Lawrence at the time) was the property of the Earls of Ceccano (Conti di Ceccano), and then of the pope.

After 1165, the village was burned during the war between Barbarossa and the pope. The 17th and 18th century were characterized by progress and prosperity, but the next century brought instability with the conquer of Italy by the French.

The inhabitants of Amaseno have always been of Roman-Catholic religion, and the village is rich with churches and sacral traditions.

(Eng. The Church of St. Mary of the Assumption )

An example of typical primitive Gothic art,the basilica-like shaped church of St. Maria was built with local squared limestone and using the technique of chiselwork. It is considered the first Gothic-Cistercian monument in Lazioand the first national monument of that primitive ogival architecture (particularly curves that form Gothic arches) introduced in Italy by French Cistercians (also called the Bernardines or the White Monks, a Catholic religious order of enclosed monks and nuns).

Table 3. The building of the church of St. Mary of the Assumption and related events in a chronological order

This church is a must see place in Italy because it houses interesting wall paintings from the thirteenth to the seventeenth century, stone and wooden sculptures, paintings, frescoes, statues and shrines, for example, rural tabernacles, the dead Jesus carved in wood, The Madonna between Saints Ambrogio and Nicola, The large canvas depicting S. Lorenzo.

The Blood of San Lorenzo

One of the most interesting tourist attractions in Italy takes places on St.Lawrence’s Day on August 10th in Amaseno, and the church of Saint Mary is well known because it houses the precious relic of the blood of San Lorenzo.The relic is a mixture of 50g of St. Lawrence’s blood, fat, cinders and a fragment of skin. The blood, which is coagulated during the year, melts becoming liquid every year on August 10th and this miraculous event has been scientifically proved and verified.

The Church of St.Peter the Apostle

The church dates from the 14th century, but it was destroyed and rebuilt numerous times until the present day. Only the bell tower preserved its original shape. The church was also mentioned in historical documents regarding tax payments. Some parts of the church are built in Gothic style, but it also has three naves and an apse dating from the 18th century.

(click column header to sort results)
Table 4. The building of the church of St. Peter the Apostle and related events in a chronological order

The nativity scene in Amaseno, the Church of St. Mary of Annunciation The Crib in the Church of La Madonna dell’Annunziata

(Eng. The Church of the Lady of Annunciation)

The structures of the church are of a Gothic-primitive style. The nave built in 1871 was destroyed in 1944 when Amaseno was occupied by the war oponents. The church houses an antique wooden statue representing the Virgin holding the Child in her lap.

The church became the home of Neapolitan presepio (nativity scene, manger scene, crib) in 1985. A group of young people from Amaseno make a new nativity scene every year; the group known as the "youth of the crib" (i ragazzi di presebe) won a prize for their remarkable work in 1998 and in 1999. They make great reconstructions of streets, stairs, balconies, squares and houses, and inhale the life into the scene by using taped sounds, conversations, songs and beautiful lights. I saw the 2011 crib – it was the best crib I’ve ever seen!

The Old Town is characterized by a wall with towers and five gates to the city center. The village is merged around the Piazza della Vittoria, which can be accessed through Porta Santa Maria. Besides other churches, monuments and places to visit and see, walking the streets of Amaseno is a wonderful experience to itself!