July has always been a time when we try to get away for vacation. Our anniversary falls in that time period, so it usually works out great for us. However, with gas prices being so high and our schedules not jiving this year, a staycation seemed to be the ticket for our holiday.

Although we would have liked to take another trip to Hawaii or the Bahamas, romance was still in full bloom for our anniversary date that began on a Friday evening and lasted all weekend.

We decided to do everything "off the cuff", meaning nothing major planned but with some things in mind. Out of the many indulgences we would experience that day was a picnic in a park we had never visited.

It was a Friday afternoon around 4 pm when my husband got home from work. We had already decided that we would eat out, but didn't know exactly where our anniversary date was actually going to take us. The sky looked cloudy, but so far no rain.

Copyrighted Material by Favored1. Do not copy. Photo credit byFavored1 or Amazon unless otherwise noted. This artwork is licensed under the Creative Commons Attribution-ShareAlike 3.0 License.

Have you ever taken a staycation?

Our first staycation place would lead us to a chocolaty treat. For the past few months I have been really craving some good fudge. There used to be a great little shop in the center of town that made the best homemade fudge. You could sample which ever kind you liked before making a purchase. I loved that shop; sadly it had to close due to the market crunch.

Besides ordering fudge online (I'll share that below), the only other place that sold fresh fudge was at the Hallmark store. So we stopped in for this creamy treat. When we arrived I looked all over the store, NO FUDGE! The store was under new management and they decided not to carry it any more.

We were disappointed, but the trip wasn't a waste. I found a few gift items for my sister's upcoming birthday, and we discovered they also owned the ceramic shop next door.

Something my husband and I have enjoyed doing for many years is ceramics. The Hallmark store was joined to the hobby shop so we decided to take a look around. I wanted to make another Christmas tree like we did years ago, and found out they were holding classes for items I had never done. The classes were only $15 and it included the project piece; that's pretty good I thought.

We have ordered this fudge so many times, and it is consistently delicious.

What I like about this package is that you get three kinds of creamy fudge to share, plus the tin us reusable. I often freeze cookies in my tins.

Use the tins for storing items, freezing, crafts or sharing handmade gifts. 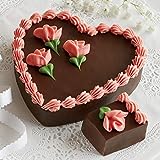 Heart-Shaped Fudge from The Swiss Colony
Swiss Colony makes it easy to treat others or yourself with their creamy fudge. This rich, chocolate fudge is in the shape of a heart with hand decorated roses for a romantic touch. Container size: 14 1/2 oz. net wt.
Buy Now

Strolling through the city.

Leaving the ceramics shop we decided to take a stroll down a side alley where there was an Artsian Bakery. Instead of baking a cake or buying one, we thought specialty cupcakes might be nice for a change. Plus it would keep us from eating an entire cake.

Once again, we struck out and the shop was closed. I guess we shouldn't have spent so much time in the ceramic shop, but hey, this was a "no plan" event, so we went with it.

We did get to see all the artwork that was painted on the walls though. We'll have to come back and enjoy this little village at another time.

Rain, now? What about the picnic?

On our way back to the car it started to rain, so the picnic and park were also a bust. By now we were getting hungry and I couldn't decide what I wanted to eat. My husband likes Ryan's Restaurant, so we decided to go there.

When we got to the restaurant it was pouring so hard that we sat in the car for a few minutes. It was worth the wait. His choice of places to eat turned out to be ok, because we were able to get some fudge. (The pieces may look big, but they were actually only one inch. Yes, I measured them for the photo.)

After dinner I wanted to surprise my husband with a special gift. He had no idea that he was about to get an anniversary wedding ring. He picked out a gold band that he liked and we ordered it. They didn't have one in his size in stock, so he'll have to wait for a few weeks for it. The best part of ordering the ring was that the sales girl kept saying how young we looked.

He has other wedding bands, but I wanted to get him a new one like he did for me a few years back. Mine was a diamond band, but he liked a plain one instead.

Card shopping was next on the agenda. Instead of buying or making our cards (like we have done for years), we decided to do something different by buying one card only and sign it to each other. Actually I liked the idea and thought it was kind of funny.

However, this created a problem. Neither of us was willing to pay $5 for a card we really didn't "love" even if it was from a fancy store.

We looked through several cards, showed them to each other, said Happy Anniversary, gave kisses and then decided to spend the money on cheesecake! Problem solved ... for the time being anyway.

Since we had to pick up a few things at the grocery store anyway, we opted for the cheesecake by the slice package (not the entire cake which we have done in the past).

Real New York cheesecake is probably the best I've ever eaten, but not being in NY for this anniversary we settled for the closest thing. Was it the same? No, but it tasted pretty good.

The price was $1.98 for two slices. We bought one box of plain and one chocolate cheesecake for and total of $3.96.

This would be reserved for our Saturday night at the movies at home (with popcorn of course). Sure it wouldn't have lasted like the card, but we were plenty satisfied with our choice.

Even though we liked the flowers, we weren't sure they were what we wanted and decided to skip them for that evening. (Not the ones in this photo, but pictured below.) Besides, it was dark out by now and all the floral shops and nurseries were closed. This would be something we could do later in the anniversary staycation.

Which flowers would you give for an anniversary?

Big Blooms - What do you think? Do they shout "anniversary" to you? 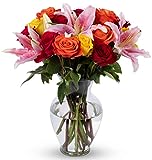 Would you like some ice cream? - A date night hangout.

Edging toward 9:30 p.m. my husband asked if I wanted to go to Dairy Queen for a strawberry sundae. I don't think we've been there in over a year, so I said if he wanted to go it would be alright with me. This particular ice cream parlor is out of town and a good date night place. When we pulled up to the parking lot we weren't surprised to find it was pretty full.

When the sales clerk was preparing our order she put this placemat on the tray. Now of course when I saw this picture my stomach and taste buds said "You want that". Thankfully, my will power won out and ordered this small strawberry sundae.

My Favorite from DQ.

It was after 10 o'clock when we left Dairy Queen. As we came up to the car I looked up at the sign and saw that it said, "Welcome race fans." Apparently there was a race going on at the track outside of town.

My husband isn't a race fan, but I am. I loved going to Atco racetrack in New Jersey as a teen and even got to spend time in the trenches ( the pit) with the racers back then. My hearing was bad for a few days after, but it didn't keep me from going back from time to time.

"Where is the race track?" I asked my husband.

It's quite a ways out of town.

The races are probably over.

I know, but I'd like to see the track all lit up at night.

Several miles down the road we saw the skylight up. It looked like lightning off in the distance. It had been raining so we didn't think any more of it. The flashes in the sky were on our left before, and now they are on our right. It is so dark on that road you can't tell anything, but apparently the road turns.

A Flash in the Night - Some sparks still left in the romance.

The closer we got to the track the more we saw lights flashing faster and faster. "I've never seen lightning flash that fast before", I said to my husband. "What do you think it is?"

As we approached our destination we saw fireworks over the track. One of my favorite things is fireworks! I love them. We had to watch them on you tube this year and only had a few sparklers to set off at home. This was definitely God giving us favor!

We turned into the dirt parking lot on the outside of the field and watched the rest of the display.

Firecracker 500 Fireworks - What a night!

It was a perfect ending for our anniversary date; my husband being able to sit in a car and escape the crowds with me getting a front row seat. Happy ... you bet.

So what do you think about our anniversary staycation? Although some of the things we went to do didn't pan out, some surprises came along that night and the date turned out to be great. As a matter of fact the entire weekend went great.

We still haven't gone on our picnic, but the summer is young and so are we. Maybe your plans aren't working out the way you hoped for your summer vacation. Don't be discouraged. The best part of the plan is spending time with the ones you love, everything else is a bonus.

Photo: P.S. We even got a free souvenir.