The Belomor Canal gave the Soviet Union a shipping canal from the White Sea to the Baltic, at a cost of at least 11,000 lives and the use of the forced labor of over 100,000 political prisoners. Even though the canal is narrow, shallow, and seasonal, and was always under-engineered, it is back in at least partial use, especially for the transport of oil. The contemporary pro-Soviet accounts of the building of the canal, and responses to those events, are also part of the story. Although the Soviets held out the labor camps as a means of "rehabilitation" this was, essentially, slavery

The book written by "the collective" 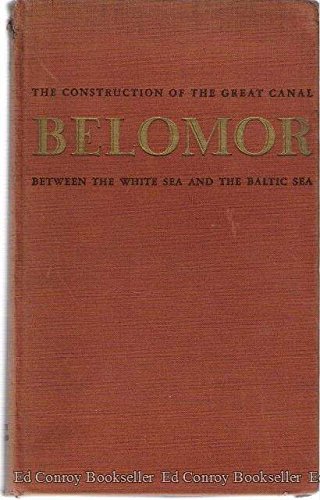 Belomor: An Account of the Construction of the New Canal Between the White Sea and the Baltic Sea [Russian Studies]
Buy Now

(Image is in the public domain)

Linking The White Sea And The Baltic Sea

Pubished under a GNU Free Documentation License. (See below)

This map shows the route of the White Sea-Baltic Sea Canal ("Belomorkanal") between the White Sea and Baltic Sea. It shows the lakes Vygozero, Onega, and Ladoga, and the Sivr and Neva rivers too.

"Agitprop propaganda poster used to motivate convict laborers during the construction. The writing on the poster says: 'Canal Army soldier! The heat of your work will melt your prison term!'"

Image is in the public domain

Making History for Stalin: The Story of the Belomor Canal

The Belomor Canal, exalted in the 1930s by the Stalinist press, came to symbolize what was morally deplorable in Stalinism. For the first time in English, Cynthia Ruder reconstructs the Canal project as a pivotal social, political, historical, and, most important, literary event.

Built with forced labor, the Belomor project has been a forbidden topic for half a century. With access to recently opened archives and to interviews with Canal construction survivors themselves, Ruder examines the project and its attendant literary works--drama, poetry, novels, and the collectively written History of the Construction of the Stalin White Sea-Baltic Canal--to create an unusually broad understanding of Stalinist culture. She argues that the project was the first to institutionalize the philosophy of perekovka, the idea that a new people who personify the Soviet Union in action and deed could be created through forced labor and ideological reeducation.

As both a construction project and a literary event, Belomor was characterized by contradictions: enthusiasm versus revulsion, good will versus cynicism, self-destruction versus self-preservation, and scorn for the West versus a desperate hunger to impress it. Ruder shows that these juxtapositions capture the tension that infused many other events at the time, turning Belomor into a microcosm of life and literature in Soviet Russia.

Making History for Stalin: The Story of the Belomor Canal
"A unique, incisive, behind-the-scenes study of what is truly the paradigmatic text of Stalinism."-- Russian Review "This is a remarkable piece of work, a symbiosis of history and literature. . . . A generally excellent, and in some parts brilliant study. It is thoroughly researched and offers a hitherto unknown piece in English in the jigsaw puzzle of Soviet manipulation of history, this time through literature. . . . Should be of great interest to all specialists in Russian literature, history and political science." -- International Journal on World Peace "The history of forced labor in the Soviet Union, though greatly publicized, still invites scholarly investigation, both in terms of literary works, historical archives (some of which still remain closed to researchers), and biographical materials. Ruder's monograph is a competent examination of the most infamous of the early Soviet forced-labor projects, and we can only hope that its publication represents the beginning of a new, sustained inquiry into this period."-- Slavic and East European Journal "A fascinating work. . . . Given the growing interest in the Stalin period among historians and literary scholars, this work is truly cutting-edge."--Catharine T. Nepomnyaschy, Barnard College
Buy Now

Belomor: An Account of the Construction of the New Canal Between the White Sea and the Baltic Sea (Russian Studies) (English and Russian Edition)
Buy Now

Pubished under a GNU Free Documentation License, (See below)

"The total waterway length is 227 kilometres (141 mi), of which 48 kilometres (30 mi) are manmade. The current flows downwards from Lake Onega to the White Sea, and all navigation marks are set according to it....The canal begins near Povenets settlement in Povenets bay of Lake Onega. Right after Povenets there are seven locks close together, forming the "Stairs of Povenets". These locks are the southern slope of the canal. The canal summit pond is 22 kilometres (14 mi) long between the locks 7/8. The northern slope has twelve locks numbered 8–19. The route of the northern slope runs through five large lakes; Lake Matkozero between locks 8/9, Lake Vygozero between locks 9/10, Lake Palagorka between locks 10/11, Lake Voitskoye between locks 11/12, and Lake Matkozhnya between locks 13/14. The canal empties out into the Soroka Bay of the White Sea at Belomorsk. The settlements of Povenets, Segezha, Nadvoitsy, Sosnovets, and Belomorsk are located along the canal." Citation from Wikipedia article here.

From Belomorsk the route runs South from the White Sea to Lake Vegozero, by way of the Vyg River, entering the lake at Nadvoitsy

(Image is in public domain)

Halfway between Belomorsk and Medvazjegorsk, on the Western shore of Lake Vyg, is the city of Segheza. Built to serve a large paper. pulp and packaging factory, taking advantage of the canal and the railway. 50% of Segheza's production is directed to the cement industry.

Medvazjegorsk is at the northern point of Lake Onega

This file is licensed under a Creative Commons Attribution ShareAlike 2.0 License

The canal actually leaves the lake at Povonets, to the east of Medvezhyegorsk where there is a series of locks known as the Stairs of Povonets. (The flow of water is northwards.)

The settlement on the West of the lake is Petrozavodsk, capital of the Republic of Karelia. Lake Onega is connected to Lake Lagoda by the Svyr River, which you can see running Westwards from the lake towards the bottom left of this image.

Petrozavodsk is also the headquarters of companies that navigate the canal and the lakes today, including The White Sea and Onega Shipping Company.

(Image is in the public domain)

The Svyr Riverr enters the lake on the lower right. The passage from the lake to St. Petersburg via the Neva River (exits lake lower left) is part of the already existing Volga-Baltic Waterway.

The official route of the Belomor Canal from the White Sea to the entrance to Lake Lagoda is 227km, of which only 48km are artificial. This seems to makes the loss of life involved in building the canal even more appalling.