Efficient Admin (aka Michelle) loves good hikes and good food. She currently works as a Project Coordinator for an engineering company.

Main Entrance to the Billy Graham Library in Charlotte, NC

Location of The Billy Graham Library 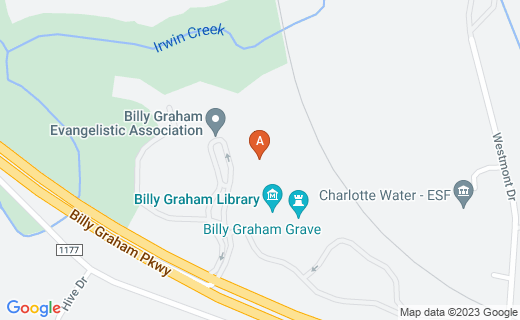 Write for Hubpages and earn money! Signup is free.

The Billy Graham Library consists of 15 exhibits, a deli shop, a gift store, a talking cow, a prayer room, and the house he grew up in which is open for touring. Once you go through the front door you will see Bessie, the famous talking cow, on your right (see video footage of Bessie below). Groups of approximately 20 people are moved through the library at a time. First your group will start with Bessie and then move to the next gallery which features a video. Many of the galleries have video footage of the life and preaching of Billy Graham and there is limited seating in each exhibit (that is probably why they allow groups of 20 people at a time). At the end of the exhibits, everyone gets a Decision Card to fill out and at the end of the tour, no pressure, there are counselors you can talk and pray with if you wish.

Parking is $10 per car. Admission is free but donations are welcomed and boxes are located in the lobby. During the Christmas Holiday horse-drawn carriage rides are available (see video footage of the carriage rides below), and a live nativity scene is on the premises to view.

The bookstore and dairy bar accept cash, checks, and all major credit cards. Smoking, alcoholic beverages, outside food and drink, and pets are not permitted on the property. Cameras are permitted in the exhibit areas, but please refrain from flash photography. The Billy Graham Evangelistic Association Headquarters is located behind the library and a shuttle bus is available to take you there. This is the building where the administrative offices are located, and there is a large beautiful dining room located here as well. My group had a buffet Christmas dinner there and it was just fantastic food consisting of turkey and gravy, ham and gravy, stuffing, salad, green bean casserole, sweet potato casserole, brown rice pilaf, mashed potatoes and gravy. For dessert they served pecan cheesecake pie, peppermint chocolate pie, and 2 other desserts.

Layout of the Library and the Exhibits

The deli serves a selection of sandwiches, Ruth Graham’s chicken salad recipe, the Billy Frank hot dog, BBQ, fresh salads, soups, soft drinks, ice cream cones, and cookies. There is plenty of seating available if you want to stay there and have a sit down meal.

During the Christmas holiday season when my group attended, the gift store was still packed at 9:00 p.m. with tourists. Named after Ruth Graham, Billy’s wife, this bookstore has a great selection of bibles, books by the Graham family, classic Billy Graham sermons on DVD plus a wide variety of gifts such as music, apparel, and specialty items. Billy Graham’s personal book collection lines the walls of this bookstore. Just look up toward the ceiling and you will see all the books behind the glass. Also on display is his personal desk and chair he used throughout the years. There was a big crowd in the house when I toured but fortunately I was able to get a few photos on this visit. When Billy Graham was 9 years old, his family moved into this brick colonial house which his father built in 1927. Billy lived in this house from age 9 until he went off to college. Prior to the move Billy and his family lived in a clapboard house which did not have indoor plumbing. Both houses were located on their Park Road dairy farm four miles southeast of what is now The Billy Graham Library. The farm was 300 acres and featured more than 70 cows. This new house had indoor plumbing and they no longer had to bath in a washtub on the back porch. Billy’s parents stayed in this house until they passed.

When it sold in 1984, the house was relocated to Jim Baker’s now infamous Heritage USA property in Fort Mill, SC, where it was open as a tourist attraction until 1997. Nine years later it was moved again to its current site at The Billy Graham Library. Many of the original building materials were used in the restoration process, such as all the first-story wood flooring and several thousand bricks. Billy’s mother lived in the house until 1981 when she passed away. The home is currently furnished in a similar style Mother Graham enjoyed when she lived there.

The home is approximately 2,400 square feet and cost $9,000 to build. Originally the home had 4 bedrooms and one bath on the second floor. Some of the original furnishings still exist in the house. You will see many of the actual family photos taken through the years throughout the floor plan. Original artifacts in the house are as follows:

Walk down the brick walkway, which is in the shape of a cross, and you will come to this tranquil place which lies at the edge of the woods. Ruth Graham was buried here when she passed in 2007. George Beverly Shea and Cliff Barrows, who were original Crusade Team members, have asked that they be buried next to their wives in an area just a short stroll away.

This was quite interesting. There was a real live camel, a donkey, a tiny little deer-like creature, two small oxen-like furry creatures, and a billy goat which stood well behaved next the the human wise men on the stage. I believe these animals were probably sedated because they were so well-behaved the whole time. True story: we thought maybe the donkey was a stuffed animal because it stood there so still and quiet, until it stepped forward and lifted it's tail to take a poopy. Yes, that is when we realized it was a real animal. I was able to pet one of the furry oxen like animals because it laid down next to the fence that contained the nativity scene. There was also hand sanitizer provided at the fence for anyone who was so inclined.

In the video below entitled "Horse Drawn Carriage Rides" you can see in the background the homestead and also the trees decorated with Christmas lights. The horses had poopy bags attached behind them -- smart move so nobody has to clean that up!