Sharon is a Human Resources Specialist who enjoys researching food related topics and sharing what she learns.

We have the ability to grow and cultivate anything we wish so wild fruit is not commonly found anymore. However there are exceptions and the wild blueberry is one of them. It grows naturally and abundantly in Oxford, Nova Scotia, Canada.

The blueberry is a versatile little berry, it's great to eat on its own or as a nice addition to oatmeal, fruit salads, or yogurt. You can make blueberry pies, cakes and jams too. Not only is the blueberry a delicious addition to many dishes; it is also a superfood that is full of nutrition.

Oxford is a tiny little town that is home to the gigantic blueberry man pictured below. This giant blueberry welcomes everyone to Oxford. He is the "King" of the local business that provides the world with frozen wild blueberries.

I have been to this little town only because my Uncle once lived there and was a local business owner. He always told me "if you get ever get tired of life in the big city, come on down to Oxford, you can always get a job in the blueberry plant"

Well, I never took him up on his offer and he has since retired and moved to another town. However, Oxford is still chugging along as the largest wild blueberry producer in Canada and now in the world. There is no end in sight for this very prosperous industry in this equally prosperous town.

I know that generally speaking, people's image of Canada is the land of ice and snow but that stereotypical opinion is just not so. The southern parts of Canada have climates that support fruit production and consequently produces an abundance of different fruits when in the growing season.

So if you ever find yourself visiting this country and in particular, Nova Scotia, visit the blueberry capital of Canada; that little town named Oxford.

Where is Oxford, Nova Scotia? - The Blueberry Capital of Canada

Oxford is a tiny little town with a population of just 1,138. It is so small that it is not even named on the map. There isn't even a small dot to identify it. The approximate location of Oxford is just southeast of the town of Amherst. This is a larger town of just over 9,000 therefore it earns a "dot" on the map! 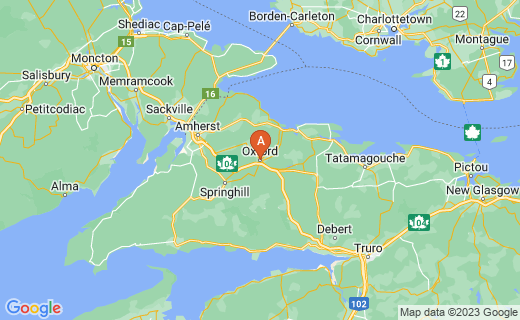 The History of Oxford Nova Scotia

The hamlet of Oxford has a very long history as it was founded in 1791 and came to have its name because it was at the junction of three rivers and the early settlers would use oxen to cross these rivers. The word "ford" meant "the act of crossing a river" hence the two words were put together and the area became known as "Oxford".

This town has not grown substantially in population but it has made a name for itself in the frozen food industry by shipping wild blueberries worldwide.

The blueberry processing plant is the largest employer in this small town and it processes an astounding three million pounds of wild blueberries during the peak growing season.

Before Oxford ventured into the wild blueberry business the town enjoyed a strong manufacturing industry that included a foundry and a wool mill. It has always been a prosperous place to live and work.

Oxford, to this day, is expanding its frozen food business and I have recently ads on television for the first time this year. The brand is expanding and has become well known.

The blueberries in Oxford, Nova Scotia are wild and are not cultivated (farmed by humans). Blueberries are actually a berry that is native to North America and they were a nutritional staple of the Indigenous people here.

What is the difference between blueberries growing in the wild and blueberries that we grow? The cultivated berries are larger and juicier and that's a plus when it comes to taste however they are not as packed full of antioxidants as the wild blueberry.

The wild blueberry is a super food that is in it's natural state growing without the help of people. This is the ultimate "organic" food.

Adding blueberries to your diet has many health benefits and the nutritional value of the blueberry rivals many of our other healthy fruits and vegetables. For example, you would need to eat five servings of broccoli (another super food) to equal the antioxidant level of one serving of blueberries. That is a very significant difference not too mention the blueberry is sweet and more appealing in taste.

Did you know that this tiny hamlet in Nova Scotia is the world's largest provider of wild blueberries? Yes, its true this sleepy little hamlet is the home of Oxford Frozen Foods founded in 1968.

This company supplies the world with wild blueberries. The climatic conditions in this region of Nova Scotia provides the perfect growing conditions for the wild blueberry so they flourish here without the need for human intervention.

Where do Blueberries Grow?

These berries are native to North America. The species growing wild in the northeast region of North America is known as the lowbush blueberry. They are a very hardy plant, known to be resistant to forest fires. Low lying and deciduous this plant is very prolific and being wild, it is managed by farmers rather than actually being cultivated.

Blueberries on the bush start off very pale as you can see from the photo above and as they ripen become the dark blue shade they are known for - hence the name!

Learn More about Wild Blueberries and Recipes too

Here is A Vacationer's Visit to Oxford, Nova Scotia

Did you Enjoy Your Visit to the Blueberry Capital?