After living in Paris for 3 years, my love of France developed into a passion. My holiday home there allows me to explore the whole country.

A Cathedral City in the Centre of France

Years ago, when I was living in Paris, my parents came to visit me. I took them to the ancient cathedral city of Chartres because my father loved ancient places. It was a very happy day and I promised myself that one day I would take my father to see Rheims, the city twinned with Canterbury in England, which was near my parent's home.

Sadly that day never arrived because the visit to Chartres turned out to be the last time my father was able to leave home. Now I find myself very near Bourges, another medieval city, another UNESCO World Heritage Site with a superb cathedral. My father would have loved wandering around the medieval centre and the Palace of Jacques Coeur, but most of all the cathedral itself.

All the photos here were taken by me.

The Cathedral and the Medieval City of Bourges

The city of Bourges has its roots a long way back in pre-Roman times when the area was the capital of a tribe called the Bituriges. The name Bourges may be derived from the name of these first inhabitants. Then Julius Caesar came along and destroyed their city with only about 800 people out of a population of 40,000 surviving. The city was rebuilt as a Roman city but later came under attack from various directions. A city wall was built around it during the 12th century - traces are still visible.

During the 14th century it became the capital of the Duchy of Berry. The Berry was an ancient province which is no longer recognised officially but still very much recognised by the people who live in it, the Berrichons. From 1360 to 1461 was considered to be the Great Age for Bourges.

The old city you can see nowadays reflects that age with the half-timbered houses and many fine buildings including Jacques Coeur's palace, the Hotel des Echevins, now the Estève Museum.

The Cathedral and its History

The site of the cathedral has been a place of worship since Roman times. The first cathedral was built during the 11th century in the Romanesque or Norman style but only a century later it was considered too small and the "new" building was started, this time in the Gothic style.

It took over a century to complete the building but it has largely survived until the present day. It is unusual in shape because it has no transepts: it doesn't have the more normal cross shape of a church.

The south tower is known as the "deaf tower" (tour sourde) because it has never had bells as a result of cracks that appeared in the 14th century. The northern tower also had problems and had to be rebuilt. It is called the "butter tower" (tour beurre) because anyone who made a donation towards the rebuilding was spared from Lent fasting and could, presumably, eat butter.

The Cathedral and its Stained Glass

The stained glass windows date mainly from the early 13th century and are comparable to those in Chartres Cathedral. Almost all of them have remained intact which is very unusual. This is mainly because Bourges is not close to any large cities so it escaped the attentions of the Protestants, the Revolutionaries, and also from any destruction during either of the World Wars.

As with most stained glass windows of those times, the panels illustrate scenes and teachings from the bible,

Inside and outside the cathedral of Bourges Walking Around the Town

There is far more to Bourges than only the cathedral. As soon as a site is added to UNESCO's World Heritage List, people seem to home in on it and forget about its surroundings. Bourges can offer so much more, including the Palais Jacques Coeur, several truly beautiful hôtels particuliers (grand townhouses), the medieval quarter with half timbered houses, narrow alleys, not to mention some interesting art deco buildings.

We first visited on the first day of April because that is when a little tourist train starts running for the season. I am all in favour of these trains because they give you a great overview of the place you are visiting. If at all possible, it's the first thing I do when I arrive. Palais Jacques Coeur - The Magnificent House of a Rich Merchant

Jacques Coeur was born in about 1400, the son of a rich merchant. He married the daughter of an influential citizen of Bourges and ultimately became Master of the Mint and adviser to the king.

He built this house against the old Gallo-Roman wall of the city with no expense spared - intended to reflect his social standing. He insisted that it should be "big, wide, tall and magnificent". The side facing the street is richly carved while behind it there is an inner courtyard, equally ornate. The curved shape of the building was dictated by the existing city wall.

Unfortunately in 1820 it was converted into a courthouse causing extensive damage. Later it underwent several restorations until it was bought by the state in 1923. The restoration is still in progress.

The Palais Jacques Coeur merits an article all of its own. I have the photos from a second visit and all I need now is the time to write it up.

Where is Bourges? - Almost at the Geographical Centre of France

There are seven villages just to the south of Bourges, all of which claim to be the centre of France, all based on slightly different calculations, so they could all be justified in their claims. 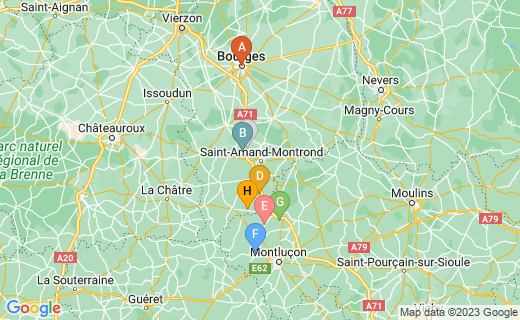 I love this video because it brings back many happy memories. It has no commentary so there is no requirement to understand French. It gives you an impression of not only the ancient buildings but also the vibrant modern city.

If you find yourself anywhere near Bourges, I urge you to visit. There is something there for everyone's taste.

Do you share our fascination with cathedrals and history?