A Bridge over the Atlantic

The Isle of Seil

Imagine crossing a bridge over the Altantic and visiting an island that can claim to have 'roofed' the world. Think it far fetched? Then travel to the north west coast of Scotland to discover a real hidden gem; the Isle of Seil, the most northerly of the Slate islands.

Ten miles south of Oban the island is separated from the mainland, but first, to reach it, you have to cross the Atlantic!, 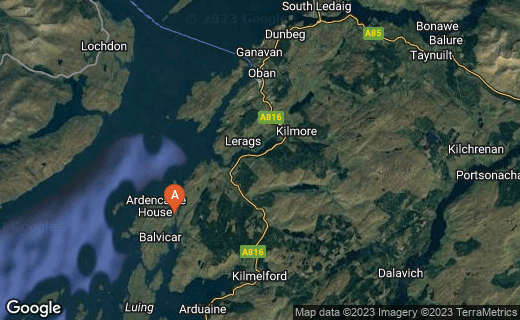 The Bridge over the Atlantic

Seil is separated from the mainland by a narrow stretch of water, the Clachan Sound and spanning the Sound stands the bridge.

Designed by Thomas Telford and built in 1792 of stone the bridge is steeply hump-backed with a single span arch 72 feet wide. This, the Clachan Bridge, is more romantically known as the 'Bridge over the Atlantic'.

And once over the bridge lies the tiny hamlet of Innish and the famed Tigh an Truish Inn or 'house of the trousers'. This attractive inn became so called after the 1745 Jacobite Risings when the wearing of the kilt in Scotland was banned; and was this inn is where islanders journeying to the mainland would change from their kilts into trousers.

Tigh an Truish - The House of Trousers

Next to the bridge nestle a small cluster of small houses including an eighteenth century inn, the Tigh an Truish or House of Trousers. This curious name dates back to the days of the Jacobite rebellion, the 1745 uprising and the ill-fated attempt by Charles Stuart, Bonnie Prince Charlie, to regain the English throne. In the ensuing aftermath repressive measures were introduced with the Disarming Act. The bagpipes were branded an instrument of war and banned. Wearing of the tartan and traditional kilt were forbidden too, under imposed penalties of fines or even transportation to the colonies.

On the Isle of Seil, perhaps in part due to its remoteness in the days before the Clachan Bridge was built, many islanders are reputed to have continued wearing the kilt. However, when journeying to the mainland and on reaching the inn at the crossing point they are said to have swapped their apparel changing into trousers. On the return journey when setting foot on the island the islanders once more donned the kilt at the inn at the Tigh an Truish, the 'House of Trousers' to cock a snoop at their political masters.

The inn survives to this day and offers a warm welcome to kilt and trouser wearers alike!

Towards Ellenabeich and the Isle of Easdale

Travel down the eastern side of the island for several miles and you reach the village of Balvicar dotted with white washed quarriers cottages set beside Balvicar Bay. These cottages provide the first clue to the Islands recent past.

For over three centuries Seil along with the neighbouring islands of Easdale, Luing, Lunga, Shuna, Torsa and Belnahua was at the centre of the Scottish slate industry. From these islands slate was quarried, cut and exported all round the globe giving rise to the name 'the islands that roofed the world'.

Head west from Balvicar and the character of the island changes and becomes more rugged and rocky; with fewer signs of cultivation and habitation until you reach the village of Ellenabeich. This is the largest village and main settlement on the island with rows of low single storey white washed slate workers cottages along the main street. The village has been used for various television and film locations including Parahandy, Ring of Bright Water and Sea of Souls. A heritage centre has been opened in one of the cottages depicting island life and the slate industry and well worth a visit. The neighbouring island of Easdale, reached from the harbour by a boat journey taking 5 minutes is the home of a folk museum run by the Scottish Slate Islands Heritage Trust.

Follow the road from Ellenabeich back to Balvicar and take the road to the southern tip of the island to reach Cuan, where a small ferry terminus links the Isle of Seil with the Isle of Luing.

Discover for yourself this hidden gem and visit the small and beautiful Isle of Seil on the west coast of Scotland. You will not be disappointed.

The Bridge Over The Atlantic - It is, really! Click to enlarge and see more

Nope. Not Done Yet - Further introduction to the Isle Of Seil