Lisa is an artist who has been trapped in Texas for over a decade. She enjoys photographing weird and wonderful Texas landmarks.

Cadillac Ranch is an strange, ever-evolving art installation in Amarillo, Texas, on Historic Route 66. The installation, set back from the road in an otherwise empty field, is built from ten vintage Cadillac cars, buried nose down in the sand, with their back bumpers in the air. The site is a popular place for photos and creative spray painting by visitors, who are not discouraged by the owner from adding their contribution to the cars' colorful paint jobs.

Cadillac Ranch was first built in 1974, by three members of Ant Farm, a San Francisco art collective. Ten old, junk Cadillac cars manufactured between 1949 and 1963 were buried in the ground, nose down. The cars, arranged from east to west, oldest to newest, are supposedly placed at the same angle as the Great Pyramid in Egypt. As a work of art, it has become a sort of statement about materialism and spirituality, and is vaguely reminiscent of Stonehenge.

The project was originally funded by eccentric Amarillo billionaire Stanley Marsh, who owned the first piece of land where the installation was placed. The cars were all purchased from local junkyards for about $200 each. Those that were still running were driven to the site, directly into the holes dug for them, while others were transported and dropped in with heavy machinery.

When they were first installed, the cars were left with all their original pieces and paint jobs. As people began visiting the site, the windows were broken, and chrome pieces, accessories, and even some of the doors, were stolen. Visitors began scratching their names into the cars.

The cars were originally buried alongside Interstate 40, but were moved two miles west in 1997, to place them outside the Amarillo city limits, after a scuffle over the piece with the city council. This was also done, in part, because of rising property values in the area.

The installation now stands on private property formerly owned by Stanley Marsh, who was the original financier of the project. Marsh also owned the land where it was originally placed. The property was put into a family trust before Marsh's death in 2014, which allows the piece to remain on the land.

The cars now have wheels welded to their axles to prevent theft, and are periodically repainted all one color. In the 90s, they were often repainted bright pink, but they've also been painted white for a television commercial, and black in memory of the death of one of the original Ant Farm members. They've also occasionally been repainted to their original colors. However, none of these paint jobs ever lasts long, because the cars are continually spray painted with graffiti by visitors.

My Visit to Cadillac Ranch In 2010, on my way from Dallas to Santa Fe, a friend and I stopped and took a break from our long drive at Cadillac Ranch. We took some photos, and did a little spray painting. The gallery above shows some of the photos I took that day.

Although we din't bring any paint with us, my friend was able to leave some graffiti on several of the cars by using paint cans left behind by others. We saw several people picking up cans, left on the ground by previous visitors, shaking them, and using any that had paint remaining in them. If you visit, bring a can of paint to leave behind, or pick up a few empties to toss into the trash as you depart.

Cadillac Ranch has appeared in many films, television shows, and videos, and has been the inspiration for many creative projects.

Cadillac Ranch is located on the south side of Interstate 40 in Amarillo, Texas, between Hope Road and Arnot Road.

Although the installation is on private property, the public is allowed access through a metal gate during daylight hours. While there are signs posted outside the fence about the illegality of graffiti, the cars are mercilessly spray painted by visitors in vivid colors, and there are usually half empty cans of spray paint scattered on the ground around the cars. 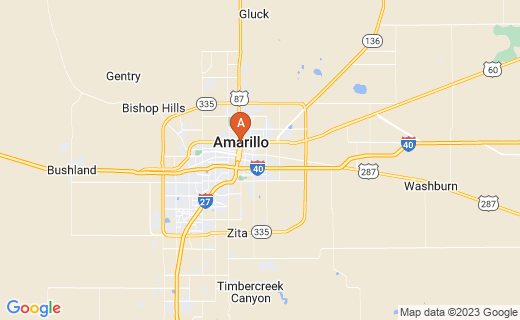 These sites offer more information about the history of Cadillac Ranch.

If you've been to the Cadillac Ranch in Amarillo, tell us about it!

Have You Been There?