Tennessee is very rich in Civil War era history and among the artifacts to remind us of this are the state's numerous homes; homes who bore witness to the bloodiest war on American soil: the Civil War.

Tennessee, much like the rest of the country, lost many of these precious dwellings during the long-ago war but quite a few remain standing. The following is a short list of the state's surviving plantation homes available for tours in Tennessee.

In 1821, wealthy Irish immigrant William Dickson gathered a team comprised of highly skilled Irish artisans and slaves to build a mansion for his only child Catherine and her husband.

Dr. & Mrs. Alexander Williams took possession of the finished home in 1823 and thus began their life of lavish entertaining. Among guests to their many parties were three presidents, the Marquis de Lafayette, and David Crockett.

The Williams' mansion was commandeered by both Union and Confederate soldiers during the Civil War. Confederate General John Hunt Morgan made the unfortunate mistake of staying in the home once and was ambushed and killed by Union troops. It was said they had been tipped off by the Williams' daughter-in-law, Lucy. Catherine Williams was so devastated by the General's death, she left her once-beloved home shortly after the war ended and never returned.

Where the Holston and French Broad Rivers meet sits the Ramsey House built in 1797 by English architect Thomas Hope for Colonel Francis Alexander Ramsey. Ramsey had acquired the land for his plantation, which he called Swan Pond, via a land grant in November 1786.

Many generations of Ramseys would live in the home until the outbreak of the Civil War. When Union troops destroyed another Ramsey family mansion nearby, remaining family members fled to South Carolina never to return to Knoxville.

Sam Davis was born and raised in Rutherford County, in the town of Smyrna, and was the son of a cotton farmer until he volunteered to join the Confederate army.

Davis became a scout for the southern troops, going behind enemy lines to gather information from Union soldiers and disrupt their lines of communication. In November 1863, Davis was caught by Union leaders and hanged for his crimes.

Today the Same Davis plantation home in Smyrna continues to grow cotton, just as Sam Davis and his father did in the days before the Civil War forever changed America.

4. The Hermitage of Nashville

The home and final resting place for America's seventh President Andrew Jackson is on a 1,000 acre plantation just two miles south of Nashville.

A year after he opened the first general store in Gallatin in 1803, Jackson acquired the estate known as The Hermitage. The farm's primary crop was cotton. While managing his plantation, practicing law, and working the general store, Jackson pursued his political aspirations, fully supported by his wife, Rachel. Sadly, she would die unexpectedly only three weeks after her husband's victory in the 1828 Presidential election. Deeply grieved over his wife's death, Jackson fully enmeshed himself in American politics and only occasionally visited his home for the next several years.

The former President returned to The Hermitage after his retirement in 1837. He lived out his remaining days at his beloved home place until his death in 1845. He is buried next to Rachel and two of their children on the plantation grounds.

Hermitage tours given daily 9 AM to 3 PM

When Adelicia Hayes Franklin married Joseph Alexander Smith Ackle in 1849, they immediately commissioned the construction of an Italian Villa-style summer home in Nashville.

Adelicia was the daughter of one of Louisiana's largest cotton croppers and the Bel Monte (which has evolved into the modern day spelling of Belmont) was to be a summer get-away from the humid Louisiana summers. The home included several bedrooms, a bowling alley, and an art gallery. The grounds included a beautiful conservatory and even a zoo complete with exotic animals.

Months before her passing in 1887, Adelicia sold Bel Monte for the sum of $54,000. In 1890, it opened as a women's academy and junior college. The school merged with Ward's Seminary in 1913 and was renamed Ward-Belmont. That name changed again in 1951 when the Tennessee Baptist Convention purchased the school and created a four-year, co-educational college. In 2007, Belmont University separated from the Tennessee Baptist Convention. Today the home is owned by the Belmont Mansion Association and Belmont University while it is operated and preserved by the Belmont Mansion Association.

Commissioned by Virginian John Harding for construction in 1806, Belle Meade (French for "beautiful meadow") became the premier thoroughbred breading, training, and racing plantation in America until 1875.

In later years, Confederate General William Hicks Jackson married Harding's eldest daughter. In 1883, Jackson updated the home to include indoor plumbing for three bathrooms. The extricate details of the home are indicative of the styles of the era of home's built for the elite and designed with entertaining in mind.

The Rippavills Plantation almost never came to be. In 1841, Nathaniel Frances Cheairs IV told his father he wished to marry a young lady named Susan Peters McKissack. His father was livid - for no other reason than the woman's name!

The father insisted his son find someone else to marry and carry on the tradition of the Nathaniel's before him by marrying a woman named Sarah. Nathaniel IV however, was adamant he would marry Susan. Nothing would change the young man's mind, not even a large sum of money he was offered. Nonetheless, Nathaniel desperately wished for his father's approval.

Attempting to sway Nathaniel III, Susan's father, who owned a successful brickyard, offered to provide all of the bricks and free slave labor to build the couple a home upon their marriage. Nathaniel III, a wise businessman, realized the value of this offer and gave the young couple his blessing.

Rippavilla Plantation was that couples home. It was on this grand estate, Nathaniel and Susan Cheairs IV spent the remaining days of their lives.

8. Rattle and Snap in Columbia

On a hilltop alongside Highway 243, seven miles outside the city of Columbia sits one of the best examples of Greek Revival residential architecture in the country; especially having been built in pre-Civil War days. It's not the design, however, that is most memorable about this plantation but the history.

When William Polk won possession of more than 5,000 acres in rural Maury County in a game of chance known as Rattle and Snap from the presiding North Carolina Governor at that time, it seemed only fitting to name the plantation after his source of good fortune.

Rattle & Snap tours are available by appointment only

Part of the Pink Palace group of homes now owned and operated by the city of Memphis, the Mallory-Neely House was built in 1852. From 1852 until 1969, the mansion was home to the families of Isaac Kirtland, Benjamin Babb, James C. Neely, Daniel Grant, and Barton Lee Mallory. In 1969, the last resident of the mansion, Daisy Neely-Mallory, died at age 98. Her will gifted the house to the Daughters, Sons, and Children of the American Revolution.

Grab your favorite history buff, your snack bag and cooler, and hit the open road to check out some the fabulous plantation home tours and many other interesting attractions scattered about our great state. Use the interactive map below to plan your road trip. 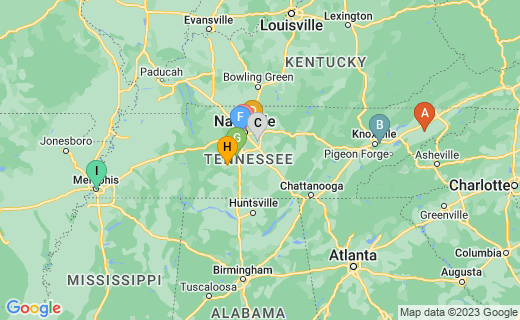