Mary and her husband work on international projects and have worked in the Maldives helping the government with skills development.

Armed with a car and a map and a few Euros, the husband and myself found ourselves in the place where they make the best armagnac, Condom-en-Armagnac.

I have to admit that it was armagnac that drew us to this place. With five days to roam around between grandparenting assignments, we chose the less obvious destinations where no one had written a template book titled "A Year in...".

The Southwest of France appeared to be a great unexplored black hole that didn't qualify as "the South of France" and was not Paris. Digging a bit, part of southwest France turned out to be Armagnac country, the husband's favourite after dinner noggin. And amidst the giggly laugh of the granddaughter when she saw that the best Armagnac came from Condom, we drove off through Lyon to explore a brand new territory.

Driving from Lausanne, it took us almost two days on mainly country roads to reach Condom-en-Armagnac. With no real plan or reservations we could poke around and drive up side roads that promised Castles and Chateau and medieval this that and the other. We doddled a fair bit, discovering the Roman Village of Perouges, lunching in Lyon, falling over Roquefort and condemning the car to an endless future of cheese overture, and an overnight in Le Puy.

The Drive to Condom, Gascony - Truly Enjoyable in the Spring

An Early Spring Drive to the Gascony Region

The drive itself was truly enjoyable. No tourists yet in early Spring, zero traffic, endless testable boulangerie with meltable croissants. By the end of the second day, we staggered into Condom-en-Armagnac, having become stretched skins over slow digesting sausage, baguettes, a myriad of farm cheeses, a sampling of local wines and the remnant of swiss chocolate.

With our usual luck, we stopped right in front of the Hotel Trois Lys parking entrance. So, off we went to get ourselves a room in the hotel, a very European newly renovated 300 year old house right in the center of town.

Our arrival seemed to mark the official opening of tourist season for the owner/proprietor and our welcome swizzle was a massive Armagnac as a fortifying digestife. We stumbled out of the front gate to get some food loosening exercise while kicking the town's tires.

A Visit to Condom-en-Armagnac - The Center of Gascony

Where about is Condom-en-Armagnac? - Get to know how to get there 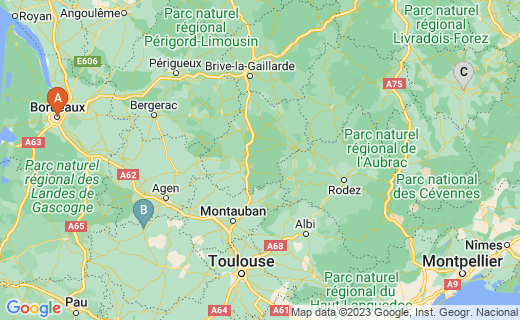 The town is the capital of Gascony and an easy place to set up camp for exploring the region and taste its famous Armagnac and foie gras, the massively politically incorrect Pate de Foie Gras. Every little farm seems to be hammering out this stuff and the brandy afficionadoes are on the loose tracking armagnac down. Our experience suggests that the Cognac like drink is produced because the local wine is, ahhhhh, best distilled!

It is also home to two castles built in the 13th century, Château de Mothes and the Château de Pouypardin.

The city's name has its origin from the Gaulish words condate-ó-magos which means "market of the confluence". Condatómagos evolved into Condatóm and then into Conddóm. Condom was first recorded in Latin in the 10th century as Condomus or Condomium.

Early on, Condom has already developed as a wine country. With the River Baise, it has been able to develop its commercial interest.

Condom was once under the crown of England brought about by the marriage of Eleanor of Aquitane to Henry, Duke of Normandy who later became Henry II. After the Hundred Years War, this place was returned to France.

Condom had once been a major resting place for pilgrims on the road to St. James of Compostela. To appreciate Condom's place in this Via Podiensis, take the walking tour following the Circuit d'Artagnan as this takes you to the sites connected to this pilgrimage route.

If your interest is the Cathedral, then take the Circuit de Bossuet which will take you not just to the Cathedral but also the Abbey and other older buildings.

The Cathedral of St. Pierre In Condom

Condom-en-Armagnac's late Gothic cathedral, St. Pierre, was once rescued by its citizens during the Wars of Religion in 1569 when the French Huguenots threatened to destroy it. The citizens happily raised the ransom of F30,000 francs which lets us enjoy this landmark today. In punishment, the Huguenots had to spend 4 centuries living with the Boers in South Africa being the icing between English and Dutch in that particular Oreo cookie.

The Cathedral was designed at the end of the 15th century and finished at around 1531 with the leadership of the bishop then, Jean Marre. It was famous for its sumptuous 16th century liturgy and its 1605 organ. You still can see its original pulpit with its delicately carved stone baldaquin.

The Three Musketeers of Gascony

The Gascons call their area the "Pays d'Artagnan". In the center of Condom on the verge of the St. Pierre Cathedral is the superhuman bronze statue of the Three Musketeers, the famous charactersl from Alexandre Dumas novel.

Apparently, the character of d'Artagnan was based on Charles de Batz, considered an ideal musketeer or royal bodyguard because of his chivalry and impetuousness. This seems to be interpreted as committing massive faux pas but apologizing so well that one is forgiven. A classic was exhibited in Batz' arrest of Louis XIV's most formidable minister and then stickhandled his way out of the mess.

But, of course, the highlight for us was the visit to one of the Armagnac producers. We just drove around the Condom environs and happily got lost in one of the beautiful chateaus where we boldly went where no tourist had gone before. This was because it was a private residence. De batz would have been proud!

The Mistress of the Chateau recognizing my husband as a well meaning doofus with theatrical French let us take a few pictures and directed us to a tiny award winning producer of Armagnac next door: the Chateau Le Courrejot.

The proprietress of the Chateau knows her Armagnac and her passion for the best produce is overwhelming that one really understands why this area is home to the finest brandy in the world (the husband made me say it) putting Cognacs to shame.

She told us that their Tenareze Armagnacs are distilled, aged and bottled right on the property. Through continuous distillation and a long aging process in their home made oak casks, four of their vintages got Gold medals at the Paris competitions.

Watch how Armagnac is made:

A Taste of Armagnac

A drink of armagnac? - A fine drink

Do you enjoy a drink of armagnac?

It is here in Condom France that you can taste the best Armagnac. You can watch the producers here make armagnac of which they're very proud of.

The River Baise skirts the town centre and was once a major transport highway for the residents and their exports to the Nordic countries and even America. One can still see the private docks and feeder canals that houses had on the river and may still be used today.

Located in the former stables of the Bishop of Milon, the Musee de l'Armagnac, with its presentation of the phases of armagnac production, gives you a much deeper understanding of what distinguishes the Armagnac from other fine brandies.

The Hotel de Cugnac with its ancient wine and spirit distillery and storehouse especially the 18-ton press and beautiful premises is a must see. But hitting the country roads and counting on your luck is much more fun.

We also visited the old residence of the Bishop of Condom. Fantastic. Massive kitchens, with 13th century spits and all the gunge needed to feed the resident cast of characters. Fabulous grounds and a basement video giving you everything you ever wanted to know about the area and armagnac. It has a well stocked store of the products of the area.

So, what's the take away? - There are lots from Condom-en-Armagnac and its environs

The Take Away from Gascony

Have your been to the Southwest of France?

When you were in the Southwest of France, did you visit Condom-en-Armagnac?

For more information on Condom, France:

1. Information on Condom and the Cathedral. Wikipedia

2. For more on tourism in Condom, France, see this guide.