We Crashed During a Three Week Vacation.

We crashed after the 1st day.

We rode from Indiana to Eastern Ohio the first day, then right when we arrived in the Washington D.C. area,

Entering a busy intersection, our direction of traffic was the only green light.

An oncoming car, not in a turn lane, took advantage of the pause between light changes, and made an illegal left hand turn just as we eased into the intersection, unaware.

We were two-up on a Honda Goldwing. (As in this picture)

I was thrown from the bike when we were t-boned.

My husband hung on to the bike, was spun around, thrown onto a car that had been in the lane next to us before the wreck, thrown over that car landing onto the hood of another behind the first one.

Laying in the street unable to move my legs for the severe pain, I heard sirens, the call for emergency help was almost immediate - or so it seemed. I guess I was knocked unconscious for a few minutes. I remember hearing ladies saying, "I'm a nurse, and another saying, I'm a nurse." Then I heard one say, "I'm nurse one, you're nurse two." From there they started managing the wreck site until EMT's arrived.

I could hear my husband asking about me, so I knew he was conscious. I could also hear a person crying, "What have I done, what have I done? I'm so sorry."

WE MET BY "ACCIDENT"

The 3 week vacation was our 30th wedding anniversary.

We had a very detailed trip planner from AAA, little did we know mileage would play such a role in our "vacation."

We had the accident 3 miles from that day's destination;

0.8 miles from the firehouse;

and 4.2 miles from the best trauma hospital in the US in 1997, according to a national news magazine.

That paper in my hand.

AAA helped us plan the entire trip. (This was before GPS, MapQuest, Google Maps, etc. were so common.) Our first stop was Washington D.C. area, The next stop was a homeless mission in New York City, at the invitation from pastor friend, then to Portland, Maine to catch an overnight cruise to Nova Scotia where we would spend our anniversary on the 24th.

We were scheduled to spend a few weekdays with my friend. In fact, I just happened to have her phone number (along with all our emergency phone numbers) in my hand because we were stopping at the next gas station to call her for more detailed directions.

(We were Pastors of a church in Indiana. In addition to family members, we had board members and staff who wanted a report from us as we traveled.)

I remember yelling to everyone, "I dropped my phone list. I need my phone list." Finally someone retrieved the piece of paper with 15 or so phone numbers written on it. Because I had that list, I was able to call my friend we were visiting, once I got to the hospital, and let her know we were involved in an accident. I gave her the hospital information.

(A few days later, I had to call the Portland, Main cruise and cancel the tickets to Nova Scotia. And because I had that list, I managed to keep in touch with family, church leadership, and call the New York pastor to cancel our visit to the shelter.)

Once our friend received my call from the emergency room, she called her pastor and told him her friends had just had an accident. The pastor from Arlington, Virginia came to our bedside, immediately.

He came and prayed with my husband before his emergency surgery, and introduced his assistant pastor to me. This was an amazing blessing, because she became my ride to and from the hotel and hospital, the ride for family members from the airport and my "anything I need" friend. We're very close still 14 years later.

After being transported to the hospital, by two separate ambulances, a third ambulance arrived and hauled the driver of the car This person was in shock. My husband and I didn't see each other again for 48 hours. We never knew what happened to the car driver. The bike was totaled. My husbands wallet disappeared in the confusion and never showed up, so I spent our "vacation" cancelling credit cards and replacing contents of his wallet.

Most of our injuries are healed 14 years later. Memories of that incident are sweetened by the treasure of friends who stepped up to help us through this horrific trial.

Now that we do a full-time motorcycle ministry, we are with the pastor who prayed with us in the emergency room a few times a year. He rides a motorcycle and wears the same ministry patch we wear. God certainly brought us together and we're grateful. We met by "accident."

Be aware, motorcycles are everywhere

How to Ride a Motorcycle: A Rider's Guide to Strategy, Safety and Skill Development
Buy Now

The location of our accident. - It seemed like a huge intersection at the time.

Driving East on US 50 through Fairfax Virginia headed to Washington DC for a few days of memorials and site seeing, we were t-boned, hit from about a 90 degree angle by a car running a red light. We were 2 up on a motorcycle. 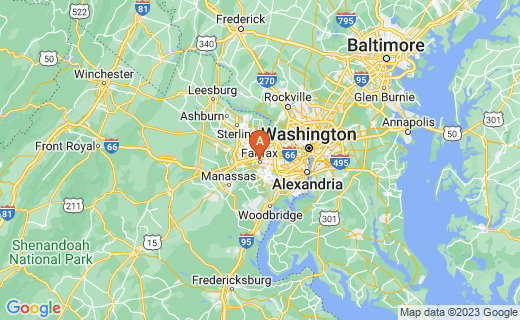 If you're going to have a wreck

We were both admitted to the hospital. I was on 48 hour observation, he was kept for 3 weeks. 1 in ICU, 1 in "Step-down" and 1 in what we all called a "real" room. I lived in the waiting room on each of these wards, as we were 650 miles from home.

I would have people come in and tell me I should go home and I'd have to re-train them, "I don't live here, I'm from Indiana."

Here is a list of the immediately treated injuries.

closed head injury (yes we had helmets on)

all ribs on left side,

cuts and bruises throughout

The long term results of the injuries I'll be talking about further down this article.

... on the street the EMTs were guessing I had a broken femur

Once I was rolled into the Emergency Room it was determined (via mobile xRay) that my hips were dislocated. Still waiting for a Doctor to see me, I signed off on my husband's blood transfusions and immediate surgery to remove his spleen, while they were taking care of him they added a tube to open a collapsed lung, and another to drain fluid from it.

A portable X-Ray revealed my hips were dislocated. After the hospital administered morphine, the EMTs who brought me in took action. One stood at my head and one at my ankles. On a signal I missed, they each pulled - one from under my arms and one had my very painful ankles, I remember flinching and asking them to stop just before the tug to place my hips back into place. The long term results of them being out of place any length of time is ligament and blood vessel damage. I've been told the two EMTs were heros to perform this right away.

My husband had emergency surgery to remove his spleen, and I was wheeled in to see him 48 hours later in ICU. He was in a drug induced coma. When he woke he still had the feeding tube, so he couldn't communicate, and he was horribly confused about where he was and why.

He had no recollection of the wreck.

We both have lingering symptoms 14 years later, but are so grateful for our healing and the progress we've made with some of the best care-giving out there and some amazing prayer warriors keeping us lifted up in prayer.

Ever had a "life changing" incident like a wreck?