Does your town have haunted places?

Well I guess I am lucky because mine does. Enid, Oklahoma, has several of them as a matter of fact. There are tales that go along with all these places and whether you believe it or not, is up to you. Don't read these and then go to bed alone on a dark stormy night. You might want to wait till morning when the sun is out and you know for sure what (or who) just knocked the broom over in the kitchen.

Ghostlahoma
Oklahoma, Where the Wind Comes Sweeping Down the Plain - and Ghosts of the Past Still Linger! With over 100 years under its belt, Oklahoma has not only a very colorful, but also a very haunted history. Ghostlahoma is the first book on the market that is solely dedicated to Oklahoma ghost stories and it will take you from the very first published ghost story in Oklahoma to specters of the present day, chilling you with tales of phantom hitch hikers and warming you with stories of "visiting" loved ones. Everyone has a ghost story -- even people that "don't believe in that stuff"-- and the stories that comprise Ghostlahoma were submitted by, and in many instances told by, the people that experienced them. So, we invite you to join us as we travel through the haunted history of Ghostlahoma in a way that has never been done before!
Buy Now

The city gets involved during the Spooky season

Costumed re-enactors appeared from behind the tombstones, portraying real, interesting people who once lived in the Enid area.

Haunted-Waverly Historic Ghost Tour "The Haunted Tours of Waverley". Times are 7 pm, 8 pm and 9 pm. The tour, is a walking tour and includes touring old historic residences, ghoulish refreshments after the tour and fun for all. Tickets are $10 per adult, $5 for children age 10 and younger. Each tour will only accommodate about 20 people so advance reservations. Any unsold tickets will be available at 6:30 pm the night of the tour. Wear comfortable walking shoes, bring a flashlight and be prepared to scream!

Ghosts and Legends of Oklahoma
Explore the paranormal history of Oklahoma through its colorful ghost stories and legends, as well as through the eyes of a renowned paranormal team. Have drinks with outlaw ghosts in an old saloon and tip your hat to the lady spirits upstairs in the bordello. Discover why several professional basketball players fear a hotel in downtown Oklahoma City. Learn about an alternate ending to the life of Abraham Lincoln's assassin, John Wilkes Booth. Follow the atlas and investigate the famous Stone Lion Inn, the 101 Ranch, Overholser Mansion, and other historic haunted locales throughout the state. This spine-tingling cross-section of Oklahoma's history includes dozens of tales of Native Americans, the Civil War, famous outlaws, Wild West shows, oil boomtowns, railroad legends, deadly tornados, and historic Route 66. Haunted Oklahoma awaits you!
Buy Now

The Tale of Imo Cemetery

If its dark outside and perhaps lots of dark clouds, the wind is whipping around and perhaps there is a streak of lightening or two. Now you must go west of Enid to Imo Rd, then turn left and go south to Wheat Capital road. Then turn west for 2 miles or if you can see it, the first road after the railroad track then turn south. Now look and if you can and there should be the cemetery gates on the right.

Look hard and you should see a glowing headstone in the cemetery. But if you have the nerve to get out of the car and you walk up to the head stone it will stop glowing. If you go south of the head stone there are claw marks on another head stone.

In the back of the cemetery there is an old Indian burial ground and they say you can hear voices and even feel people touching you. The Imo story about the graves has supposedly been investigated and could be tower lights across the street from the cemetery that give a reflection off the marker, the burning effect takes place as soon as it gets dark and goes away as soon as it gets light, when you walk up to it - at any point you can clearly see the lights in the background, from the ground point of view, it does in fact look like it is on fire, especially from the road at night but is really only an illusion.

Is it an illusion? I'll meet you out there tonight and we can check it out. Will you be there?

Does the spirit of Booth haunt the old hotel rooms?

The legend says that John Wilkes Booth, the assassin of President Abraham Lincoln, died in Enid around 1903. A man named David E. George, committed suicide in Enid, Oklahoma Territory, in 1903 and is believed to have been Booth himself.

John Wilkes Booth was a noted actor and Confederate sympathizer and had originally planned on kidnapping Lincoln in exchange for Confederate prisoners. Due to a change in plans Booth decided to assassinate President Lincoln on April 14, 1865, at the Ford's Theater in Washington. After shooting the President, Booth jumped to the stage, caught and broke his leg on a flag and fled the theater.

History states that Booth escaped, but was found by federal soldiers several weeks later. He had hidden in a barn near Port Royal, Virginia, and would not surrender. The barn was eventually set on fire. Booth was supposedly shot and killed by Sgt. Boston Corbett of the Sixteenth New York Cavalry.

Many years later on January 13, 1903, in the Booth Legend (upstairs in the current Garfield Furniture building above) in Enid, Oklahoma, a man calling himself David E George was found dead. A doctor diagnosed his death as self-administered arsenic poisoning. George had been a house painter who did not know how to paint and always had access to money but died penniless. Legend has him quoted as saying, "I killed the best man that ever lived."

Ghost Towns of Oklahoma
In the past 150 years as many as two thousand Oklahoma hamlets, villages, towns, and even cities have bloomed and then died. Some have faded away, with not even a fallen chimney to mark their location. Others have left ghostly marks of their past--mounds of rubble grown over with grass or crumbling walls of buildings. A few still cling tenaciously to life, with a few inhibitants left to call them home. In these pages John W. Morris tells about 130 of the towns. He describes how and why each was established, the activities of its people in its heyday, and the conditions that cuased it to fade away. Of course, to tell about the towns is also to tell about the people who built them and lived in them--and once had high hopes for their success.
Buy Now

New settlers had to bury their deceased but Enid didn't have an official cemetery. After the first person was buried it didn't take long before another was put nearby and thus the precedent to use the area as a cemetery was established. As best as anyone can figure or find, there were more than 200 people buried in this early day cemetery. Eventually many, but not all of them, were moved to the present day cemeteries.

Years later when the area of the old unofficial cemetery was developed as a housing addition, construction workers reported striking old caskets while excavating for foundations for new homes. Some of the settlers families were unable to afford the cost of moving their relatives to the new cemetery, leaving several graves in the original area as the large homes were being built.

Where was this early day cemetery? It was near the corner of South VanBuren and Wabash streets, in what is now known as the Kisner Addition! SO, if you live in the area and you think you've heard ghosts in the attic . . . you just might be right. 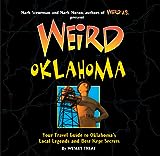 Weird Oklahoma: Your Travel Guide to Oklahoma's Local Legends and Best Kept Secrets
Oklahoma has a history that's both notorious and peculiar, from legendary natives like Giggling Granny-a jovial woman responsible for as many as eleven murders-to Shaman's Portal, a gateway said to have swallowed handfuls of unsuspecting travelers over the last few centuries.  And keep your camera at the ready for shape-shifting “manimals”! On this tour of the Sooner State, you'll encounter the outlandish, exceptional, and bizarre.
Buy Now

The Knox Building was constructed in 1924. Of its six stories, the top two were built as a Masonic Temple, housing a large concert hall, banquet hall, and theatre, as well as ancillaries. At one time it was the largest and most active Masonic Temple in the region. It`s doors were abruptly closed in 1946 for reasons unknown. Between 1946 and 1981, no one was allowed onto the top two floors of the building. For years the owner refused to sell the building. Of the stories "The Lights," are the best known around the city of Enid. The director of the Enid Symphony had an encounter with George the elevator repairman walking the halls.

Clay Hall, Old Phillips University. This haunted dormitory was condemned by state in the early 1980`s. Voices have been heard here along with piano playing. Recordings of ghostly women singing have also occurred. March 2014, Clay Hall has since been sold and remodeled inside and is now apartments for low income senior citizens. So far no one has come running out of the building screaming!!!!

Meet me in the Green Room

The building in the middle is the former home of the Gaslight Theatre (known as the Alton Mercantile Company Building), where the owner hung himself. You can hear his foot steps and other strange noises. Just ask anyone who has spent time in the old theatre alone at night. hahahahahaaaaaaaaaaaaaaa

Lots about those spooky places

The stories include firsthand tales that have a powerful "creepiness factor" and believability. The various sites include haunted houses, ghostly graveyards, cursed roads, eerie eateries, spirited saloons, and more. But be warned: This collection of true tales set in actual locations is so chilling that you may not want to read this alone at night!

Strange State: Mysteries and Legends of Oklahoma.
The most comprehensive book on paranormal phenomena in the Sooner State. In addition to Ghosts, UFOs, Sasquatch and all else that goes bump in the night, this volume examines legends of buried gold, forgotten ghost towns, and mysterious places suffuse with unexplained forces. "Hudson has shown himself to be good at digging into old cryptozoology cases in the Sooner State, especially as it relates to bigfoot." - Loren Coleman, cryptomundo.com "Hudson takes you on an exciting journey..." - Oklahoma Today “Hudson does an amazing job . . . you won’t be disappointed.” - Ravanne Alexander, Territory Tellers/Raven Guard Press “. . . an entertaining read. Mr. Hudson has left few stones unturned in his research as he attempts to shake the truth free.” - Joel-Anthony Gray, Society for Paranormal Investigation “[Hudson] did a fantastic job!” - Terri French, Paranormal Investigation Team of Tulsa (PITT) 3rd edition.
Buy Now

Destinations for a Hauntingly Great Halloween

Take the kids or not you can gather your shivers at the following sites.

Let me know what you think and come see us sometime.