F ollow me now to Epidaurus, an ancient Greek spa blessed by the healing god Asclepius.

Even today, Epidaurus is an idyllic retreat. The Epidaurus Theater continues to host dramas on its 2,300-year-old stage. Sightseers still flock to the ruined splendor of Epidaurus' temples, hostels, stadium and music hall. Visitors who step away from the bustle of tour groups may find peace and healing of the spirit in the shade of ancient pines.

If you've just discovered Ancient Greece Odyssey, this is part seven of a myth scholar's travel diary from a trip to Greece in 2005.

Notes: Epidauros is a transliteration of Greek Ἐπίδαυρος into English. Asklepios (Ἀσκληπιός) is the Greek for Latin Asclepius.

Our expedition for the day was to the soothing sanctuary of Epidaurus. Once again, the long drive wended its way through farmland and rocky hills, olive groves and vineyards. Sone walls marking boundaries might be hundreds or even thousands of years old. We passed one Mycenaean culvert nearly 3500 years old!

We headed first for the theater, a beautifully-preserved monument in native limestone that was embedded in and preserved by the earth of the hill behind it. The acoustics of the Epidaurus Theater have been legendary since ancient times. I had promised my tour group that I would recite some Homer, and I think I did a fair job of it. The sound of my voice echoing back clearly from the top of the theater was very unnerving!

(Here's a rough recording of the opening lines of the Iliad. I need a real mike!) The Myth of the God Asclepius

Son of Apollo should raise eyebrows among those who know Greek myth. Zeus was infamously prolific in his philandering, but Apollo's affairs were seldom fruitful. In fact, they were often fatal to the unlucky mortals that caught his eye. Asclepius' mother Coronis was no exception. After she dared to take a human lover of her own, the god (or his sister Artemis, by some accounts) slew her for infidelity. Apollo rescued his unborn son from the flames of Coronis' funeral pyre.

Apollo placed his son Asclepius in the foster-care of the centaur Chiron, a "wise man" figure who appears in many myths. Asclepius surpassed his master's healing arts. In recognition of his skill, Athena gave Asclepius a great gift: two vials of blood from the body of slain Medusa, one of which killed instantly, the other possessing miraculous healing properties. But when Asclepius resuscitated a dead man, Zeus put a stop to him and his would-be Lazarus with a thunderbolt. Power over life and death belonged to gods alone.

Later myths assert that Asclepius was deified posthumously at his father's behest. Like Dionysos, Asclepius became a popular dying-and-resurrected god, one who had suffered and tasted mortality. He offered healing, compassion, and personal interactions with worshipers in contrast to the impersonal, official cults of the Olympians. In the Hellenistic age, classical gods faded into caricatures, literary devices. Yet Asclepius' popularity endured and increased. Asclepius' sanctuary at Epidaurus flourished from the 5th century BCE through the 4th century CE.

Note: See theoi.com's Asklepios entry for several pages of quotes from ancient Greek writers on the myth and cult of Asclepius.

Next we visited the Epidaurus Museum. It was a fascinating collection of offerings by grateful patients. Some had dedicated portraits of gods and goddesses, some replicas of the body parts that had been cured. Accounts etched in stone recorded miracles: hearing restored, a spear-point dropping from an old wound during a night spent sleeping by the god's temple. A cabinet of surgical tools reminds us that the priests of Asclepius were also doctors.

I was drawn to several statues of Athena, my favorite goddess. Many were casts; the originals now reside in the National Museum in Athens. There was also a striking Hellenistic portrait of Asclepius with a kind and benevolent face (left, Roman copy of a 4th century BCE Greek original). His serpent, an ancient symbol of death and rebirth, finds its way into modern medical symbolism -- doubled in America, where everything is supersized. There was also an intricate Corinthian capital, surprisingly well-preserved, and large portions of the temples of Asclepius and of Artemis.

Many ancient cultures revered and feared serpents, along with any other beast that was especially lethal for its size. Animals with the power to cause instant death seemed to have power over life itself -- perhaps they knew how to cure as well as kill? Moreover, the snake was observed to shed its skin and emerge renewed, apparently younger and healthier.

The caduceus, the winged staff with two serpents (left), was not a medical symbol in antiquity; it was the wand of the messenger-god Hermes. He used it to guide the spirits of the dead to the afterlife. American medicine confused it with the single snake-wrapped staff of Asclepius, possibly conflating it with the symbolism of medieval alchemy which took Hermes as its patron. However, American EMS services use the Star of Life, a blue symbol with the single-snake Rod of Asclepius (above right), which is also more common in European medicine. Translation of an Inscription at Epidaurus

“A small dumb child came to the sanctuary to beseech the god to give him a voice. After performing all the preliminary sacrifices and rites, the Pyrphoros, the servant of the temple, turned to the father of the child and asked him, 'Do you promise to pay the medical fees within one year if your child is cured?' 'I promise,' replied the child suddenly.”
-- Source: Epidaurus: The Sanctuary of Asclepios and the Museum by A. Charitonidou

The Sanctuary of Asclepius

We moved outside to explore the sprawling grounds of the sanctuary complex. Nearby lay the foundations of a hotel or hospice, a jumble of moss-covered stone blocks from what was once a two-story building. Squares of twenty rooms each surrounded four internal courtyards: 160 rooms altogether. A short stroll away was the Greek bath-house, with a few isolated bath-tubs sitting incongruously under open sky. There was a large banqueting complex to which had been added a Roman Odeion, a music hall. There were also a gymnasium and athletic grounds for patients on the mend, including a stadium, a track for footraces.

Stadium of Epidaurus: bleachers on left side reconstructed

Closer to the entrance of the sanctuary were temples. Artemis had a place here, since she is goddess of childbirth as well as the hunt. All that was left of the Asklepion, the tholos-tomb for the god Asclepius, were concentric rings of stone foundations. There was said to be a labyrinth beneath them where the serpents of the healer-god were kept. Nearby were the remains of the Abaton, a long dormitory where suppliants once slept and prayed for a dream-visit from the god who might prescribe a cure or even heal them while they slept.

The grounds of Asclepius' sanctuary were covered in tall waving grass and flowers, especially chamomile. At the end of our guided tour, I returned to a rock beneath a tree growing in the ruins of the hospice. I sat and listened to the wind rushing through the pines, a murmur like the distant sea beyond the horizon. It was a restful, soothing place. It felt as if some healing magic of Asclepius still lingered there. Did I hear the hiss of snakes, or was it only the wind?

The Cult of Epidaurus

How the God Healed the Sick

Suppliants to Asclepius' sanctuary at Epidaurus followed a set procedure. An inscription at the gates prescribed that they purify their thoughts. Once inside, after praying to the god at his temple, they would wash at the Sacred Fountain, then make what offering they could afford. The wealthy sacrificed an ox, others sacrificed a rooster, and the poor brought fruits and cakes. Those from far away offered money.

Patients were then ready to begin treatment. We don't know what rites they underwent to prepare them to meet the god, but there seems to have been fasting, perhaps some pampering and physical therapy at the baths and gymnasium, and religious rituals designed to put them in a receptive, exalted state. Some guess the labyrinth beneath the god's temple was used for this purpose.

The most important part of the cult was the ritual of Enkoimesis, "sleeping in." The long dormitory-like Abaton near the god's temple had small cells where the patients would be led by torchlight. They would recline on kline couches. Dropping off to the sound of hymns, the scent of incense, and the pure air of the god's sanctuary around them, they would fall asleep entranced. During the night, many patients dreamed that the god came to them and cured them: many would demonstrate wounds closed, scars healed, or other miracles to the the attending priest, who came to them in the morning. The priest would ask, "What did you dream?" and record dreams and their results -- which in later centuries became "case studies" that priests could apply to similar cases.

Photo: The Sanctuary of Epidaurus

I spent most of my time at Epidaurus drinking in the atmosphere instead of snapping photos, but here's one overview. I'm not 100% of the foundations in the foreground -- I should've taken notes! -- but in the background, both under scaffolding, are the foundations of the Asklepion, Asclepius' temple (the rest is inside the museum), and at right the columns of the Abaton dormitory where suppliants dreamed their cures.

Epidaurus and the Therapeutic Method

As Greek science and medicine began to replace old superstitions, the sanctuary at Epidaurus adapted. Instead of being physically cured by the god during the Enkoimesis sleeping ritual, the patient would simply dream of the god prescribing the cure -- or perhaps have a cryptic dream that needed interpretation. The priest who asked, "What did you dream?" would then interpret the dream and prescribe a diet, medical procedures, and/or other treatments during an extended stay at the sanctuary. It was a unique doctor-patient relationship augmented by faith and hope.

In her lecture about Epidaurus, Dr. Christine Downing who led our tour discussed how Sigmund Freud was inspired by Epidaurus. Freud did not aim to copy the therapeutic method of Epidaurus blindly, but simply to understand and apply the psychological factors that may have contributed to its success. He experimented with using a kline couch to help the patient relax (whence "clinic"), he sought for clues to a patient's psychology and stresses in dreams, and he used a "talking cure" to help the patient heal him/herself via an altered state of consciousness. The word therapist comes from the ancient Greek word for the attendant-priest who asked, "What did you dream?" (Chris said the priest was a therapeut, but I can't find this word; it may be therapon, attendant.)

By coincidence, our visit to Epidaurus was on Freud's birthday.

Where Is Epidaurus, Greece? - From Google Maps 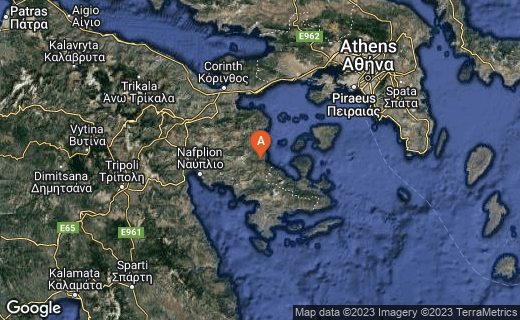 Next, I'll be exploring the medieval port-city of Nauplion where we stayed during our expeditions to Mycenae, Tiryns and Epidaurus!