Chocolate Falls in Arizona: Photographing a Flash Flood on the Little Colorado River

Grand Falls Goes from a Trickle to a Raging River

The Little Colorado River, which begins high on Mt. Baldy in eastern Arizona and runs -- sometimes just barely -- 315 winding miles to its junction with the mighty Colorado in Grand Canyon, is a very moody river. One minute, you might step over the wee ribbon of water and, the next, step back! You don't want to get caught in that boiling, muddy torrent.

Nowhere can the Little Colorado River (also known as the LCR) be as dramatic as it is where it drops down the huge natural stairway at Grand Falls, otherwise known as "Chocolate Falls," located 30 miles northeast of Flagstaff, Arizona. And that's where I was in August of 2005, when I took this photo. That's my red truck up there by the overlook, not far from a spot where you can sometimes drive right across the river. Not so on that day!

And I've been there many other days since, during other flash floods and even when not a drop was flowing where the falls had just recently been and would soon be again. I've been to this hidden, remote desert beauty as a regular outdoor enthusiast and as a Search & Rescue team member on a missing person search, which you can see and read about below, along with other information about visiting Grand Falls.

About these photos: All photographs on this page were taken by me, Deb Kingsbury. If you'd like to use one on your own web page, please credit me,with a link back here. Thank you!

An amazing site to see in the Painted Desert

Grand Falls is located on Navajo Nation land, at the southwest corner of the Reservation about a 45-minute drive from my home in Flagstaff. It's often referred to as "Chocolate Falls," for the reason you'll see in the photos and videos on this page: MUD!

When Do the Falls Run?

At 185 feet tall, Grand Falls is actually higher than Niagara Falls. And unlike Niagra, which is a major torrent year-round, Grand Falls runs the gamut from bone dry, like you see in my photo here, or merely a trickle during some winter and summer months to a raging force of nature during spring runoff from the snowy mountains to the east and after heavy monsoon season rains later in the year.

I can't give you exact dates or timeframes for when the water will be running high. The best I can do is point you to the USGS website to see the current conditions for the Little Colorado River near Winslow, AZ. As mentioned, your best bets for catching the falls at flood stage are in late spring and during monsoon season (roughly early to mid-July through late August / early September), but you'll want to check the USGS site to be sure before you go.

Update: It's March now, and Grand Falls is at its peak from snowmelt. See Fleeting Falls, the Area's Biggest Waterfall is Flowing Again from the Arizona Daily Sun.

The Formation of Grand Falls

This impressive waterfall was formed about 150,000 years ago, when lava from a nearby volcanic eruption from what is now Merriam Crater flowed into the canyon and blocked the river. The water then had to find a new course around the lava dam and back into the canyon, creating this cascade in the process.

Be Cautious and Respectful of the Land When You Visit

Grand Falls is quite isolated but well worth the long and sometimes dusty drive from Flagstaff or points east. Regular passenger cars can and often do make the trip to the south side of the river, but once the road turns to dirt, it can get washboardy. So drive slowly and don't attempt to actually drive across the LCR in a passenger car. Don't attempt it at all, high-clearance 4WD or not, when the river is running fast and high. (You can see what the road out to Grand Falls looks like in this photo.)

There's no charge to enter the Navajo Reservation and visit Grand Falls, but there are no services for many miles either. Be sure to keep the area clean, pack out your trash, be on the lookout for roaming cattle and desert wildlife, and don't get too close to the edge. There are some big cliffs with unstable rock and slippery mud along the banks. And there's no cell phone service to call for help if someone runs into trouble.

That slippery mud I was talking about? This guy got a bit too close to it and needed a few hands out.

More Photos from that Day - I was covered with muddy spray after taking these pictures....

You could hear the sound of large boulders being moved by the incredible force of the water.

Grand Falls on a Very Different Day - I returned to Grand Falls when the LCR was running much, much lower and took these photos....

A Gentle Brown Cascade of Chocolate

Walking on Grand Falls - Find out why we did this below....

Search and Rescue teammates and I searched different levels of the falls soon after a flash flood, when the falls were once again just a trickle. We were looking for a missing person who may have gone over the edge.

You can read about this SAR mission and see more photos from Grand Falls and further down the Little Colorado River in my blog post, Searching for Justin.

Hiking to the Bottom of Grand Falls

You've driven all the way out there, so explore some more if you're able.

As you're facing Grand Falls, if you walk along the rim to your left -- to the west -- you'll come to a short, rough trail that leads to the bottom. That's where we're going in this photo here.

The trail from the overlook leads to the Gauging Station, then turns to the right and takes you to the bottom of Grand Falls.

Watch your step as you descend. There's one short downclimb along the way, but you'll be fine if you take it slow and use your hands.

Please don't go down there when the falls are running high. We don't want to have to look for you downriver.

At the bottom of the Little Colorado River Canyon, hiking towards Grand Falls

There's lots of cool exploring to be done at the bottom of the LCR canyon and base of the waterfall when the water is low, but you're sure to also see an interesting variety of flotsam and jetsam that's been washed downstream and caught by rocks, mud and vegetation. Be careful of broken glass and other sharp objects. On the other hand, you might just find some treasure too!

Video footage of the LCR's Lows and Highs

Running Dry - Not too many people shoot video here when the water isn't actually flowing.

I haven't either (yet). And I searched and searched for footage showing a dry, still or barely flowing Little Colorado River at Grand Falls. This is the only video I found that shows -- briefly on fly-by -- a dry waterfall.

You'll also see footage as the helicopter flies downstream above the LCR, which still has water in it.

Dry, cracked mud at the base of Grand Falls

This video, taken during first week of August 2010, shows the Little Colorado River at Grand Falls when the water flow was about 1800 cubic feet per second. The flow was even greater a week earlier, the flooding due to a large amount of monsoon season rainfall in Eastern Arizona.

How High or Low is the Little Colorado Running?

More Reading About and Photos of Grand Falls

Dusty and flat, but you don't need 4wd

Take Winona Exit 211, 14 miles east of Flagstaff, and drive two miles on the Townsend-Winona Road. Then turn right on Leupp Road to the Grand Falls turnoffs, following the directions above.

From Kykotsmovi on the Hopi Indian Reservation

You'll need to click on the map and drag it up to see the roads you'll take from Flagstaff, once you zoom in far enough.

Yep, there's a lot of wide open country out there! 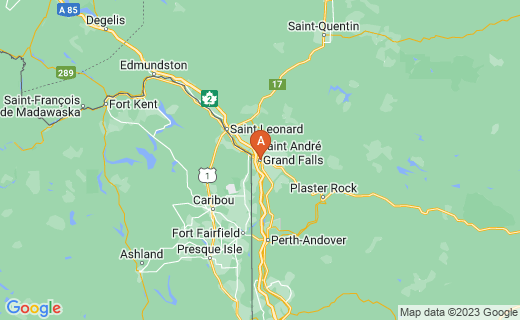 Have You Ever Seen Grand Falls, the Chocolate Falls of Arizona? Or any of the Little Colorado River?