A ghostly tale - the Lady of Nunnington Hall

Nunnington Hall in North Yorkshire is a lovely old manor house and family home dating back to the 13th century. However, it is regarded as being predominantly 17th century, although the west wing dates back to 1580. It housed Parliamentary troops during the Civil War and was quite badly damaged. The house was extensively remodelled and refurbished in 1685 and more recently in the 1920s.

...the terrified SCREAM of a young boy pierces the quiet stillness of the night...

The ghost of Nunnington Hall

As was the custom in days gone a husband who lost his wife would often remarry, especially if left to raise a young son on his own. The squire of Nunnington Hall was no exception and took a young and beautiful lady as his second wife. It was not long before she became pregnant and gave birth to a son, a second heir. But she was mean and spiteful, hated her stepson and treated him poorly.

The squire died a few years later and his widowed lady wanted her son to inherit all. She became even more bitter and cruel towards her stepson and imprisoned him, locking him in an upstairs attic room, alone, cold and poorly clothed, left to survive on a diet of bread and water. She forbade all in the household to have any contact with him and kept a strict watch to ensure this was so. She was a lady who enjoyed the finer things of life and so dressed in expensive satins and silks. She had a quiet step, a soft tread and often all that could be heard of her approach was the soft rustle and swish of her gowns as she moved around the house enforcing this isolation.

However, her son missed his stepbrother and their camaraderie. He started to creep up to the attic to see the older boy, so they could talk and play, and would take with him food and toys. Then one day he sneaked up to the attic and found the room completely empty. The older stepbrother was gone. Had he escaped, run away to sea, or simply been murdered by his wicked stepmother?

The young boy was inconsolable and could not believe his elder stepbrother would just desert him. In his grief he would spend his days wandering around the house, in and out of every room looking for him in all the nooks and crannies, peering through all the windows to see if he was in the grounds and gardens beyond. He entered the 'panelled room', climbed up to the window to look out, lent too far and fell to his death on the gravel path below.

His mother was heartbroken, deeply affected by her young son's death. She would sit for hours in that 'panelled room' staring out of that very same window mumbling to herself. When darkness fell she, too, would wander around the house for hours, in and out of every room calling out her son's name. Such was her pain and grief her health slowly began to deteriorate and she died.

But the story does not end there, and Nunnington Hall passed to new owners.

Before long strange things began to happen. At night the sound of the rustling of a lady's dress brushing against the stairs was heard and the sound of weeping. There were children's voices whispering in the attic, the bang of doors opening and closing. A house guest staying in the 'panelled room' recounted how during her stay one night a black and shapeless figure seemed to walk through the wall, pass over her bed and go out through the window. Then there was the terrified scream of a young boy piercing the quiet still of the night.

And it is still happening to this day. But you don't have to take my word for it. Talk to some of the people who work there!

Where is Nunnington Hall...

Nunnington Hall is in North Yorkshire, in the village of Nunnington four miles southeast of Hemsley off the B1257 Hemsley to Malton Road.

Car parking is free and there is a tea room and gift shop.

The property is in the care of the National Trust. Please check their website(see link below) for opening times. 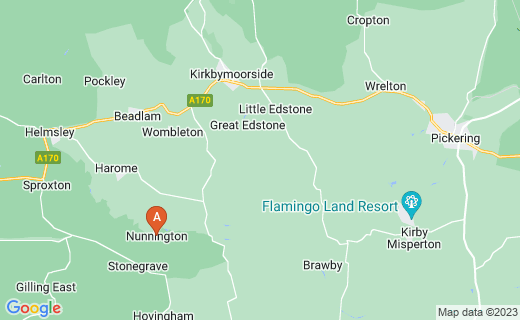 Other things to enjoy

Nunnington Hall stands on the banks of the River Rye, set in grounds and gardens, including a sheltered walled garden with plants and flowers, wild flower meadow, orchards and free wandering peacocks and ducks.

The Hall is also the home of the Carlisle Collection. Housed in the attics and former servants quarters, the collection is the work of Kitty Carlise who commissioned craftsmen to make furniture and items for a series of period miniature rooms to a scale of 1/18. The detail is simply amazing.