Historic Sites and Museums on The Royal Mile, Edinburgh

An Introduction to The Royal Mile, Edinburgh

The Royal Mile is a system of four consecutive streets in Edinburgh's Old Town, which connects Edinburgh Castle at the top of the hill with The Palace of Holyroodhouse at the bottom. This is the historic heartland of the City of Edinburgh and a walk down The Royal Mile affords cultural experiences with almost every step. These are the streets which were once walked by such diverse historical luminaries as the writers Robert "Rabbie" Burns, Robert Louis Stevenson and Sir Walter Scott, to the darker presences of graverobbers Burke and Hare and the infamous Deacon Brodie.

This page will look at a representative example of the different museums and other historical locations which can be found and enjoyed on The Royal Mile, starting at Castlehill at the top and progressing down along The Lawnmarket, The High Street and The Canongate.

Edinburgh Castle is one of the first things which most people will think of when they think not only of The Royal Mile but of the City of Edinburgh. The rock upon which the castle is built is actually an extinct volcano, dating back some 340 million years. There is evidence of human habitation on the site dating back to the 10th century BC but the first historical reference to any form of fortress on the site is from the 7th century AD.

The esplanade of the Castle - seen in the image to the above right - is where the Royal Edinburgh Military Tattoo takes place for approximately three weeks each summer, with large temporary stands erected for the purpose.

Full details of Edinburgh castle, its opening times and admission prices can be obtained via the link below.

St Giles' Cathedral is found near the top of The High Street. It is named after the patron saint of Edinburgh, St Giles, a Frenchman who never actually visited Scotland or Edinburgh. The cathedral dates back formally to the 13th century AD but there is considerable evidence to suggest that the site was used for worship for several centuries prior to this date.

St Giles' Cathedral is very much still an active church today. Admission is free but visitors are requested to make a donation to its upkeep. There is also a shop and cafe for the use of visitors and full details can be found on the official website.

Edinburgh After Dark: Ghosts, Vampires and Witches of the Old Town
Buy Now

Mary King's Close is Edinburgh's answer to the land that time forgot. The reason is that Mary King's Close is the most famous example of an older Edinburgh, a network of underground streets and chambers that were abandoned and forgotten for centuries. These streets actually were where the city's poorest people lived, worked and died. Tours are available daily but are not perhaps for those of a nervous disposition. Tales abound of the ghosts and restless spirits which exist in these locales and paranormal investigators visit this domain on a regular basis, hoping to encounter the as yet unexplained...

The video below affords some idea of what it is like in Mary King's Close.

John Knox was the instigator of the Scottish Protestant Reformation and is generally considered to be the founder of Scottish Presbyterianism. Although John Knox did not actually live in this house but in one close by, the building is a fabulous monument to 15th century Edinburgh. It is now owned by the Church of Scotland and is part of the Scottish Storytelling Centre, located immediately next door.

John Knox House is open to visitors all year round, six days a week. In July and August, at the height of the tourist season, it is also open on Sundays - a fact of which John Knox would probably not have been likely to approve. 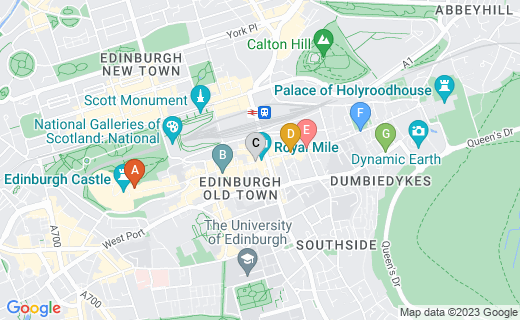 It is likely to take at least several hours to even begin to appreciate the historic museums and sites which are to be found on The Royal Mile. This means that lunch is likely to be required somewhere along the way. There are a great many restaurants, cafes and pubs which serve food the entire length of The Royal Mile but there is one in particular where an extra little bit of the history of Scotland can be sampled.

Whisky is known to have been produced in Scotland for more than five hundred years and is associated with Scotland probably more than anything else around the world. There is, however, an even older drink which has been produced in Scotland since before the time of whisky and that drink is blaand. The Tass - a pub at the very bottom of the High Street - actually sells blaand and it is possible therefore to both enjoy a hearty lunch and take the opportunity to sample something very distinct and different.

The Museum of Edinburgh

The Museum of Edinburgh is located on The Canongate, the final leg of The Royal Mile on the approach to The Palace of Holyroodhouse. It is refreshing to note that there is no admission charge levied at the Museum of Edinburgh. The museum contains all sorts of fascinating exhibits from life down through the centuries in Edinburgh. Items include everything from decorative art, to archaeological finds, to the dish presented to the famous Greyfriars' Bobby, the little terrier which spent years guarding the grave of its dead master and captured the imagination of all who heard the tale.

The Museum of Edinburgh

The Queen's Gallery is located immediately outside the gates of The Palace of Holyroodhouse. The exhibits are all from the British Monarch's collection and are changed frequently, often including items displayed in Scotland for the first time. This means that return visits to The Queen's Gallery can prove to be pleasurable and informative on an ongoing basis and that there is likely always to be something new to see and admire.