There are tens of thousands of people who visit Edinburgh City Centre on a daily basis. The purpose of these visits will vary hugely and relate both to business and to pleasure. Although the vast majority of daily visitors to Edinburgh will know of the city's incredibly rich, historical past in so many respects, a great many will not realise the significance of certain places which they walk past on a regular basis. This site is devoted to looking at some of the attractions of historical interest which are within easy reach of the Edinburgh resident, or day visitor, right in the very heart of the city centre, and can easily be viewed and appreciated - in some cases, during a lunch hour.

Car parking in Edinburgh City Centre can not only be difficult but also extremely expensive. Particularly therefore in these times of the controversial project to reintroduce trams to Edinburgh and the traffic chaos it is causing, a large percentage of day visitors to the city will arrive by train. The map below shows the location of Edinburgh's Waverley and Haymarket railway stations - the principal two in the city - and will allow visitors to relate their arrival point to the locations featured on this site.

For those who may arrive by bus, the location of Edinburgh Bus Station in St Andrew's Square is also shown. The bus station services both local routes and long distance routes from around Scotland and beyond.

Note that any of the images on this site can be enlarged simply by clicking on them once. The larger image will then open in a new window. 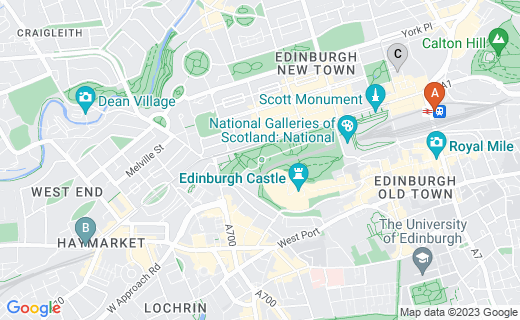 There are several ways in which it is possible to exit Edinburgh's Waverley Station but those who emerge from the principal entrance/exit on to Waverley Bridge will see the stunning edifice pictured right only a couple of hundred yards away. This is The Scott Monument, erected between 1840 and 1844 as a permanent tribute to the City of Edinburgh's much loved son, Sir Walter Scott, who died in 1832.

The Scott Monument is an impressive structure simply to walk past and view from the outside at ground level but it is amazing, the number of people who see it on an almost daily basis but have never taken the time to venture inside. For a small admission fee (£3.00 per person at the time of writing) it is possible to go in to The Scott Monument, view the exhibits and - for the more energetic - to climb its 287 steps to the summit and enjoy spectacular views of the City of Edinburgh and beyond. It is important to note, however, that the spiral staircase is extremely narrow and such as bulky backpacks are not a good idea.

The slideshow below gives an idea of some of the views which can be enjoyed from the top of The Scott Monument. Edinburgh is quite literally a city divided in two. There is the Old Town - where can be found Edinburgh Castle among many other wonderful attractions - and there is the New Town, that which is featured on this page. The division between the two is the grassy parkland of Princes Street Gardens.

Up until the year 1760, Princes Street Gardens were under water. The Nor Loch was a stagnant, polluted body of water, upon which drainage began in this year. This was necessary due to the expansion of the City of Edinburgh and the desire to build a New Town to facilitate continued growth. This means that visitors approaching Waverley Station by train from the West now travel along what was previously the deepest part of the loch.

Since their creation in the early part of the 19th century, a number of attractions have been built or located in Princes Street Gardens. Although The Scott Monument is the most famous and perhaps appealing, there are a number of others worthy of inspection.

Princes Street Gardens are themselves divided in two - Princes Street Gardens West and East - by The Mound, so named because it was quite literally formed from a mound of earth at the time of the draining of the Nor Loch. The Ross Fountain is located almost at the Western extremity of the Gardens, in the shadow of Edinburgh Castle, as seen at the top of this page.

The Ross Fountain was built in France, near Paris, and displayed at an exhibition in London in 1862. It was there that it was seen by wealthy Edinburgh businessman, Daniel Ross, who purchased it for the City of Edinburgh. It was dismantled and shipped to the Edinburgh port of Leith, where the Royal Yacht Britannia is now berthed.

The fountain is best described by part of the inscription which appears near its base:

"The figures were sculpted by Jean-Baptiste Klagmann who also made works for the Louvre and de medici fountains in Paris. The first tier has lion's head spouts and mermaid figures with flowing urns, sitting on scallop-shell basins. The four upper figures depict Science, Art, Poetry and Industry. At the top a beautifully modelled figure holds a cornucopia - cup of plenty."

There are many who will walk past the War Memorial in Princes Street Gardens West without ever realising its full significance. Erected in 1927, this particular War Memorial was a gift to the people of Scotland from Americans of Scottish descent, to commemorate the bravery and the ultimate sacrifice made by so many Scottish soldiers during the First World War. It was formally dedicated by the United States' Ambassador to the United Kingdom at the time, Alanson B Houghton.

The text on the base of the monument upon which sits the figure of the Scottish soldier can be partially distinguished by clicking on the image to enlarge it and reads:

"A Tribute From Men and Women of Scottish Blood and Sympathies in the United States of America to Scotland.

"'A People That Jeopardised their lives unto the Death in the High Places of the Field,' Judges V 18"

Why would any of the thousands of people who wander by this modest former town house - now a nondescript office - on Edinburgh's South Charlotte Street bother to give it so much as a passing glance? It does not stand out in any way from the other buildings on either side of the street, so what possible significance could it have?

The significance of this building is that here was born a man who not only changed the world of his own time period but went a considerable way towards shaping the world in which we live today.

There is a very small plaque next to the entrance to the building to commemorate this fact, which can be seen below and reads: 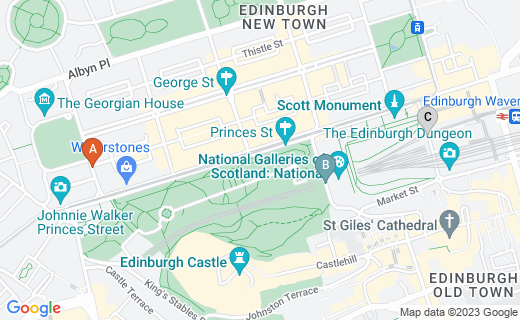 Have you ever visited any of these Edinburgh City centre attractions?