Hollister California -- The City That Is!

That's Right. Not the Store.

Beach, no. Farm land, yes. That is one of the differences between the real Hollister, California and the mythical one that Abercrombie & Fitch spun for its clothing brand. One thing both worlds have in common---lots of sun.

Hollister, California is where I was born and raised and returned to live after several decades of living in an urban area. I forgot how much I missed the wide sky and the low mountain ranges that surround the town. Excuse me, city. In 1980, the U.S. Census reported a population of 11,488. It tripled by the 2000 Census when the count was 34,413. Between those years, the city limits expanded as once upon-a-time farm fields and fruit orchards were sold and turned into housing developments.

Which Way to Hollister?

The fictional surf town of Hollister, California is located in Laguna Beach, a bit south of Los Angeles in Southern California. The real Hollister is about 300 miles north of Los Angeles. It is in fact part of California's central coast region. The nearest beaches, though, are about 30 miles away to the west in the Monterey/Santa Cruz bay area. 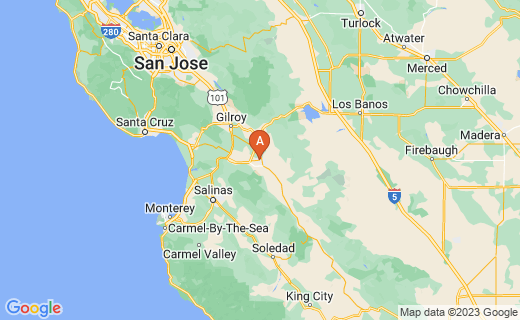 Hollister is the county seat of San Benito County, which population is nearly 57,000. Hollister, with a population of about 36,000, is one of two cities in San Benito County. The other city is San Juan Bautista, which is approximately seven miles to the west of Hollister. Incorporated communities in the county are Aromas, Tres Pinos, and Paicines.

Web sites to check out when you need or want to know more about the real city called Hollister, California.

The Mutsun Ohlones - The Original Residents

The first inhabitants of the Hollister area were the Mutsuns, a division of the Ohlone people. The Ohlones are also known as the Costanoans, the name that the Spanish called the local peoples when they explored the California coastal region, including inland valleys, between San Francisco and Big Sur. Spanish explorers and settlers encountered several Mutsun tribes in the Hollister valley and throughout San Benito county.

For more info about the Mutsuns and the Ohlones, check out these Web sites:

Going Back in Time

The City of Hollister was named after an Ohioan by the name of William Welles Hollister. He and his siblings headed west in the 1850s, driving thousands of sheep along with them. Hollister bought a 50 percent interest in Rancho San Justo, which the Flint-Bixby and Company purchased from Don Francisco Pacheco. At first, Hollister owned the land that was west of the San Benito River, and the Flint-Bixby group owned that to the east. After awhile, Hollister didn't think it was a good deal. The two parties eventually compromised and traded sides.

After another 10 years or so, Hollister sold all of his land to a group of farmers and ranchers who had formed the San Justo Homestead Association. He took his money and moved his family and sheep south to the Santa Barbara area. The association set aside 100 acres for a town, and in 1872, Hollister was incorporated as part of Monterey County. A few years later, San Benito County was created and Hollister was made the county seat.

For a precise reckoning of how Hollister came to be, visit the San Benito County Historical Society Web site.

So, why did the San Justo Homestead Association decide to name the new town after the man who left? Supposedly, some of the farmers didn't want to have another California town with a Spanish name. If you'd like to learn a bit more about Hollister, the man, check out the Wikipedia article William Welles Hollister.

Hollister was, is, and, with luck, shall always be an agricultural community. The San Benito High School mascot is after all a Haybaler. Not after the machine, but a farmer (any farmer) who bales hay. Go Haybalers!

Most, if not all, of the new neighborhoods (as of 1980s) in Hollister used to be be orchards (apricots, pears, plums, cherries, peaches, walnuts, and so on), crop fields, or cattle grazing lands. Today, a few farms still border the city limits.

Sustainable agriculture farms and vineyards/wineries have been slowly, but surely, increasing in number in the area.

Here are some links that will lead you to Web sites that can give you info about the different aspects of the local agriculture industry. You'll also find a few links for local farmers in San Benito County.

Hollister is full of cracks. Uh-huh. The ground beneath us is continuously shifting because of EARTHQUAKES.

I've heard say that we have an earthquake every day. Most are so slight, we don't know they're happening. Why not? Two major faults run through our area---the ominous San Andreas Fault and the just as menacing Calaveras Fault. Hollister saw much damage in both the 1906 San Francisco Earthquake and the 1989 Loma Prieta Earthquake.

Once upon a time, Hollister called itself the Earthquake Capital of the World. Parkfield, California now holds that title. Stilll, Hollister has a good share of geologists coming to town to study earthquake activity. Check out the following Web sites by researchers about the Calaveras Fault that runs through downtown:

A Virtual Tour of Hollister, California and the Calaveras Fault

A Walking Tour of the Calaveras Fault in Hollister, California

Hiking, rock climbing, camping, picnicking, gazing at Condors (if you're lucky), or just plain napping are some of the things you can do at the Pinnacles National Monument, which is part of the National Park Service. It's a long, windy 30 miles south of Hollister on highway 25.

The monument was established in 1908 by President Theodore Roosevelt and became a park in 2013. Over 23 million years ago, according to some scientists, the Pinnacles was a part of the Neenach Volcano that is located several hundred miles to the south near Lancaster, California. Yes, you read that correctly. The famous San Andreas Fault split the volcano and ever so slowly the fault crept and carried the Pinnacles to its present location. Amazing, huh?

For more info about the Pinnacles and all the flora, fauna, and fun there, clickity click over to Pinnacles National Park.

The Birthplace of the American Biker

As long as there have been motorcycles, there have been many bikers riding in, about, and through Hollister. Locals as well as visitors. But, that is not the reason some people have called Hollister the birthplace of the American Biker. That designation stems from the events that took place on the 4th of July Weekend in 1947. About 4,000 bikers, from all parts of the state and other states as well came to town for the 3-day motorcyle rally being held at Bolado Park, a few miles south of Hollister. A lot of bikers for a small town.

As you would expect, at night, after the races, some of the bikers came into town to relax, to party, to have some fun. And of course, some got drunk and rowdy. One biker even rode his motorcycle through a bar---the bar in the photo, in fact. Fights also took place. The small local police force had to declare martial law to keep things under control. When all was said and done, the authorities figured less than 1 percent of all the rally attendants were arrested and charged with...wait for it...misdemeanors.

The newspapers at that time turned the incident into a full-blown riot, exaggerating the events in story and photos. One famous photo is of a drunken man sitting on his bike. The story implies that he was a thug, an outlaw, and so on. Years later, it turned out that the photographer posed the photo (and others). The biker was your average everyday local guy. Several years later, the sensationalized events of that 1947 weekend inspired the movie "The Wild One." No doubt the movie also promoted the image of the biker who centers his lifestyle around his motorcycle.

In 1997, Hollister held an Independence Motorcycle Rally to commemorate the 50th anniversary of the incident. Tens of thousands of bikers, motorcycle enthusiasts, and friends attended. Except for a few years, the rally has been held every July, on or around July 4, since then.

For a better low-down of the 1947 incident, check out these Web sites:

The 1947 Gypsy Tour in Hollister

The 1947 biker incident in Hollister was the inspiration for the movie "The Wild One." The film came out in 1953. It was directed by Laslo Benedek and produced by Stanley Kramer. The star of the film was none other than Marlon Brando.

Novels Based in Hollister

Here are a couple of novels that set some or all of its story in and around Hollister. Enjoy! The Octopus: A Story of California

This is the second novel of an unfinished trilogy by Frank Norris, published in 1901. The story is about a very tense conflict between ranchers and the railroad over (what else) land at the end of the 19th century.

There's Something in a Sunday (A Sharon Mccone Mystery)

A mystery novel in which part of the story takes place in Hollister.

Here are a few of the events that take place each year in Hollister.

Photos of Past Events

Going to the Fair

Ever gone to a county fair? San Benito County holds one every year in the fall. It's a 3-day event. It's a blast! Carnival rides and carnival games. Cotton candy, funnel cake, and BBQ. One year, I even forked over a dollar to the see "The Strange Thing," which was a dried, shriveled chupacabra. Gross.

Children and adults throughout the county enter the flowers and vegetables they've raised; the crafts, clothes, cakes, and cookies they've made; the photos they've clicked and paintings they've created; and so on. All for the chance of being one of the best in their categories. (Future Farmers of America) and 4-H members also exhibit the goats, pigs, chickens, rabbits, cows, and other livestock that they have raised all year. After being judged and awarded, the kids sell their animals at an auction that takes place at the fair.

To find out more about the fair, visit the official Web site: San Benito County Fair.

The Hollister Mural by Ernie Valles

Thank you for visiting! Please come by again.

Your Say - Be my guest. Just please be nice and keep it clean.