It's the summer festival of Nakayama-dera

Hoshi Kudari is not as famous as the other Japanese summer festivals. Some might even think that Takarazuka--the city of the Nakayama Temple--is too far away to bother.

No need to worry, gentle traveler. It's at these smaller festivals that you will experience another side of Japan. Pay attention and you'll see things you won't find in any guidebook or gaijin website.

The main event starts at 9pm but there isn't any reason to stay home before that. In fact, many people arrive as early as 4pm.

The atmosphere is as fun and crowded as any other Japanese summer festival. As mentioned earlier, the entire temple complex is filled with people buzzing throughout enjoying the games and food.

Takoyaki and okonomiyaki are only two of the favorite dishes in the Kansai region. However, they require two hands and can get messy. So watch out! The locals love their beer and sake. Because they live close by, there is no need to worry about getting home. The children go for iced tea and water.

For carnival games, the children love goldfish scooping also known as "kingyo sukui." Many goldfish swim in a small kiddie pool. Catch them with a small paper-tissue net. Whatever you catch before the net falls apart is yours. Most people give their catch back. In this case, it's more about the fun than the prize.

As with all summer festivals, many people wear yukatas (casual summer kimonos) but most wear casual shorts and T-shirt. On this special evening, I wore a jinbei. It looks like a X-large T-shirt with matching shorts. Jinbei is popular with men and children because it is simple to wear and wash. It is light so it's perfect for a hot, humid summer evening.

Close to 9pm, things became quiet. People slowly moved toward the temple's main building, and the taiko drums began. The sound and tempo picked up. Most people come to the festival for this reason but I had no idea what to expect. Then at 9 it began: Hoshi-Kudari.

What you see below is a reenactment of the visit by Kannon bodhisattvas. The chanting parade consists of members of the community. Two more parades arrive and depart (making a total of three), one immediately after the other. The second parade wears white with red headbands and the final wears white with dark blue headbands.

Finally, the Buddhist priests play their music and slowly leave.

How to get here 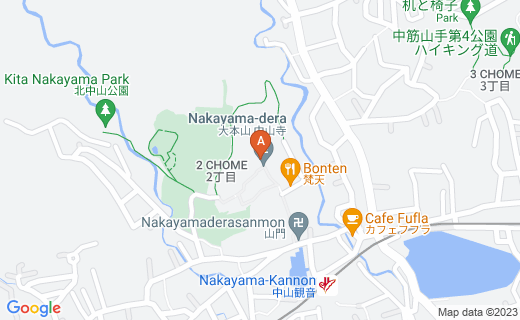 Things died down fairly quickly after the Hoshi Kudari. By 10pm nearly all the vendors were packing up and people were headed for home. The drummers had disappeared as well as the priests. I wanted to stay longer but there was no reason to. The trains would get crowded quickly so I called it a night.

If you want in, you'll have to wait until next year. If you're in Takarazuka just follow the crowds. If you're not, take a look at the map to the right.

Is this your kind of thing?