Sardinia is an autonomous island in Italy that lies in the Mediterranean Sea. Despite its proximity to Tunisia and the French Island Corsica, and its being part of Italy, Sardinia has established its own identity and character. Here, you will discover African influences and encounter a different language. Its diving spots, blue waters, distinct cuisines, and Roman ruins make Sardinia a worthy travel destination.

Sardinia has a couple of interesting cities you can visit, but the real charmers are its coastal towns. Thus, if you don't have time to explore the entire island, you must at least spend time at the seaside towns as they have so much to offer other than just the view of the picturesque Mediterranean coastline.

If you check the map the beautiful Sardinia is surrounded by clear Mediterranean waters. 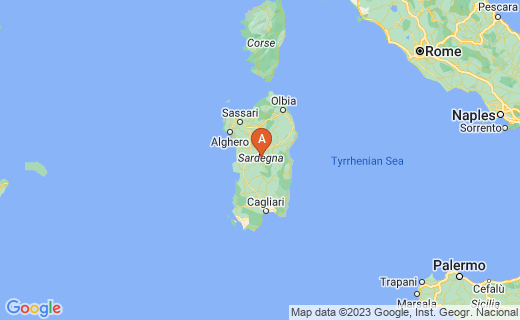 Sardinia is the second largest island in the Mediterranean Sea and an autonomous region of Italy.

Alghero may be named after the Italian term for seaweed, but it ironically offers some of the clearest waters in the region. You can't visit this seaside town without enjoying its sandy beaches and sun-baked streets. Alghero is also considered to be a shopping haven. Head out to Via Roma where shops and boutiques line up to tempt you. You will surely enjoy walking along the town's medieval archways and cobblestoned streets.

How many Stars for this Town?

5 out of 5 stars from 1 rating of Alghero Sardinia, Italy

Cagliari is a southern scenic coastal city found in the island's southernmost bay, Golgo degli Angeli. The Castello district is the oldest part of the city. Here, you can explore the confusing medieval alleys, well-preserved Roman ruins and other architectural masterpieces. The mighty fortification of Bastion of Saint Remy and the grandiose 13th century Cagliari Cathedral, deserve a visit.

Waves at them Poetto Beach

Despite of the Roman background of the city, Cagliari is also known for its cosmopolitan vibe and shopping streets like the Largo Carlo Felice. If you have spent enough time strolling around the old Castello district, proceed to the most popular relaxation and leisure spot in town, the Poetto Beach. This is considered to be the longest beach in all of Italy, and is well-loved by locals. The best time to experience Poetta is in the summer, where the atmosphere is festive. You can even continue enjoying the area at sundown as the beach is surrounded by restaurants, bars and clubs.

Inside the St. Mary Cathedral

The Town of Oristano

The town of Oristano on the island's northern region called Campidano plain was the previous site of bloody Saracen attacks, but today, the town has a calm and serene air, complemented with the quiet beauty of the Mediterranean Sea. One of the highlights of your visit is the remains of the old city in Piazza de Roma which includes a tower called Torre di Mariano. Other notable sites are the St. Mary Cathedral and And the neo-classic Church of St. Francis of Assisi. While here, you can sample the city's homegrown wine the Vernaccia di Oristano, and partner it with the delectable local cuisines.

Some of the sites you should not miss visiting while in town are the hauntingly Gothic Cattedrale di Snata Maria, and the fascinating Museo Diocesano d'Arte Sacra, which holds a fragment of the True Cross enclosed in a silverwork. One of the most favored destinations, just a 45-minute drive from Algrihero, is the Grotta de Nettuno found in Capo Caccia, which features caves with unique rock formations and stalactites and huge boulders In the summer, you can also take the boat ride directly into the mouth of the grotto. Guided tours are also available.

Would you go to this place?

Sardinia, Italy is gifted with a variety of retreat houses where you can take your family for an ultimate relaxation moment. After the hustle-bustle in the city or a busy day at the beach, you have the option to marvel the wonderful villas located just around the colorful place of Sardinia.