A small fortress atop a small hill

Ikeda Castle was once a mighty hilltop fortress that stood during Japan's Feudal Era. Today it is a smaller reconstruction, part of a beautiful, peaceful park: Shiroato Koen.

The original Ikeda Castle was built by the ruling Ikeda Clan in 1334. It was destroyed in battle in 1568. Although it looked similar to what you see here today it was larger in size then. I easily saw its strategic advantage as I struggled my way up the steep stairs below.

If Ikeda sounds familiar, it's because I've brought it up in a few other articles. Ikeda City is a suburb north of Osaka, Japan. Along with its festivals, it has a surprising number of tourist attractions including Ikeda Castle.

Himeji Castle and Osaka Castle are more famous because they are much larger and are not reconstructions. But for the locals looking for peace and quiet above the downtown noise, Ikeda Castle at Shiroato Koen fits the bill.

Shiroato Koen in the summer

Shiroato Koen is the park that surrounds much of Ikeda Castle. The center is an open field of grass. Here, the locals have picnics or exercise. Sometimes there are events such as concerts. However, it is preferred that visitors keep off the grass during other times.

For this purpose, there are two stone paths that surround the field. While walking along either path, you will see tulips and other flowers as well as different species of trees that line them. Every season is a different experience. Upon reaching the castle itself, there is a large pond at its base.

The pond is full of koi, or Japanese carp. There are thin strings that cross all over the pond like tripwire. At first, I thought this was to protect the koi from cats or birds. However, it is most likely to protect them from thieves. A large, brightly-colored koi can cost as much as ten thousand dollars!

Ikeda Castle in the autumn

Ikeda Castle itself is not very large--maybe the size of a two or three story building. Inside the castle are framed pictures of the castle during each season. It also has a patio that covers part of the koi pond. Sometimes there are concerts and traditional Japanese plays on the patio.

The castle has a staircase that reaches the top. From the top, you can see the surrounding communities for miles. This includes neighboring Kawanishi and the Inagawa River. The view is beautiful but it's the breeze that I love most. It is strong and cool and it never stops. It's a welcome relief from the summer humidity.

Going back down, you'll notice vending machines on the other side of the staircase. They sell iced tea and other drinks.

Also, you'll see a vending machine that sells pellets for the koi. For 100 yen, you can get a small pack filled with koi pellets. The pack itself is made of wafer. The koi are able to eat it all. Break open your pack and toss some pellets into the pond. They're always hungry (except during the winter) and they fight like mad for what you toss them. It's a lot of fun to watch.

Once you're done seeing the park and castle, take a minute to look closer and you'll see more. Through part of the field is a gentle stream and waterfall. It is lined with rocks. There are also traditional large wooden gates atop all the entrances to the park.

As small as all of this is, there is even a gift shop that sells snacks and souvenirs at the other end of the park. Nearby there are a few other buildings including a replica of an ancient "tea house." Such tea houses once dotted the countryside during the Feudal Era. They served tea and snacks to travelers. The replica here doesn't. It's just a replica.

Just outside the park, is a lush bamboo grove. It's hard to see from the park itself but with a little exploring you'll find it. It offers shade during a hot summer day and privacy for a romantic evening stroll all year round.

Serene Gardens: Creating Japanese Design and Detail in the Western Garden
There are many such gardens throughout Japan but if you can't visit you'll find it's possible to make your own.
Buy Now

Ikeda Castle in the spring 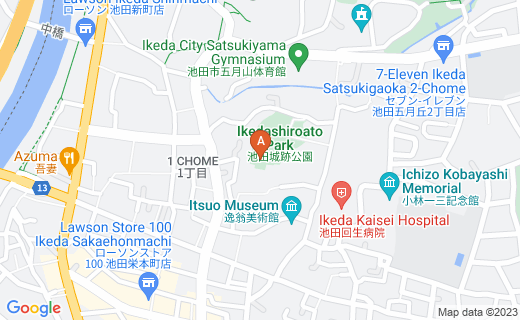 Ikeda Castle and Shiroato Koen are open all year round. However, they are closed on Tuesdays and from December 29th to January 1.

Admission to both are free to all. To the right is a map to Ikeda Castle. It's not too far from Ikeda Station.