Rain and Fireworks at the Inagawa River

On the 3rd Saturday of every August, the Japanese cities of Kawanishi and Ikeda gather at the banks of the Inagawa River for a night of summer festivities and fireworks (hanabi). Will the weekend's rain and thunder ruin the event?

We all know that rain can cancel any fireworks show. Which is what I expected on Saturday as a thunderstorm pounded the area most of the day before.

So why were people gathering along the river? Why were more arriving by train? Why were vendors still selling their goodies? Simply put, why didn't the cities just cancel the event?

Their excitement was hard to contain. They knew something I didn't. I decided to stay and check it out.

The Japanese cities of Kawanishi and Ikeda are neighbors. The Inagawa River divides them--Kawanishi is west of the river and Ikeda is east. Above is a picture of the river taken from the Kawanishi side on any other day.

People do not swim in the river because the most of it is too shallow. However, people sometimes fish here and many others have barbecues on the banks on warm, sunny days. In other words, the Inagawa is remarkably unremarkable.

Like other cities in Japan, Kawanishi and Ikeda have a fireworks show every summer over the river. Vendors line the banks selling food and snacks. People from other communities close by gather to enjoy themselves. It is a festival. However, unlike other festivals there are no religious themes here.

What to expect and what to wear

Mid-to-late August is as hot as it gets in Japan. Also, it is in the middle of the rainy season. So people came wearing shorts and t-shirts. There were not as many yukatas and kimonos to be seen but there were some umbrellas.

It got crowded quickly. With the grounds wet and muddy, things got messy soon. Kawanishi was well-prepared for the crowds. Police and security staff had cut off the road that runs alongside the Inagawa. They also had pedestrian traffic efficiently flowing one way towards the festival and another way back towards the train station.

Looking across the river, Ikeda was well-prepared also. Their banks are more grassy than Kawanishi's. Less concrete equals fewer vendors so people there were free to sit on their tarps and wait for the show.

People dutifully wandered the stalls in a slow march looking for a snack or sat among the crowds in the grass waiting for the fireworks show which started at 7:20pm.

Where to be and where to sit

Above is a photo of where Kawanishi's spectators sat. The concrete was reserved for pedestrians and shores were blocked for safety. There were places in the grass but not nearly as many as across the river in Ikeda.

To the left of me were the vendors. It was even more crowded. By now I understood why people were here as early as 3pm to stake out their spots--even in the rain.

It would be easy to find a place to stand to enjoy the show. However, for a family or someone who just wanted a place to sit, it seemed hopeless.

It was then, close to seven, when I miraculously met a friend. She was visiting her mother who lived in a nearby apartment building. It would be further from the river but they planned to watch from the roof. It was an easy decision.

Where to go in Ikeda 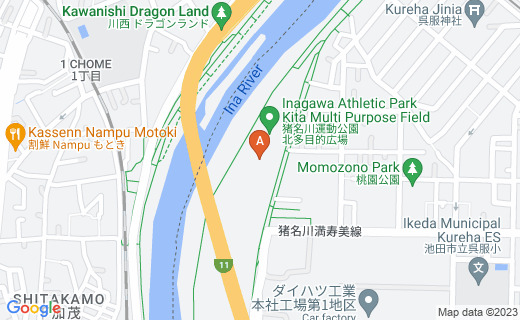 If you want to see the action from the Ikeda side of the river...

The fireworks show was not cancelled. It turns out this battle between fireworks and the rainy season happens almost every summer. It started at 7:20pm on the dot. In the end, the weather didn't affect the show at all. It was impressive. The video below is from the Ikeda side of the river, atop Satsuki Mountain. Enjoy!

Here are other experiences in Japan

It's not a big event but... - Some people seem to like it