The Covered Bridge Capital of the World

In Parke County, Indiana you will find 32 different covered bridges and some of the friendliest people in the country!

On beautiful spring day my husband and I took a drive to Indiana to visit and photograph their covered bridges. The Parke Country tourist information center in Rockville, Indiana made finding the bridges easy with a great map suggesting bridges to see on six different routes and by providing turn by turn directions.

With map in hand, we set out traveling the back roads of Parke county and discovering a wide variety of covered bridges along with a couple of mills, some beautiful scenery and some very friendly people. In a day and a half we traveled 176 miles of the county and visited 23 of the bridges.

My Google Maps - covered bridge capital of the world

This map will show you where Rockville, Indiana is located. It is near the center of Park county and the starting place for all of the bridge driving routes. We found the people at the tourist information center in Rockville to be very helpful.

We also would suggest staying at the Parke Bridge Motel. It was a delightful small motel with each room decorated with a theme. We stayed in the "Covered Bridge" room. You can find more information www.parkebridgemotel.com. 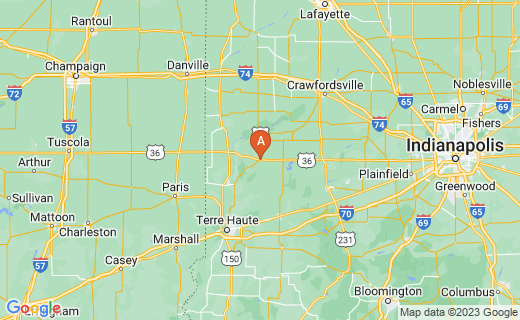 Th Mansfield bridge was built in 1867 over Big Racoon Creek in Mansfield. It is 247 feet long. You can see a long shot of the bridge in the intro photo and a closeup in the photo above.

This was the first covered bridge we visited and I was really excited photographic opportunities of both the mill and the bridge.

The mill is still in operation today and is the oldest continually operating mill west of the Allegheny mountains. It has a store inside the mill where you can purchase various grains produced by the mill and also a variety of covered bridge mementos.

In Parke County, Indiana along with all of the covered bridges you will find several Amish communities. They are know for their excellent handcrafted products. This covered bridge bird feeder would make a wonderful addition to a backyard garden.

The Mecca covered bridge, located on Mecca road, was built in 1873 over Big Raccoon Creek This bridge is 150 feet long.

This book was sitting on a table in the little motel that we stayed at in Rockville, Indiana. I found it very interesting. It described the types of bridges that were built at various times and had some wonderful photographs of bridges throughout America.

The Neet bridge was built in 1904 over Little Racoon Creek. It is 126 feet in length and the bridge was bypassed in 1996.

Inside the Narrows Bridge

Billie Creek covered bridge is located on the grounds of the Billie Creek village near Rockville, Indiana. This early 20th century village has been re-created using building from around Parke county. It has 30 buildings and 3 covered bridges. I took a walk through the village and saw an old school building, a church and many interesting shops and log cabins.

If you enjoy covered bridges, this great serving tray will make a wonderful addition to your decor. 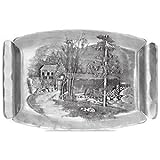 Although many of the bridges in Parke County, Indiana are still in use today, a few have been bypassed over the years. This bridge called the West Union Bridge was built in 1876 over Sugar Creek. it was bypassed in 1964 and can be found on Tow Path Road.

This bridge is in Roseville, Indiana. It was built in 1910 over Big Raccon Creek and is 263 feet.

Phillips bridge ws built in 1909 over Big Pond Creek. It is the smallest bridge we visited at 43 feet.

Much of the information for this lens was taken from brochures provided by the Parke County Tourist Center. You can visit the center in Rockville, Indiana or obtain the information online at Covered Bridges.com.

Have you ever visited a covered bridge? - stop by and leave a note