Cardia is a videographer from Barbados with a passion for travel, craft, writing and helping others.

Lush beaches, a colourful history, friendly people, and a growing economy, this Caribbean country is stepping up more and more onto the world stage, both as a place for investments and a popular tourist destination.

However, it doesn't just stop there. Here are a few interesting things you may not have known about this tropical island.

Barbados' location in the Caribbean 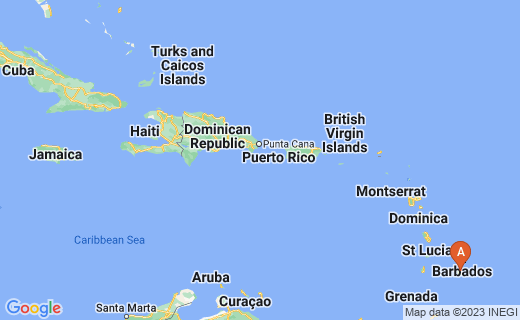 1. The country has a high amount of centenarians

Barbados (along with Japan and Canada) has the highest number of occurrences of centenarians in the world. When asked, the centenarians almost always attribute their longevity to their diets of local starches such as breadfruit, cassava, potatoes and yams, all of which are known to give energy and are found in abundance on the island. Recently, a Barbadian man (Mr James Sisnett) held the title of second oldest man in the world, and oldest man in the Western Hemisphere. Mr Sisnett died in May 2013 at the age of 113.

Along with most of the other Caribbean territories, Barbados is very active in the game of cricket. Several members of the West Indies Cricket teams are Barbadian. Famous former team members include Sir Garfield Sobers and Sir Frank Worrell (both of which are now national heroes).

During the ICC Cricket World Cup in 2007 and the ICC Twenty20 World Cup in 2011 (both held in the West Indies) Barbados hosted games at the Kensington Oval which is close to the capital city of Bridgetown, and can seat up to over 11,000 people.

3. It has the largest collection of British cannons

Barbados boasts that it has the world’s largest collection of 17th century British iron cannons. As of today, more than four hundred cannons have been found around the island. Many are on mounted on display at the Barbados Garrison in Saint Michael. The Garrison is a former British military base from the 17th, 18th and 19th centuries. It was also the base for the West India Regiment, a unit of the British army.

This area is part of the larger Historic Bridgetown and Its Garrison, which was declared an official UNESCO World Heritage Site in 2011.

4. It is the birthplace of Rihanna

Barbados is home to Robyn ‘Rihanna’ Fenty (affectionally nicknamed 'Riri' by locals), one of the most popular female singers of today. She was raised in the Westbury area in the parish of Saint Michael, and attended the Combermere School (other famous past students from this school include saxophonist Arturo Tappin and David Thompson, former Prime Minister). While performing at her high school’s pageant she was spotted by producer Evan Rogers, then later went to the US to pursue a musical career.

5. It was named by the Portuguese

The Portuguese were the first Europeans to land on the island, in the late 16th century. It is believed that these explorers are the ones that named the island. It roughly translates to ‘the bearded ones’ (The Portuguese word for beard is ‘barba’) and this could be thanks to the large population of bearded fig trees which grew in abundance on the island.

The first set of English settlers arrived in 1625. Until its independence in 1966, Barbados had no other European governance.

Yes, even the first American president paid a visit to this lovely island. Plus, it is said to be his only trip outside of the United States. In 1751 at the age of 19, Washington sailed to Barbados to accompany his older brother Lawrence who was suffering from tuberculosis. It was hoped that the tropical climate would help improve the elder Washington’s health.

They rented a house on the southwest coast of the island, just a stone’s throw away from the Garrison site. During his stay, the younger Washington contracted smallpox, which eventually immunized him against what would be a rampant killer during the American War of Independence.

The house in which they lived has been renovated and made into a museum with a short featured film about the Washington brothers’ trip to the island.

7. Home to the world's oldest rum

The Mount Gay Rum brand has been made in the island for centuries; the company holds a historic deed dated from 1703, making it the oldest brand of rum still in production. The distilleries are in the northern parts of the island, however there is a Visitors Centre closer to the capital where one can view the rum-making process.