The Iowa State Fair: A Top Iowa Attraction That Belongs on Your Bucket List

If you're looking for things to do in Iowa, it doesn't get any bigger or better than the Iowa State Fair. The annual celebration of Iowa agriculture and industry, a state tradition since 1854, has earned its reputation as America's classic state fair. The fair was immortalized in a novel by Phil Stong, has inspired three motion pictures and a Rodgers and Hammerstein musical, and is the only Iowa entry in Patricia Schultz's best-selling travel book, 1,000 Places to See Before You Die. Indeed, it deserves a place on your bucket list.

For 11 days each August, more than one million people descend upon the Iowa State Fairgrounds in Des Moines to be entertained and amused. They attend performances – many for free – of popular local and national music acts. They watch crazy competitions like the hog-calling and husband-calling contests, they marvel at half-ton pumpkins and one-and-a-half-ton bulls, and they dutifully file past the infamous "butter cow" and snap a few photos. When they're hungry, they have more than 60 kinds of food on a stick to choose from, including artery-clogging options like fried butter and deep-fried Twinkies.

The Iowa State Fair is much more than a collection of agricultural oddities and unwholesome food, however. It's an up-close look at the heart of the heartland. It's about the 4-H kid proudly showing her first bottle-fed heifer, the city kid petting an hours-old foal, the amateur pastry chef winning a coveted blue ribbon for his blueberry pie. It's about fun family memories captured in sepia in souvenir old-time photos. It's about the Iowa boys who met their future brides on the midway, much like the young couple in State Fair. It's a celebration of the state and its heritage, and of the hard-working people who make Iowa a great place to live. It's about good, old-fashioned American fun.

A brief history of the Iowa State Fair

The first state fair was held in Fairfield, Iowa, for three days in October, 1854. Fairfield hosted the fair again the next year, but it moved to a new community every two years thereafter. The fair moved permanently to Des Moines, the state capital, in 1878 and relocated to its current home on Des Moines' east side in 1886.

The Iowa State Fairgrounds comprise 445 acres, including 160 acres of campgrounds. Many of the buildings on the grounds date to the early twentieth century and are steel frame structures covered in red brick. Other buildings are even older, including a number of single-story wood frame buildings that were part of the original construction or were moved from elsewhere in Iowa. The fairgrounds were listed on the National Register of Historic Places in 1987.

Things to do and see at the Iowa State Fair

A first-time visitor to the fair can be overwhelmed by the seemingly endless amount of things to see and do. Go in with a plan. Check the daily schedule on-line to see the dozens of offerings each day, from cooking classes to dog shows to craft demonstrations. Note the time and location of the ones you don't want to miss. If that much advance planning isn't your thing, at least pick up a daily program and map at the gate and spend a few minutes perusing it when you first arrive to get your bearings.

In between programs, it's time to explore. Wander though the livestock barns. Check out the hundreds of exhibitors inside the Varied Industries Building (a great place to find air conditioning on a hot day) and the 4-H Exhibit Hall. Stop to watch an artisan demonstration in Heritage Village and shop the craft booths. You never know what you'll happen upon that will pique your interest. And make sure not to miss these great state fair attractions:

An Iowa State Fair institution since 1911, the butter cow is a life-size replica of a dairy cow sculpted from 600 pounds of butter molded over a wood and metal frame. Sound weird? Even weirder are the companion sculptures on display with the cow that also are created from butter. Past years' companion sculptures have included such random, non-dairy-related subjects as Tiger Woods, Harry Potter, and the Harley Davidson motorcycle. You'll find the Butter Cow in the Agriculture Building behind the throngs of people lined up for a look inside the cooler where it's on display.

Fun facts about the Butter Cow:

The Butter Cow isn't for eating, but you can get fried butter at the Iowa State Fair. It's just one of more than 70 fair foods served on a stick, with even more unstuck options. The fair's 200 food stands serve such favorites as corn dogs, turkey legs, and pork chops, which are wolfed down at a rate of over 5,000 chops a day. There are even some healthy options, like salad on a stick, for those watching their waistlines.

New food selections are added every year to the eager anticipation of fair food aficionados. Among the new offerings for 2016 are Ice Cream Nachos, Loaded Taters on a Stick, and Funnel Bacon on a Stick.

An old favorite not to be missed is the Hot Beef Sundae.

Of the tens of thousands of animal and vegetables entries, the most impressive are those competing in the jumbo and giant categories. Prizes are awarded in the jumbo tomato, big pumpkin, and 11 other vegetable categories. Giant animal classes include the boar, bull, pigeon, rabbit and ram. Also don't miss the Avenue of Breeds, located in the northwest corner of the Swine Barn, which features many different breeds of cattle, horses, chickens, sheep, and fish.

Some discounts and packages are are available. Visit the Iowa State Fair website for more information and schedules.

Getting to the Iowa State Fairgrounds 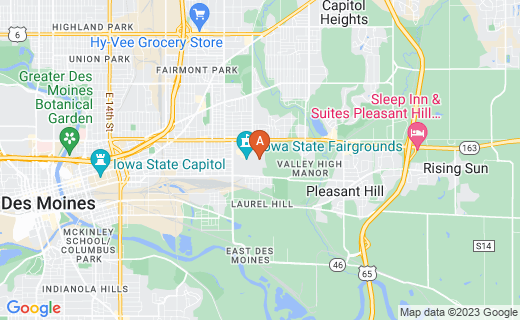 How the Iowa State Fair made it to Hollywood

A look by Paul Berge and Iowa Public Television.

The Iowa State Fair in print and on-screen