Myth and Faith Come to Life at Ise Grand Shrine

The gravel crunched under my feet and cleanest, purest air filled my lungs, I made it at last to the shrine of shrines: Ise Jingu or Ise Grand Shrine. My anticipation before this experience was overcome only by the peace I felt at the end of the day. Ise Grand Shrine is now one of my favorite travel destinations.

Ise Grand Shrine is actually a collection of over one hundred twenty Shinto shrines in a large evergreen forest. It is in Mie Prefecture of the eastern Kansai region. It could take weeks or even months to visit all of them. For me, I visited several shrines of the outer shrine (known as the "Geku") and the inner shrine (known as "Naiku") before reaching the Kotaijingu (the main shrine).

Kotaijingu is what most people think of when they think of Ise Grand Shrine. For good reason, according to Shinto legend, this is the home of the goddess Amaterasu-omikami. She is the goddess of the sun. Also here is the Sacred Mirror (the Yata no Kagami). This mirror is an artifact important in Japanese mythology. It represents honesty.

But, believe it or not, there's a lot more to see. Let's check it out!

Below is the best video you'll see about Ise Grand Shrine. You can skip the first 30 seconds.

Naiku and Geku: the outer and inner shrine

There was plenty of walking around the outer and inner shrine. This was fine by me because the landscape was soothing. As soon as I went through the torii (gate of the Shinto shrine) massive evergreen trees towered above me as far as I could see. I can't remember seeing trees so big.

I followed everyone else. They all seemed to know where they were going. Things were quiet. The loudest noises I heard were occasional birds and the gravel we walked on. The grounds of Ise Grand Shrine are paved entirely with gravel, not asphalt or concrete.

According to Japanese tradition, stones purify the surrounding area. You will find carefully placed stones in landscapes all over Japan. This true not only of Shinto but also of Japanese Buddhism.

The torii gates of Ise Grand Shrine are plain. Everywhere else, gates of the shrines are red or red and black. Here they are unpainted and unpolished. This is true of Ise Grand's shrines themselves.

The shrines are raised off the ground and have thick thatched roofs. They resemble ancient Japanese granaries. To see tradition preserved in such a modernized country always fascinates me.

Kotaijingu: the most sacred building

If the picture above looks familiar, you've probably seen it before here. There are also a whole lot of other pictures on the internets that look like this because these steps are as close as anyone can get to Kotaijingu to take a picture.

If the Kotaijingu looks new that's because it is. The Kotaijingu was rebuilt in 2013. Every twenty years, this building is rebuilt according to the same ancient tradition. It is built from wood gathered from the local forest. It is built next door to the previous Kotaijingu and on the grounds of the Kotaijingu before that previous one. Through the ages it moves back and forth, from left to right, then right to left.

Beyond the torii (Shinto gate) is another gate. This gate is the closest thatched roof in the photo. It is here where the journey ends. The visitors stop here to pray and make their offerings. Most give 10 yen. But for priests and staff, behind this gate is where the they'll see the Kotaijingu. In the photo above, you can see it on the right side. (Can you see it?)

I was surprised when I was told this but I understood. If I was a goddess, I wouldn't want thousands of people peeking at me all day. I climbed the steps as many before me had done. On reaching the top I saw an offering box. It looked the same as the boxes I'd seen at other shrines, only bigger to handle the traffic.

I tossed in my 10 yen, bowed twice, clapped twice, bowed again and prayed. Prayer at shrines takes a few seconds. After all, we don't want to slow down traffic. At the same time I didn't want to leave. This was such an important place and who knew when I'd be back?

So I stayed. I looked up and around. A few others did, too. After a few minutes it got boring fast. The gate was new and wooden. It was smooth and clean. I could have stood there for longer but I wouldn't see anything more than I had in the past few minutes.

Above is a picture of the Okage Yokocho. Simply put, it is a street where shrine visitors can buy food and souvenirs. It's within easy walking distance from the inner shrine. "Okage" means thanks and "Yokocho" means alleys. The businesses of this street are thankful to Ise Grand Shrine for bringing in Shinto pilgrims for hundreds of years.

Nearly all the buildings are recreated to the period. Here a traveler can visit small restaurants and vendors that sell the local specialties. Other places sell traditional Japanese confectioneries. I was already in postcard mode. Not only does Okage Yokocho have shops that can take care of this, it also has a small post office.

After sending myself a postcard I browsed some of the local shops. It was getting late and cold. Some hot sake would be perfect and within a minute I found a small bar. I huddled under its awning and reflected on my day at Ise Grand Shrine.

All the Shinto shrines I'd seen before today, they are real places. They are not just decorations to charm a foreigner. The traditional clapping and praying and offering--this means something. It is very real to the believers. This is what I found here. This is what Ise Grand Shrine taught me.

Directions to the Ise Grand 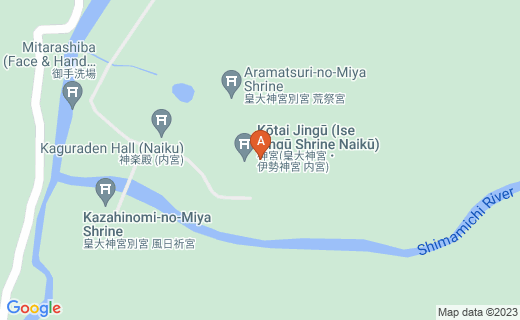 Would you visit Ise Grand Shrine?