Lake Windermere: Largest of the Lakes in the Lake District

Today Lake Windermere is full of wildlife including a multitude of fish and birds and supports a host of leisure activities including yachting, canoeing and leisure cruises tourist wishing to see the full splendour of Lake and surrounding countryside; the lake being surrounded by forested mountains on all sides.

One of the main tourist spot on the lakeside from where leisure cruise trips can be made is Bowness-on-Windermere; a beauty spot in itself with a swarm of friendly swans happy to be hand fed.

One of the cruise boats that regularly docks at Bowness-on-Windermere and other villages on the lakeside, from where they give trips around the lake being the 'Queen of the Lake'. 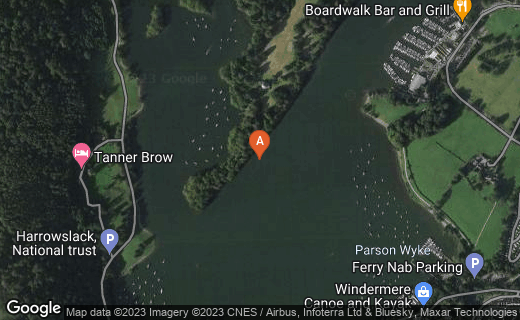 Lake Windermere is the largest lake in the Lake District, England, from where many leisurely cruises across and around the lake can be taken.

The Spectacular Lakes of the Lake District

A Place of Natural Beauty

The Lake District is without doubt a most gorgeous part of England, and Lake Windermere is the largest and most spectacular lake of all in the Lake District.

The Lakes in Cumbria were formed by ice from the retreating glaciers, gouged out of the mountainsides of Cumbria, North West England at the end of the last ice age over 13,000 years ago. The largest of all the lakes is Lake Windermere which measures 10.5 miles long, is a mile wide and has a depth of 220 feet; Lake Windermere is the largest natural lake in England.

I’ve been to the Lake District a couple of times and would go again given the chance. It’s a place of natural beauty with plenty of mountains and lakes to explore; and is very popular with people who spend a week or two camping in the hills and mountains as they explore this natural wonder by foot.

On our last holiday to the Lake District we rented an upper floor flat that overlooked Lake Windermere and from there explored the great lakes of the Lake District and the surrounding area by car; making day trips to many places including the childhood home of William Wordsworth, the Osprey Project, the mountain steam trains and the Beatrix Potter museum which is one of the many beautiful places around the edge of Lake Windermere worth visiting.

Bowness-on-Windermere is two towns, Bowness and Windermere (each with its own town centre that have grown and merged together to become one large settlement.

As well as the boat trips and all the pleasure cruises around the lake, Bowness also has a train station and buses serving the local area and the Windermere Car Ferry which runs from Bowness Ferry Nab to the Ferry House Far Sawrey on the other side (west side) of the lake; the trip, once you're aboard, taking about 10 minutes.

Day Cruise of Lake Windermere on the Queen of the Lake

One of our day trips was to take an all day cruise on Lake Windermere, boarding the ‘Queen of the Lake’, a traditional Launch Cruise’ at Bowness-on-Windermere. While waiting to board the ‘Queen of the Lake’ we spent a brief period feeding and filming all the hungry and friendly swans at Bowness eagerly waiting to be feed by passing tourists. Halfway through the day the cruise boat moored for an hour lunch at Lakeside on the far side of Lake Windermere, and while having our packed lunch and a coffee at Lakeside I took the opportunity to film the local steam train service running from Lakeside.

Steam Trains on the Lake

On the opposite side of Lake Windermere to Bowness-on-Windermere is Lakeside, where a train service on the Lakeside and Haverthwaite Railway (just over three miles long) is generally timed to connect with lake cruises on Lake Windermere. So tourist from Haverthwaite can catch a steam train to Lakeside in time to take sailings to Bowness and Ambleside.

The railway was originally opened in 1869 as a branch line of Furness Railway but closed in 1965 as part of the Conservative Governments policy to close thousands of branch lines across Britain. The railway re-opened as a heritage railway in 1973, and now (along with the seven miles long Ravenglass and Eskdale railway in the Lake District) serves as a vital and viable toniest attraction that provides an invaluable local transport service.

When on holiday in the Lake District, although we took the day cruise around Lake Windermere (from Bowness), which stopped at Lakeside for an hour at lunch time, we didn’t take a trip on the steam train. Although it was great fun watching the trains depart and return while we were having our lunch; albeit, earlier in the week we did treat ourselves to a trip on the other great railway on the Lakes, the Ravenglass and Eskdale railway, which was first opened in 1875.

Queen of the Lake

The 'Queen of the Lake' is just one of several pleasure cruisers, including the Miss Lakeland and Miss Cumbria operated by the 'Windermere Lake Cruises' company.

Eager to be Fed by Passing Tourists

While waiting to board the Queen of the Lake from Bowness-on-Windermere for our day trip around Lake Windermere we took the opportunity to film and feed all the hungry swans mingling with the tourists at this most beautiful town on the water’s edge. As the video will show the swans were eager to eat to the point of even trying to snatch food from you given the chance.

A Little Walk on the Lite Side

Our Holiday in the Lake District

While staying at Lake Windermere for the week we took daily trips to explore the rest of the Lake District including a visit to William Wordsworth’s childhood house and garden, and a trip to Dodd Wood at Keswick to see the Twitchers at the Osprey Project overlooking Bassenthwaite Lake; one of many memorable trips in our journey across the Lake District.

In fact not being able to fit everything in to one week we extended the holiday an extra day by renting a tent at the English Heritage camp site located in the mountains near Great Langdale, Ambleside; the village of Ambleside being on the far side of Lake Windermere to Bowness-on-windermere.

Extending our holiday by a day, staying on an English Heritage campsite high in the mountains, in the early evening we enjoyed a meal at Sticklebarn Tavern just a short drive from the campsite, and joining us was all the wildlife birds as shown in this short video clip.

Do you enjoy a good boat trip?