Living in a Cave House in Andalucia, Spain

The Caves in Spain are Mainly in the Altiplano!

"Cave House Country" is what I call the area in and around the Altiplano de Granada, a quiet part of Spain's Andalucia. This inland region of Andalucia is not far from the Mediterranean coast and some lovely holiday resorts. It also provides the traveller and resident alike with a variety of striking landscapes all set within a compact area.

I have lived in a cave house situated in the outskirts of a pleasant market town called Baza for some years. Baza is the main town of the Altiplano and the area all around it is what I call "Cave House Country" and is home to Europe's largest population of resident 21st.Century cave dwellers. Here can be found a multitude of quirky cave dwellings, from derelict holes in the hillsides to beautiful modern family residences. Not only have cave houses been lived in since 12th.Century Moorish times but they are still being constructed today using modern methods and materials.

Warm in winter and cool in summer cave houses are both eco-friendly and economical to buy. They make great first or second homes. If you're wondering what it's like to live in a hobbit-like home in an Andalucian hillside take a look at the photographs below, then read on.... 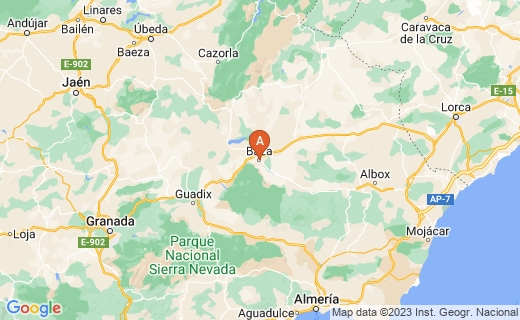 Cave Houses in and Around the Altiplano de Granada Living in a Cave House

More cave house information (and a couple of anecdotes)...

Cave houses come in all shapes and sizes. There are isolated country caves. There are town caves and village caves. There are also many properties that look like normal houses which have cave rooms underneath and/or behind them. Whatever the dwelling looks like, cave houses have all been excavated into the Andalucian hillsides by human beings. They are not damp water-worn limestone caverns. They are cut into the dry, compacted sedimentary layers of what was once the bed of a prehistoric sea. Cave houses are often hand-hewn historic dwellings that are full of character. They have usually been extended and developed over the years by successive generations of owners. The tasteful professional or amateur refurbishment of a traditional cave house can also add greatly to its charm.

One popular story about cave houses tells us, that in olden days when a woman became pregnant, she would excavate a further cave room for the new arrival! Another, that primitive baby alarms were constructed by boring listening holes through intervening cave walls. All I can say is that these ladies must have been superbly fit, because excavating cave rooms by hand is extremely hard work. Although minor excavations, like making a niche or space for a built-in wardrobe or set of shelves, can be fun.

The cave house dwellers of old often lived in very close proximity to their livestock. Donkeys, mules, pigs, rabbits and chickens were often accommodated in subterranean chambers next to those of their owners. In my last cave house my bedroom was situated in what was once a stable. It had a one metre (three feet) diameter hole in the ceiling which rose six metres (eighteen feet) through the earth to the hillside above. This was once a feed chute which enabled previous residents to throw fodder down to the animals below. It also acted as a ventilation duct and no doubt served to let some of the smell out!

Now, I will agree that a large hole in your bedroom ceiling may not be everyone's cup of tea, but features like this are cave house chic. The tunnel now leads to a neat window above and subtle lighting turns an eyesore into another quirky feature. That's the thing I like about reforming a cave house, with a little imagination and some effort your can turn the things around you into useful character enhancing features. For example, my bedroom also had two mangers carved into the wall which have now been converted into useful niches.

Traditional cave houses often contain useful items that the amateur or professional cave house restorer can use to their advantage. There are rustic farm implements that can be cleaned up and turned into objet d'art to enhance living spaces. (These items are sought after by both Spanish and foreign residents on the coast and prices are rising.) I have seen traditional bread ovens turned into pantries, room extensions and, er, bread ovens! Although, these days a functioning oven is more likely to be used for making delicious pizzas.

When reforming a cave house, experts agree, that it must be able to "breathe". This means that it must be well ventilated and also that the walls are given a porous or "breathable" coating. Traditionally, this was "cal viva", a lime wash that bubbles ferociously when mixed with boiling water and is still sold locally in local builder' merchants.

Cave houses are so well insulated by the compacted earth around them that they are usually said to maintain an average year round temperature of 18-20 degrees C (64-68F). Personally, I have found that temperature variation can be some degrees wider than this. It depends on the orientation of the property among other factors.

I have also found that a nice warm fire is a must on a cool winter evening. The chimneys of the inner rooms of cave houses are vertical hand-cut tunnels which lead out to the hillside above. Over the years, I've experimented with every type of fire available, from the traditional open fire (over which all the household cooking was done in days gone by), to the modern wood pellet burning stove. Some people swear by the old-fashioned looking, rather ugly almond shell burning stoves that are still available in these parts. In truth, they are cheap to run and give out a formidable amount of heat. My heater of choice, however, for reasons I won't go into now, is the (also ugly), cheap to buy, steel drum stove which I call an "Artoo" (because it looks vaguely like the Star Wars character R2D2). Most latter-day cave dwellers prefer glass fronted wood burning stoves which give a cave room a warm and cosy ambiance. Some cave owners I have spoken to, however, say that their caves are so well insulated that even on the coldest evening they hardly need to heat them at all!

One thing that nearly every everyone agrees on is that a cave house is a great place to be during the long hot summer. It's like living in permanent air-conditioning and it is great to snuggle down under a light duvet at night when the temperature has been in the mid 30'sC (90'sF) all day! People are now so familiar with both hobbits and their houses that comparisons with cave houses are inevitable. Hobbits were small folk and, so too it would appear, were the cave dwellers of old (minus the furry feet, I believe). I often feel like Gandalf in the movie when I visit some unreformed cave houses. I have to keep ducking under low passage ways and doors. The good news is that modernised cave houses almost always have normal sized doors and ceilings. In fact, if they are well ventilated and well lit, their white washed walls give them a spacious and airy ambiance.

If the new owner of an unreformed cave house wants a higher ceiling and is going to do the work him or herself, then I’m told that for safety’s sake it’s most important to lower the floor, not raise the ceiling!

Many modern cave house owners, myself included, prefer their caves to look more like natural caves. They want irregular chambers with uneven walls and passageways all of which, when white-washed, add to the quirky nature of the property. Some even prefer to be able to see the chisel and pick marks left on the walls by the original constructors. Traditionally, it would appear that the builders tried to smooth out all the irregularities and many properties have rooms that are shaped like the inside of a railway carriage or tunnel. Many owners still prefer it that way.

Living in a Cave

Do you think that you would like to live in a cave house?

If you fancy becoming a 21st. Century troglodyte, there are some amazing cave house bargains to be found because of the ongoing sluggishness in the Spanish property market. You may, of course, prefer to vacation in one and discover more about this fascinating area. Andalucia, incidentally, was recently listed no.1 in an article entitled “The World’s Best Places to Live” in the UK’s prestigious “Daily Telegraph”.

I Welcome any Comments