The Top Ten Museums in London

Do you know which are the most popular museums in London?

London's Museums are some of the top visitor attractions in the UK.

This a compendium of information about the top museums and galleries in London, based on monthly visitor numbers.

This is the side entrance in Atterbury Street - opposite the Chelsea College of Art & Design. Millbank and the River Thames is at the end of the road

Tate Britain is the 'senior partner' having been around the longest plus it is the home of the Turner Collection. The museum focuses on British artists - past and present - and art by artists who lived in Britain for a long time. The Turner Prize exhibition is always located at Tate Britain.

However Tate Modern is more central and gets the larger number of visitors for its collections of international contemporary and modern art post 1900.

Both Museums are located right next to the River Thames and are connected by the Tate Riiver Boat. It's perfectly feasible to walk between the two - I've done it!

BOTH MUSEUMS ARE FREE TO ENTER although there may be charge to enter temporary exhibitions.

London
Paperback: 240 pages Publisher: Thames & Hudson (April 2011) I've got a copy of this guide and I think it's quite possibly the best one I've yet seen covering art in London. It also has excellent maps of where all the museums and galleries are and includes some which often don't get featured in some of the more "popular" guides. This is a fully illustrated guide to the riches of over 100 of London's museums and galleries. It focuses on the best in the city's collections to create an easily navigable, narrative history of art. The guides unique approach allows you to locate your favourite artist or style of art in any museum and follow this throughout the museums of London.
Buy Now

The British Museum is a national museum of global importance. Its collection of seven million objects provide a record of the art and artefacts of different human cultures across the world.

The Museum has a clear focus on its attraction for international visitors and people who live all over the world. It promotes the sharing of features of national identity across the world and ensures its celebrated collection can be accessed by and used by citizens of the world. It lends objects and shares expertise across the country to make a reality of universal cultural entitlement.

"In no other museum can the visitor see so clearly the history of what it is to be human."

The Museum has more or less continuously expanded and changed shape and configuration since it started! The museum was founded by Sir Hans Sloane in 1753. It moved to its current site in Great Russell Street in 1759. There have been major building programmes throughout its history. The British Library - which used to focus on the Round Reading Room - finally moved to a separate site in 1997.

The Reading Room at the British Museum has, in the past, been used by a large number of famous figures, including notably

Entry to the British Museums is FREE. There is a charge to enter some temporary exhibitions. 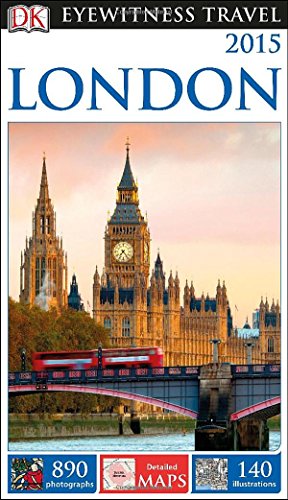 DK Eyewitness Travel Guide: London
Dorling Kindersley publish my preferred travel guides with excellent graphics as well as reliable information about areas and key locations. If I have to take one guide with me when I'm travelling then their guide is the one I take. London has a lot of ace museums and it's no surprise that these are all well covered by this book. What I really like about these guides in relation to Museums is you really get a sense of how big the Museum is and where things are due to the use of the cutaway diagrams. Rated an average of 4.5 out of 5 stars on Amazon by 43 reviewers. Series: EYEWITNESS TRAVEL GUIDE Paperback: 440 pages Publisher: DK Travel; (September 15, 2014)
Buy Now

I think the National Gallery is a must see if you come to London - even if all you do is climb the steps at the main entrance and look out at Trafalgar square and down Whitehall to parliament. It's an iconic view

I do high speed tours of the National Gallery for people who come to visit London and me. However it's very easy to spend a complete day here as there are a colossal number of fine works of art in the collection and on display (when they're not travelling the world).

You'll often find there are a lot more people in the National Gallery than you might expect. The very popular - and crowded - galleries are those housing the nineteenth century British (Turner. Constable, Gainsborough etc) and European art (Monet, Van Gogh, Cezanne and the rest).

They do a good programme of courses, lectures and workshops - you need to move fast to book up for some of them.

The food is pretty good too and you have a choice of three separate venues within the building. My preference is for a table in the corner of the National Dining Rooms overlooking Trafalgar Square with Eton Mess for dessert.

The Art Museum
Hardcover: 992 pages Publisher: Phaidon Press (October 17, 2011) Amazon reviews: 4.3 out of 5 stars (15 customer reviews) | Like (36) The first time I saw this book I had a good look at it. Which is not easy as it's the biggest and heaviest art book I've ever handled. Its huge size also makes it hugely expensive - however it is quite unlike any other book about the works of art in museums that you have ever seen before. Anyway, the upshot is that my other half bought it for my Christmas Present - and it now resides on its side on my art library bookshelves - it's afr too tall to stand up! "This revolutionary and unprecedented virtual art museum in a book, features 1,000 oversized pages of over 2,700 works of art. It is the most comprehensive and visually spectacular history of world art ever published." The book took ten years to put together. It's designed to be accessible and valued by both experts and people new to art. That's once they've found a method for reading the book given its size and weight!
Buy Now

The Natural History Museum is a branch of the British Museum. It originally moved to South Kensington in 1881 and houses all the natural history collections generated by original voyages of discovery. Its current mission is to maintain and develop its collections, and use them to promote the discovery, understanding, responsible use and enjoyment of the natural world.

This museum has seen an incredible expansion in visitor numbers in recent years - coupled with a significant development programme for its internal structure - which now includes the 8 storey cocoon shaped Darwin centre which opened in 2009 and now houses the 20 million plant and insect specimens.

The museum also has a rather splendid dinosaur in its main entrance hall.

Natural History on the Museum's Exterior

The Victoria and Albert Museum is located at Cromwell Road, London SW7 2RL

The V&A is probably the greatest museum of decorative art and design in the world. It has over 3,000 years worth of artefacts from many of the world's richest cultures and over 1,000,000 works. The purpose of the Victoria and Albert Museum is to enable everyone to enjoy its collections, explore the cultures that created them and to inspire those who shape contemporary design.

It's been enjoying a significant increase in visitors in the last couple of years.

The tunnel entrance to the V&A is open from 10.00 - 17.30 daily but may be closed, on occasion, on the advice of London Underground.

The Science Museum was founded in 1857 as part of the South Kensington Museum. In 1909 it gained its independence. It's now renowned as the home to a number of famous items such as Stephenson's original Rocket locomotive, Babbage's Difference Engine No. 1 and Crick and Watson's DNA model. The Science Museum has over 300,000 objects in its care, with particular strengths in the history of western science, engineering technology and medicine since 1700.

Entry is FREE, but charges apply for the IMAX 3D Cinema, simulators and some special exhibitions.

The National Portrait Gallery has to be one of the best if not the best portrait gallery in the world, in terms of breadth and depth of the collection. The Gallery holds the most extensive collection of portraits in the world. It aims to promote the medium of portraiture which today focuses on photography as well as painting. Sculpture tends to come a poor third behind these two.

Last admission to paying exhibitions is either 45 minutes or 1 hour before the Gallery closes.

The Museum is located in Greenwich, a short walk from the Cutty Sark DLR, local bus stops and Maze Hill and Greenwich stations. The Royal Observatory and Planetarium are in Greenwich Park.

ENTRY IS FREE (there is a charge for temporary exhibitions)

Other Museums in London

News about Museums in London