A Guide to Maine Humor

A self-deprecating view of life and the people of this Northern New England State. As a transplanted "Mainer" I think that I am in a good position to enjoy the uniqueness and rich simplicity of this style of humor - especially, when, as a "flatlander,""from away," I may be the target of some of it!

There are many funny and unique things about Maine and Mainers, most notably their unusual, regional accent. The humor is often quite simple and straight-forward and reveals an inner wisdom with historical roots going back generations.

Yes, I love Maine Humor, cause it's "wicked funny!"

The Isle of Squid

Up The Faya (at the fair)

I just love this video, because it's pretty typical of some of the old time Mainers. I think the accents and odd, simplicity of these characters makes them both charming and memorable - not to mention Funny! Actually reminds me of some of my neighbors.....Enjoy this classic!

Genuine Maine Icons. The WICKED GOOD BAND has achieved cult status in Maine and are the acknowledged masters of Maine musical satire.

The band has been performing in front of Maine audiences since its members were in a high school jug band at Deering High. They've played at concerts, festivals, and events all over Maine, and in such foreign lands as New Hampshire and Washington, DC. They have appeared on national TV and local cable access. Their bestseller book is often found at yard sales and in rustic bathrooms.

Catch their next live performance at the annual Yarmouth Clam Festival 2008 on Sunday, July 20th at 1 PM, at the North Yarmouth Academy Stage.

To purchase "The Wicked Good Band" CD's and Tee Shirts:

Pardon me for a moment. I'm about to slip into a foreign dialect for this little review. Anyone not from Maine (or who doesn't have a sense of humor) should move along.

I was gettin' ready to go ta work this mornin' when I spied one a them theah cassette tapes on the kitchen countah. The label said it was "Wicked Good." And, acourse, you know me, if it ain't nailed down to a cement block, I'm just liable ta pick it up an' check her out. You nevah know. Might be somethin' interestin'. Maybe one a them theah self-help tapes what'll raise your IQ whilst you sleep. I sez to myself, "Wouldn't that be nice. Ayuh. I oughta try somethin' like that out, don'tcha know."

Turns out it were a tape of a record alblum from 1985 - back when they was still called "alblums" - by some group a yahoos called The Wicked Good Band. I seem ta recall that theah group was pretty dahn decent, so I shoved it in the tape playah and give it a listen. Tweren't half bad, considerin'.

And our romance, too, it's wicked good

She went out swimmin' with my brother Tom

The sad 'n' sappy "Half Live at the Half Moon" was followed by the theme song to "So You Think You Know Maine" (a quiz show on PBS back then). Next, they tried out a "Scratch 'N' Sniff" idea, promotin' the smells of Maine. I particularly liked their reaction to the Rumford paper mill ("Godfrey! Who cut the cheese?"). A little ditty about sellin' "Tacky Trinkets" to the tourists came next (a rhinestone-studded lobstah trap sounds wicked sharp to me). And they followed up with a barnyard animal version of "So You Think You Know Maine".

Then came the piece of resistance: "Road Kill"

I know what you're sayin'. You're sayin', "Lestah! That's just sick!! Besides, what'll them PETA folks think?" Well, ta hell with 'em! I think it's wicked funny:

I like drivin' in the country, squishin' critters on the grill

Bashin' beasties in my Blazer is a wicked decent thrill

After that, I didn't expect much of anything, but "Kathadin Jeans" (a smarmy commercial from a guy named Pierre Kathadin) and "Ayuh, The Potato Pickin' Song" (to the tune of Harry Belafonte's "Jamaica Farewell" - "Ayuh! I said Ayyyyuhh! Gettin' dark an' me wanna go home") had tears rollin' down my cheeks like the time when Aunt Ethel from Bethel sat on my pet cat Fluffy.

Overall, I'd have to say that these Wicked Good fellahs were wicked decent, wicked sharp, wicked cunnin' and just plain wicked good.

An Overview of the Funniest Man in Maine

Tim Sample is considered Maine's most famous comedian and humorist. He is renown for both his performances and his authentic Maine accent. The following is a list of his accomplishments to date.

-He has sold well over a million copies of his books, albums and videos (including 4 albums and one video he did for the Bert and I Company).

-Was recruited by Charles Kuralt in 1993 as a correspondent for the Emmy Award Winning TV Show, CBS News Sunday Morning. Over the next 11 years he created and produced over 100 "Post Cards from Maine" segments, which introduced millions of CBS viewers around the world to the Maine Lifestyle.

-Born and raised in Maine, Tim has never lived anywhere else.

-Tim's first comedy album was produced in 1979 by Noel "Paul" Stokey, of the singing group, Peter, "Paul" and Mary.

- Following the death of Marshall Dodge, in 1982, Tim worked with Dodge's comedy partner Rev. Robert Bryan and completed 4 albums and a video for the Bert and I Company.

-Sample and Bryan have also collaborated on several TV specials, the popular recording, "How to Talk Yankee", and TV Specials, "Out of Season" and "Maine Humor Behind the Barn."

-Tim Sample has also written and illustrated several books, including "How to Talk Yankee" and "Saturday Night at Moody's Diner"

-He has made TV guest appearances on such shows as the Today Show and Good Morning America.

-He has narrated several films and books on tape, including Robert Mcloskey's childrens classic, Bert Dow Deep Water Man and Stephen Kings,The Sun Dog. Tim released his first 2 DVDs in 2006, "Tim Sample 2006", recorded live at the Bangor Opera House" and "Back in the Day" remastered performances from 1983 and 1985. 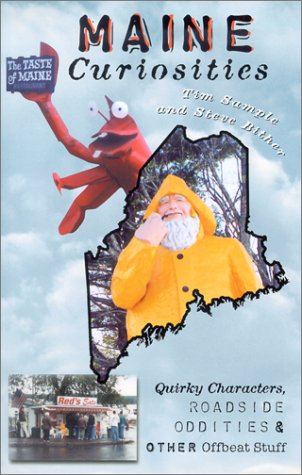 You Can Make a Lens of Your Favorite Things in Life Too!

You have some great ideas to share, or a favorite movie, book, hobby. Maybe you would like to salute a favorite person in your life or share a favorite recipe.

What are you waiting for? It won't cost you a penny and could earn you some cash, not to mention friends and possibly even fame. Don't forget your favorite cause or charity either.

Squidoo makes it all so easy, it's like a window to the internet and the whole world awaits you!

Please Leave Some Comments ... - Thanks for Visiting!