Guide to Seeing the Northern Lights in Tromso, Norway

Susana has traveled to Scandinavia on many occasions but the highlight has been her trip to Tromso, Norway

Welcome to the definitive guide to seeing the northern lights in the beautiful and uplifting Paris of the North - Tromsø, Norway. Discover everything you need to know for your trip of a lifetime including what time of year is best to catch the aurora, what clothes to take, how the moon phases will dictate when to go, how much money you'll need and how to get there.

The northern lights are visible in much of northern Scandinavia - Sweden, Finland and Norway, and Tromsø is by far the most popular - for a variety of very good reasons.Tromsø in northern Norway is one of the easiest places to get to to see the northern lights and it's smack bang in the middle of the aurora belt. That's why I chose Tromsø as the place to visit to see the aurora and why I would highly recommend it to anyone else who wants to see them.

The Low Down on Tromsø, Norway

If you're considering visiting Tromsø to see the Northern Lights, then there are many considerations to take into account. Luckily, they are all explained right here! This is what you'll find out about if you keep reading.

Tromsø, Norway is in the Aurora Belt

The aurora belt follows the circle of the magnetic north pole. You are more likely to see the northern lights in one of these locations than anywhere else in the northern hemisphere.

Tromsø is located in the arctic circle and is often referred to as the gateway to the arctic because it's where most polar expeditions start from. The best months to see the northern lights in Tromsø are October, February and March.

I went at the very beginning of March making sure to avoid the full moon. Ideally you want to plan your trip as close to a new moon as you can so that the night sky is as dark as possible. Click here to check out the lunar cycle for any given month in any year. Lunar cycles.

The best times of day to catch the aurora are between 10pm - 2am, so make sure you are outside with your head up at this time of day!

Getting to Tromsø from the UK is easier than ever now that Norwegian Airlines fly directly from London, Stansted to Tromsø, but only at particular times of the year. At other times, you can fly to Oslo Gardemoen, and then catch a connecting flight to Tromso.

If you're thinking of flying with Ryan Air be aware that they fly to Oslo Torp airport which is about 100km from the main Oslo airport (Gardemoen) and you would need to get between the airports to fly on to Tromsø.

SAS - If you're coming from Australia, America, Canada, Spain, France, India, Hong Kong, Japan or the Far East then you will more than likely be taking an SAS flight to Oslo Gardemoen and then hopping on a connecting flight with Wideroe to Tromsø.

There are other options such as flying into Oslo Gardemoen then getting on a train or bus to Tromsø. Both are quite expensive and it is a lot quicker and cheaper to fly within Norway.

Tromsø on the Map 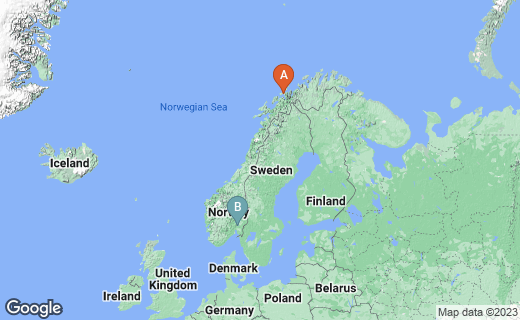 Surprisingly, winter in Tromsø is not especially cold. The record low temperature in Tromsø is minus 18 degres Celsius, whilst the average January temperature is minus 4 degres Celsius. The relatively mild winter is perfect for outdoor activities. When I went in March there was still tons of snow and aside from star gazing we had lots of fun in the day cross country skiing and dog sledding across the unspoilt and picturesque country side.

Tromsø has a fantastic network of cross country skiing routes across the town and the locals use them to get about as well as to have some family fun. On Sundays the routes are filled with families skiing together. Many of the four year olds put my own skiing abilities to shame. While you are there you can hire cross country skis (ask at the tourist information center) or if you decide to stay at the B&B I stayed at (Anemone), the owner is more than happy to lend you some of his skis for a small hire fee.

The dog sledding tours are something I would really recommend you try. Sledding across the open countryside was one of the best experiences of my life! It's well worth taking the option to drive your own sled and dogs rather than sitting on the back while someone else does the driving. It didn't take long to master the technique (about 10 minutes) and there was such a sense of exhilleration while I was flying along the crisp white snow with the dogs.

Clothes for the Arctic

I would recommend packing the following:

One thing that's quite strange is that the snow on the ground is not wet. There were several times I ended up, up to my waist in snow and once you manage to climb out, after a really good giggle, you're not wet at all.

What Makes the Color of the Aurora?

The composition and density of the atmosphere and the altitude of the aurora determine the possible light emissions.

Oxygen atoms, for example, strongly emit photons in two typical colors: green and red. The red is a brownish red that is at the limit of what the human eye can see, and although the red auroral emission is often very bright, we can barely see it.

Photographic film has a different sensitivity to colors than the eye, therefore you often see more red aurora on photos than with the unaided eye. Since there is more atomic oxygen at high altitudes, the red aurora tends to be on top of the regular green aurora. The colors that we see are a mixture of all the auroral emissions. Just like the white sunlight is a mixture of the colors of the rainbow, the aurora is a mixture of colors. The overall impression is a greenish-whitish glow. Very intense aurora gets a purple edge at the bottom. The purple is a mixture of blue and red emissions from nitrogen molecules.

Solar weather rotates on an approxiamtely 11 year cycle and 2012 is due to be the next solar maximum. This when sunspot activity and coronal flares are at their peak. Since the northern lights are created by particles thrown off of the suns surface the aurora will be more plentiful at the solar maximum but they can still be seen at other times. I went in 2007 which was the solar minimum and I still got a great display!

I am not a photographer so I don't know the ins and outs of how to capture the aurora on film. I know I didn't manage to get any good photos of the aurora I saw. Here's a link which explains how to do it.

How Much Does Norway Cost?

Norway is pretty expensive, but I wouldn't let that put you off - it is an amazing place and well worth the expense. A burger king for two cost me around £15 - $23 USD (we had planned on a nice meal but couldn't afford it!), a glass of wine is around £8 (needless to say I didn't drink any alcohol during my stay), two days basic food shopping was £45 - $70. I would say you need a minimum of 450 Norweigan Kroner per person per day just for bus fares, taxi fares, refreshments and basic meals.

On top of that you obviously have your accommodation costs, flights and any activities you want to do.

Here's the currency converter so that you can work out how much your stay in Norway will cost you.

When Are You Planning Your Trip to See the Aurora Borealis?

My Journey to Tromsø, Norway

Seeing the Aurora Borealis or Northern Lights was one of my lifetime ambitions and two years ago it was a dream that was finally realised.

I took my daughter to Tromsø, Norway, which is one of the best places in the world to see the northern lights.

The 5 day trip to Tromsø was more magical and spectacular than I could ever have hoped for.

It's a trip I know I will do again and again. Once you've seen the aurora you will be caught in their spell just like I have been.

It's very hard to impart the strange awe and wonder that the Aurora Borealis inspire in oneself - it's a magical display that is far beyond words. Watch the video below to get a really good idea of what they look like.

Whenever you're planning to visit Tromsø Norway and catch a glimpse of the aurora borealis, I wish you luck and a magical trip!