What is an English Village?

A village is a small settlement, larger than a hamlet and smaller than a town. It will have grown up around an activity, which is usually farming, but of course you can find fishing villages, mining villages, and so on.

A village, unlike a hamlet, will have a church. It will not have a town hall or mayor.

Over time it will have had a school, generally attached to the church, a shop, a pub (public house) a post office and a blacksmith. And over time, many of these have once again disappeared.

The village I'm going to show you has retained its church and school but all the others have gone. That is to say, they did all shut down but recently community efforts have re-opened the shop and post office. This will hopefully prevent the village from becoming merely a dormitory for local large towns and cities.

There is something special about English villages

When we were younger we moved house many times, in various different parts of England. For the most part we stayed no more than 3 years in one place, until we found ourselves in a village in southern England. We stayed there for 15 years.

I really was very sad when the time came for us to leave and never wanted to visit, that is, until I knew we would be leaving the area entirely. I returned to take some pictures to remind me of that lovely village.

The picture here is one I took of my favourite tree in the nearby woods where I used to take the dog for walks. Like all the other photos in this article, it is my own work. 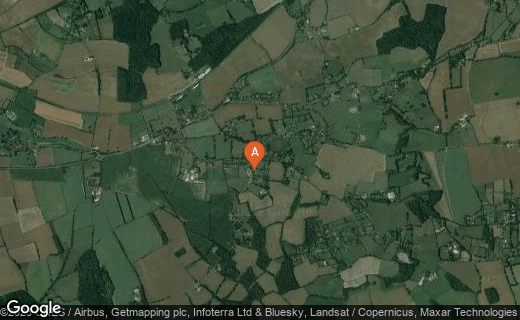 The road through the village was called Church Street. As you can see, there were no pavements or sidewalks. This was a deliberate policy in recent years to try to maintain the rural nature of the village.

There were heated debates when they decided to paint road markings on some of the roads, and place speed limit signs. It had to be done though, because unfortunately not everyone respected the old ways. This road became congested twice a day during school terms when parents dropped off and picked up their children from the village primary school.

Again, on Sundays when there was a church service, people would park all over the place. It is a very narrow road and if farm vehicles had to pass that way, there could be trouble, and often there was.

The village was mentioned in the Domesday Book of 1068, William the Conqueror's survey of his new possessions, and the church was built at around the that time.

The bell tower has six bells with bell practice every Thursday. I used to love the sound of the practice sessions echoing across the fields. I might have been less thrilled if I'd been a closer neighbour.

Updated: on 19 June 2014 a fire broke out in this beautiful church. Most of it is now sadly destroyed.

There is a yew tree here which is reputed to be 700 years old. It's starting to look the worse for wear and needing some propping up, though I feel sure at that age it deserves all the help it can get.

It was the custom for the churchwarden to plant yew trees because yew wood was used to make bows. Each village was expected to provide archers and bows in the service of the overlord. there is also a myth/legend, call it what you will, that suggests that when the first Christians came to this land, they sheltered under yew trees until they built churches.

You can see, too, the lych gate beyond and to the left. The lych gate was where once the coffin was rested while the clergyman started the service of burial. In early days people didn't have coffins and would often be buried in a shroud. This is a very simple lych gate but they can come in many forms.

Both my sons attended this school which is now mostly hidden by trees. You can see the grass verges on either side of the entrance very clearly.

It served ages from 4 up to 11 years old, with a total of 160 children. Because it was so small, there were only 5 classes (plus an entry class for the youngest) with mixed age groups, and everyone knew everyone else. It may not have the facilities of some much larger town schools but it has a chestnut tree outside to provide conkers for the conker season, and unlimited opportunities for nature study.

It was, and is, at the heart of the community.

Many village ponds are the result of material being dug up to make bricks. I have no idea whether that applies to this particular pond or not. It is big enough for someone to have introduced fish into it and now only members of the fishing club can fish there. It seems a shame because it used to be popular with children who had a stick, a length of line and a hook probably made from a pin. It's still a popular area for mothers and children to walk and have picnics.

If ever I lost our dog, the first place I'd check was the pond. She had a good line in plaintive looks, trying to persuade picnickers and fishermen that she hadn't been fed for a week, and could they possibly spare a sandwich? A bite? A crumb?

Many of the buildings in the village are Grade II listed, meaning they are protected from indiscriminate alterations. This one shown here is the Archbishop's Cottage, so named because it was where Archbishop Howley once lived, who crowned both William IV, and later Queen Victoria.

It is built of brick and flint like many houses and walls in the area, and is thatched. Traditionally it would have been thatched in long straw which gives a softer and somewhat shaggier effect. This roof has a protective wire mesh covering and that suggests it's thatched in wheat reed. Wheat reed lasts considerably longer than long straw, approximately 40 years as opposed to 25.

Water reed, or Norfolk reed, gives a more angular appearance to the roof but lasts longer still, up to 70 years. Because it is so much more stiff than wheat reed, it doesn't need the protection of wire mesh covering. In theory at least, the birds can't pull out the stalks. I have seen with my own eyes that this isn't always true.

Thatching is very skilled work and if you need your roof re-thatched, you need to book well in advance with a master thatcher. It isn't just the thatcher's time that is required but he also has to source the materials, very often in Europe. Ours came from France but it can come from much further afield. Each master thatcher has his own "signature" style to the roof ridge.

There is some very old woodland on the edge of the village where I used to love walking, ending up always near my tree shown at the very beginning of this article.

I used to go there during every season. Even in winter it was a delight because the bare trees and bushes revealed more of the wildlife. Then in the spring it would erupt into a sea of bluebells, the summer brought foxgloves, and the autumn gave us elderberries and blackberries, sweet chestnuts, hazelnuts, and the all important conkers.

It was a place of peace and plenty where you could feel nature all around you.

I hope you enjoyed this rapid tour