Take A Power Nap Anywhere With The Genuine Ostrich Pillow

You Can Take a Power Nap Anywhere

The Ostrich Pillow - Is cross between a pillow, and a hoodie. It doesn't matter whether you are a power napper or a recluse, the Ostrich Pillow will allow you to, at least momentarily, escape the rat race by sticking your head in a hole virtually anywhere.

Kawamura-Ganjavian- an architecture and design studio (I guess if you add design studio to your business name you can make pillows when the architecture business is slow) has designed a pillow that instead of lying your head on top of, you stick your head into, much like the way an Ostrich sticks its head into the ground. Hence the name Ostrich Pillow. This revolutionary concept was designed for taking private naps virtually anywhere.

According to the inventors:

"OSTRICH PILLOW offers a micro environment in which to take a comfortable power nap in the office, travelling or wherever you want."

One up for humankind... the Ostrich has to find a hole to stick it's head into, but with the invention of the Ostrich Pillow you can actually carry your hole with you... Or I suppose you could carry a shovel too. Your choice, but the Ostrich Pillow looks so much more comfortable. The Ostrich Pillow is being funded through the Kickstarter program, and seems to be on track to meet it's goal.

Image Credit: Clipped from Page Screen of You Tube video by studiobannanathings 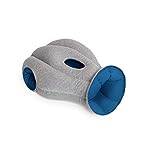 I'm pretty excited about the Ostrich Pillow. It brings back memories. Sometime during the last century, when I was in school, we would have study hall sessions as class electives. I guess the intent was for us kids to study, but in reality this was a great place to make up for the lost sleep endured by having to wake up and trek off to school each morning.

So picture about half of the study hall with their sweaters, coats, hoodiess or t-shirts pulled up over their heads and their hands tucked under their chins... the picture your envisioning is similar to someone using the Ostrich Pillow on a desktop or table, isn't it?

Well I don't have any kids in school so I can't say study hall even exists anymore, but if it does this would be the perfect study aid to bring in with you. Er, um... Sorry Mom's and Dad's, what I meant to say was: "Kids bring your school books with you so you can study hard".

Why Do Ostriches Stick Their Heads In The Sand ?

So a little quick reading tells me that an adult Ostrich can weigh between 150 and 250 pounds, that they are native to Africa, and that their land speeds are the fastest of all birds, in fact the fastest of all two legged creatures at over 43 miles per hour. What I'm not table to find is why the Ostrich sticks its head in a hole and that is of course because they do not.

Apparently it's a myth that the Ostrich will stick it's head in a hole when it feels it is danger. Several web views suggest the myth probably originated with Pliny the Elder (AD 23-79), who is said to have written about Ostriches; "when they have thrust their head and neck into a bush, that the whole of their body is concealed."

Ostriches will also lay flat to the ground when in danger to conceal themselves from predators such as lions. When they are performing this activity, they well may look as if their heads are buried. Image Credit - Freeclipart.com

The production and distribution of the first Ostrich Pillows is being developed through funds made available at Kickstarter.com . Kickstarter bills their site as a "Funding Platform for Creative Projects".

These aren't loans, but you may get a first or limited edition of the project or some other incentive from the creative person or group for helping in funding the project. According to the Kickstarter site they have successfully launched more than 24,000 projects since "2009 and "2012"

If you're inclined to do so, don your Angel wings and head over to Kickstarter.com to get the skinny on what unique web site is all about.

Ostrich Pillow Amazon Reviews There are some good and some not so good. Reading the amazon reviews it seems that there could already be many knockoffs of this original ideas coming out of Asia. My response is that the folks at Studio Banana Things )originator of the ostrich pillow) need to get product to market ASAP and that includes offering Ostrich Sleep Pillow at Amazon.

I realize getting these knockoffs out of the marketplace is important, but if the real thing isn't available soon, what's the point? Regardless, it's a shame that some unscrupulous folks are resorting to outright stealing this great product idea from Banana Studio Things and it seems even using their photos to promote it. Some Companies obviously have no values. I'll guess these same morals represent how much they care about product quality and customer service?

Granted the unauthorized versions are selling for a fraction of the originals, but is the quality the same. Check here for Ostrich Pillow Amazon Reviews

The Slanket And The Ostrich Pillow A Great Combination

Can Napping get any better than this combination; The Slanket "The Original Blanket With Sleeves" and the Ostrich Pillow. You can literally hibernate in a fleece comfort. Even if your laying back on the couch for a quickie nap, there should be no question that you are not to be disturbed.

What Do You Think About Taking Power Naps Almost Anywhere.