A Shingle Beach, a Sea Defence

A Walk Along the Special Environment of a Shingle Beach

Ours is not just any sort of seaside because ours is a shingle beach which means a beach made up of rounded pebbles. It is a special environment, and it protects us. There are many fascinating facts about these very special places.

A walk along our beach

I want to take you on a walk along our beach-without-sand and see all the reasons why I consider myself to be very lucky to live here beside it. It never fails to interest, amuse and refresh me. We can watch ships and boats, we can go beach combing, walk along the pier, have picnics, go fishing if we happen to want to. It can even be educational - but don't tell anyone.

Let's go through the garden gate (please remember to close it after you) and turn left. We could just as easily turn right but I want to take you past the castle. You wouldn't normally associate a castle with the seashore, I know, but this castle has guarded this section of the coast ever since Henry VIII had it built for that very purpose. It did suffer a bombing, in 1941, during the Second World War but it survived and there was no invasion. In fact that bombing did it something of a favour because the modern extensions were destroyed and restoration took it back to a more authentic state.

So let's continue our walk

A sharp right turn takes you to the sea and the first thing you notice - no sand. We have a shingle beach, that is, it's covered in smooth stones and pebbles. You'll find seasides like this all around the UK, especially along the south coast but elsewhere in the world they are relatively rare. I'll tell you about why they are special later on, but for now, you'll notice that they aren't so easy to walk along. Keeps you fit though!

I've heard it said that some tourist publicity has exchanged a picture of sand for the pebbles in their pictures but I personally like it the way it is. Stones don't get tramped back home in the same way that sand does.

We have a small fishing fleet based here - the boats are winched right up on the steeply shelving bank of stones. If you are lucky, they will be off-loading their catch as we pass and you can buy the freshest possible fish directly from the fishermen.

Some of my photos of our seashore and surroundings follow.

Where we are in England 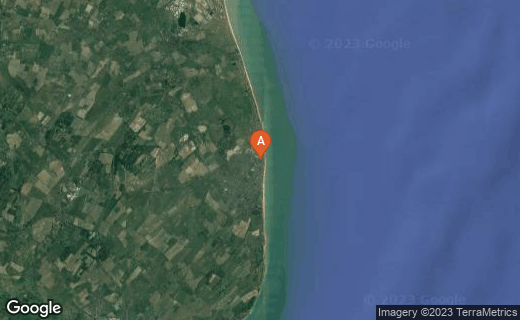 Position on the coast

Why is this sort of beach special?

People, English Nature in particular, have described stretches of shingle as stony deserts. Vegetated shingle beaches, those that have plants growing on them, are really quite rare. As a result they are often given the status as Sites of Special Scientific Interest (SSSI for short!).

The plants that can grow on these pebbles are specially adapted to dry and salty conditions which other plants couldn't tolerate. When some plants start growing in the area, later on other plants arrive and colonise too. They become home to rare species of insects and plants and birds. You can see some of the early arrival plants behind the picnickers by the sea. It's too far away to see definitely but I'm guessing it's sea sandwort.

Sea sandwort, like most of these plants, has deep roots and the plant disappears completely during the winter. Also like many, it is edible. They say people survived the drought of 1555 by living off sea pea. Sea-kale is another of the edible species. See the Shingle Species Identification Guide (pdf) from Pevensey-bay.co.uk

I've never seen anyone picking any of these plants - I'm not even sure that it's legal to do so - but I have seen someone taking the fresh young shoots of wild fennel growing along the landward side of the coastal path. I believe, too, that you can find wild asparagus in some parts.

A final fact about this environment, one that makes it of special interest these days - it is a great sea defence. The waves push the pebbles up on the shore but then the sea water sinks down through them so the force of the waves is lost. You can see the effect of the waves pushing the stones along in something called longshore drift in one of my photos to come.

How is shingle formed?

The short answer is that the pebbles come from cliff erosion. As you can see in this photo, the cliffs around here are liable to collapse, due partly to the action of the sea and as the result of frosts.

A large amount of material falls into the sea but most of it is relatively soft and not very resistant to the waves and currents, so it is washed away. But there is a substantial amount of harder material too, which in this area is mainly flint. Flint comes in varying sizes from small fist-size pieces to much larger blocks the size of several house bricks.

The flints are too heavy to be washed far away by the sea but they are rolled around, knocked against each other, and gradually they become the smooth pebbles we see every day.

Shingle in the making

In some places you can find a small spit or promontory of chalk where you are able to see the erosion of the chalk around the flint which becomes detached and falls on to the beach or into the waves, there to be broken up and smoothed.

On sea defences and longshore drift

By 2012, longshore drift had washed large quantities of pebbles along the coast and left some parts of our town vulnerable to the sea, so the powers that be decided we needed an extended sea wall and additional stones to bank up the shoreline. It took almost two winters to achieve the desired effect.

For months and months a dredger came to deliver a mixture of sand and stones which was pumped ashore.

The sand had to be removed from the pebbles (because, of course, our beach has no sand) and the remainder spread over the whole area. The sand was taken away, we know not where. Some say it was used on golf courses; some say it was offered to builders' merchants but refused because of the salt content; and some say it was used to make sandbags for flooding defence. The last is undoubtedly possible: certain parts of this country needed a lot of sandbags in the last winter's flooding.

At Eastbourne further along the coast.

Eastbourne has a very similar seafront with, admittedly a rather more impressive pier. Nevertheless, the procedure is the same and clearly someone else finds it as mesmerising as I did.

In the end we have our beach back and I wouldn't want to live anywhere else.