When I was a child growing up in eastern Massachusetts, our family always took a vacation day trip to Paragon Park and Nantasket Beach in Hull, Massachusetts. Nantasket Beach is still a popular ocean seashore destination for Boston area families, but when I was a kid it boasted a boardwalk and amusement park, restaurants and attractions plus clean sandy ocean beach swimming all located just south of the city. Today Nantasket and Hull have changed, but it's still a great family beach destination close to Boston.

Anyone who grew up near Boston from the Victorian era through the 1970s remembers Paragon Park and its wonderful amusements including The Giant Coaster and the flying horses of the carousel (PTC #85, manufactured by Philadelphia Toboggan Company which built carousels and wooden roller coasters) plus the cold Atlantic Ocean and boardwalk at Nantasket.

My parents grew up in the Boston area in the 1930s and 1940s. Although they loved trips to Cape Cod when it was still a long drive from the city, Revere and Nantasket Beach were the regional favorites for families and teens from the 1940s until the late 1970s and early 1980s.

Today the beach and boardwalk are still popular and busy as is the Paragon Carousel. The Giant Coaster has a new home and still provides thrilling gravity-challenging rides.

Back in the good old days Hull was a Hot Spot!

Today, Paragon Park and its amusement rides are mostly gone, developed into modern condominium units, but the historic carousel and clocktower still remain. The park's famed wooden roller coaster (The Giant Coaster) built in 1917 was removed from the park in 1985 and now operates as "The Wild One" at Six Flags America, Baltimore/Washington DC.

Nantasket Beach offers all the attractions of a seaside resort, easily accessible from the city of Boston and surrounding communities west and north of Boston. Modern highways can take you to the Cape and Islands further south but it's a much longer drive and Cape Cod, Nantucket and Martha's Vineyard are more crowded (and more expensive) than the south shore in the summertime. Nantasket is rated as one of the Top Ten Beaches in New England, and it's known as the closest clean beach to Boston.

A trip to Paragon Park on the south shore of metro Boston was the highlight of summer vacation for most kids growing up in Eastern Massachusetts from 1940 through the late 1970s. My parents would load six children into our family car and drive to Nantasket for a day's outing every summer. Even after our family moved away to the suburbs we still ventured back to Nantasket Beach for a day trip and family fun at Paragon Park every summer. This ritual ended only after we moved to New Hampshire, when Hampton Beach replaced Nantasket as our family summer beach vacation destination each year.

Paragon Park Back in the Day - Nantasket Beach - Hull Massachusetts

Paragon Park was an amusement park located on Nantasket Beach in Hull, Massachusetts. It closed in 1984.

Among the amusement rides in operation during Paragon Park's history was a traditional-style Philadelphia Toboggan Company carousel (PTC #85) with hand-crafted horses, a bumper cars ride known as "Auto Scooters", a Ferris wheel, a horror-themed dark ride called "Kooky Kastle", and a wooden roller coaster known as The Giant Coaster.

There was also a ski lift-type ride called the Sky Lark, an automobile-themed ride known as "Turnpike Cars" (replaced by a different ride in the 1970s called the "Indy 500"), and a water ride called "Bermuda Triangle" (formerly the "Congo Cruise," the "Jungle Ride," the "Red Mill", and the "Mill Rapids").

Today, the only surviving remnants of Paragon Park on the boardwalk are the historic Paragon Park Carousel and clock tower. The rest of the site is devoted to condominium development. The park's "Giant Coaster", built in 1917 and removed from the park in 1985, now operates as "The Wild One" at Six Flags America, Baltimore/Washington DC.

A small miniature golf course is located on one of the smaller sites that once housed a water slide, and previously a few rides. Dream Machine arcade is still in operation, as well as the historic "Fascination" game room. The remains of the "Turnpike Cars" roadway ride remain hidden in overgrowth beside the parking lot.

More rides that Paragon hosted over the years were the Trabant, the Tilt-a-Whirl, Galaxy Coaster, the Sky Diver, Paratrooper, Matterhorn, Himalaya, Round Up, Scrambler, Crazy Tea Cups, Twister Kiddie Coaster, Caterpillar, the Whip, Batman-slide, Super-slide, Salt and Pepper Shakers, Swing ride, along with many rides that were smaller versions of these, geared towards children.

Read more of this article about Paragon Park at Wikipedia.

One of the few remaining attractions of Paragon Park is the historic grand carousel located at 205 Nantasket Avenue Hull, Massachusetts 02045. The carousel and its building were relocated from the former park site to this address, and the wonderful wooden-animal carousel is still in operation daily from Memorial Day-Labor Day - 10am-10pm. The Paragon Carousel was added to the National Register of Historic Places in 1999.

As a child I loved horses and the carousel was (and still is) my favorite ride at Nantasket Beach. My parents rode the carousel as children; it was installed in 1928, number 85 of 89 carousel amusements crafted by Philadelphia Toboggan Company, renowned maker of hand-carved carousels.

Today, the Paragon Carousel is under historic restoration, and a non-profit fund has been created to raise money for its repair and continued operation.

FRIENDS OF THE PARAGON CAROUSEL

The Friends of the Paragon Carousel is a 501(c)3 federal tax-exempt non-profit organization.

The train station in Hull, England - Hull, Massachusetts' sister town for which the settlement took its name in 1644 - is called Paragon Station. Prior to the town's incorporation, the area was commonly known as the Nantasket Peninsula of Massachusetts.

The name "Nantasket" is from the native American Wampanoag language meaning "at the strait" or "low-tide place." The town of Hull encompasses a series of connected islands that form a peninsula; at low tide the beach area is wide and sandy with acres of tide pools.

Hull, Massachusetts is a small community situated along a peninsula of small linked sandy islands extending 7 sandy miles into Massachusetts Bay from the south. Along with its ocean beaches and plenty of sand for digging and making castles, Hull and Nantasket were famous for Paragon Park - an amusement park with plenty of family fun: rides, games, boardwalk and souvenirs galore.

Much like Coney Island in New York, Nantasket Beach and the community of Hull grew in the nineteenth century to become popular summer vacation playground resorts. Hull and Nantasket were an easy day trip or vacation destination for urban Boston residents seeking to escape summer's heat to spend a day, week or season at the shore in a family environment. Even if you didn't own an automobile, you could easily get to Nantasket from the city by way of public transportation.

Today, you still can take the commuter rail (the "T" as it's known in Massachusetts) or water taxi from Boston to Hull. 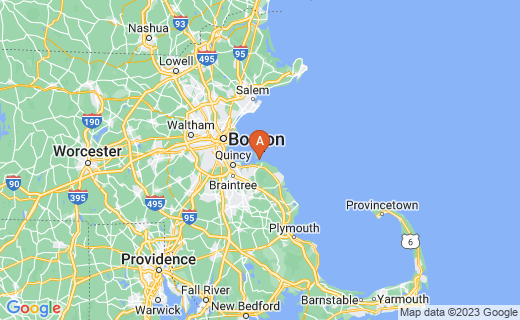 Hull and Nantasket are Close to Boston

"During the nineteenth century, a number of resort areas developed surrounding Boston to provide pleasure for its residents. In the late 1800s, Nantasket, or Hull, was known as the premier resort in New England, with the largest summer hotel in the nation.

With the advent of the automobile, the Boston metropolitan resorts lost favor to Cape Cod and northern New England. One by one, the merry-go-rounds disappeared by fire or sale. After a major fire at Paragon Park in Hull, a new large, elaborate carousel, PTC #85, was installed in 1928.

It was the 85th out of 89 carousels created by the Philadelphia Toboggan Company, renowned maker of hand-carved carousels in the Philadelphia, or realistic, style. (Toboggan meant roller coaster) PTC #85 included two rare Roman Chariots, each pulled by two horses, carved by the Dentzel Company, founder of the Philadelphia style, and purchased when the last of the Dentzels died. Its scalloped canopy was one of the most beautiful ever constructed for carousel.

The fabled Paragon Park with its sweeping roller coaster is long gone, but preservation efforts are underway to restore this grand carousel with its Wurlitzer Band Organ, Bell Tower, and 66 horses. There are many shops, restaurants and amusement arcades along the beach -- and of course, sand and surf! "

Nantasket Beach is probably the most famous location in Hull, Massachusetts. The once-thriving Paragon Park is now gone, but Hull is still a vacation destination within minutes of Boston. There are many beaches and attractions in Hull. Hiking and biking trails abound, and you're never far from the sea as you meander about the roads and byways in Hull, Massachusetts.

Fun Places to Go with Children in New England: 4th Edition, Over 500 Listings, Completely Revised & Updated
New England Family Fun with Kids Fun and kid-friendly day trips and attractions in New England Paragon Park is gone, but there are still thousands of wonderful family attractions and places to go in New England. This book offers many suggestions for the Boston area plus other regions of the state plus locations throughout New England.
Buy Now

Unless noted in the text, photographs and images used under Gnu and Creative Commons Licenses via Wikimedia public domain declarations.

Welcome Day Trippers and Vacationers - Please Sign the Guestbook! - Anyone can leave a comment here - all are welcome