People of Nepal: A Photographic Journal

Have you been to Nepal?

Nepal: A Colorful Mix of Cultures

The population of Nepal is a like a group of tribes -- known as castes -- who co-exist (though not always peacefully) and intermingle, but they are still very distinct. A melting pot it is not.

Included in the mix are three main ethnic groups and more than forty castes speaking over one hundred languages. There are also Tibetan refugees, Buddhist monks from all of the world, transplants and seasonal workers from India, and Western expats living full-time in the country.

Nepali people often wear colorful clothing and, to my Western eyes, are quite exotic. I was fascinated by the myriad of cultures and customs, often so different from my own.

I'm not a photographer per se, but I did get hooked on taking photos while I was in Nepal for three months. At first, I was very shy about taking pictures of people, but I gained confidence and, I dare say, some skill as time went on. The following are a handful of the hundreds of photos of the Nepali people I took during my stay. I hope you'll enjoy these images.

All photographs on this page are the property of Deb Kingsbury--that would be me--and may not be used for any purpose without permission. Feel free to contact me through my profile link if you'd like to use something here, and I'll most likely say yes, as long as credit and a link are given.

People of Nepal.... - A Holy Man (or is he?) at Boudha Stupa in Kathmandu, Nepal

This is a sadu or holy man. Or he appears to be, that is. I was told there are "fakes," who dress that way for better luck with panhandling. I can't say for sure if he was the real thing or not. Then again, to me, it didn't really matter.

An old Buddhist monk at Bouhda Stupa in Kathmandu.

Make that a nun? I've been corrected by someone who's actually spoken to this woman at the stupa on more than one occasion, finding her in the same spot a year later.

I took another photo of this person on a different day, wearing a bright blue, knit Nike cap. In that picture, she's sitting in the same place, wearing her robes and holding prayer beads exactly the same way.

This was also taken at Boudha Stupa in Kathmandu. I don't know what she was looking at or what her reaction means.

Two women, a baby, and a tailor in Thamel, Kathmandu, Nepal. I didn't see the person in shadow in the doorway when I took the picture.

Just beyond this quiet square, the street was filled with people,bicycles, mopeds, cars, dogs and even an occasional chicken.

I love this little girl's smile. I pointed to my camera, gesturing to ask her permission, and she smiled even wider.

I took this photo of the Nepali child while stuck in traffic. I was in a sweltering taxi, on the way to the airport in Kathmandu to fly to the smaller city of Pokhara. I didn't have much time to spare when I finally got to the airport.

Not an uncommon scene in Kathmandu, I'm afraid. This was taken at the temple Boudha Stupa.

I was told this man, like a number of others seen panhandling in the area, had leprosy, but I don't know if that was true.

Taken in Kathmandu. I assumed a parent or guardian was nearby, but I didn't see anyone obviously watching him.

A Nepali friend told me that it's not uncommon for parents to place their small children along the streets to panhandle (or just sit next to a dish to collect money), while Mom or Dad watches from nearby. Apparently, they want the children to appear to be orphans in order to gain sympathy ... and money. I did notice a little plate next to (to the right in the photo) this little boy, but there was nothing in it, so I'm not sure if that was for donations.

A man prays at Boudha Stupa. He would get up, gesture, take a step, lie down, and so forth, continuing around the stupa multiple times.

I saw this same type of worship going on even when the stupa was extremely crowded. People would just walk past or even step over those lying down.

A Nepali man and his prayer beads

I love this moment between friends.

Taken at Boudha Stupa in Kathmandu. To me, this is one of my best shots.

Plowing rice paddies in Pokhara, Nepal. Those are water buffalo.

As my friends and I were hiking up a steep hill overlooking Phewa Lake, we walked alongside terraced rice paddies in various stages of growth. Some, like this one, were just being prepared for re-planting, while others were ready for harvest, and others yet were still growing.

A Guide To Nepal's Culture - I wish I'd read this BEFORE I went to Nepal....

...but it was interesting to read through a friend's copy when I got back. I did a lot of nodding and learned more about what I'd experienced when I was there. 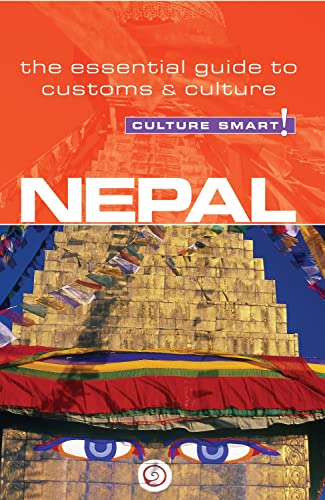 Nepal - Culture Smart!: The Essential Guide to Customs & Culture (16)
One reviewer writes: "I purchased this book before traveling to Nepal on a medical mission earlier this year. If you only have time to read one book about Nepal-this should be the one! Written by a woman who lived in Nepal for two years,Ms.Feller captures everything you need to know to prepare you for the culture of this fascinating country. Had I not read the book, I would have been unaware of the significance of unusual details i.e. extra long fingernail,body language-sideways rocking of the head,etc. The book is small and easy to pack."
Buy Now