Efficient Admin (aka Michelle) has been hiking for eight years on the wonderful mountain trails of North Carolina and South Carolina. 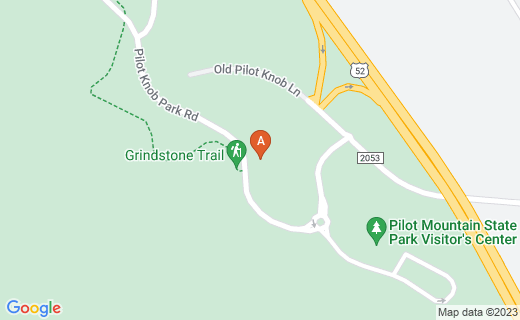 In 1976 this mountain was dedicated as a National Natural Landing, and this solitary peak is the centerpiece of Pilot Mountain State Park.

Write for Hubpages and earn money! Signup is free.

Approach any direction and you will see Pilot Mountain rising more than 1,400 feet above the countryside of the upper Piedmont plateau. In 1976 this mountain was dedicated as a National Natural Landing, and this solitary peak is the centerpiece of Pilot Mountain State Park. Scroll down through this hub to the very end to see many more photos of this lovely place.

Pilot Mountain is part of the leftover ancient Sauratown Mountains and is capped by two prominent pinnacles. Big Pinnacle, which has walls of bare rock and a rounded top covered by vegetation, rises 1,400 feet above the valley floor, with its knob jutting skyward more than 200 feet from its base (see photo above of the rounded rock dome, aka the knob). Big Pinnacle is connected to Little Pinnacle by a narrow saddle. Visitors have easy access to the top of Little Pinnacle where you can see hundreds of square miles of the Piedmont and the nearby mountains of North Carolina and Virginia.

Pilot Mountain served as a landmark on the Warrior’s path, a north-south trail running parallel to the Appalachian mountains, which was used by the native Saura and Tutelo Indians who populated the area. This later became known as the great Wagon Road used by European immigrants from the northern colonies who arrived after most of the native population had been decimated by disease introduced by Spanish explorers and warfare with other tribes like the Cherokee who dwelled in lands to the west. Pilot Mountain has been referred to by several names, including Stonehead Mountain and Mount Ararat, after the biblical Mount Ararat. The first written reference to the name “Pilot” was by Moravian missionaries traveling the great Wagon Road, who called it “the Pilot Mountain”.

The mountain was mapped in 1751 by Joshua Fry and Peter Jefferson, father of President Thomas Jefferson. Pilot Mountain became North Carolina’s 14th state park in 1968, due in large part to the efforts of a group of local citizens. Prior to that time, the mountain was a commercial tourist attraction. The Pilot Mountain Preservation and Park Committee pushed to make Pilot Mountain a state park in order to protect it and the surrounding area from further commercial development. The group secured options on the land and raised matching funds that made it possible to purchase the land with federal grants. This committee also acquired more than 1,000 acres of land along the Yadkin River that was added to the park in 1970. Additional acreage was later acquired, bringing the park to its present size of 3,651 acres.

Views from the Summit Parking Lot and the Little Pinnacle Overlook

What would be the most interesting thing to you if you visit Pilot Mountain?

Andy Griffith and an interview with a Park Ranger

The vegetation in the park is similar to that found in mountain habitats such as those in the Blue Ridge Mountains. More than 112 families and 570 species of vascular plants grow on and around Pilot Mountain. In late spring, the Big Pinnacle is ringed with bright pink blooms of Catawba Rhododendron. Also abundant is mountain laurel, distinguished by its leathery evergreen leaves and showy clusters of white flowers. Typical trees include the chestnut oak, table mountain pine and pitch pine. Wild blueberry, huckleberry and grape can be spotted along the trails. The park protects plant species that are rare in N.C., such as bear oak and Greenland sandwort.

Listen carefully and you will hear the sounds of American toads, chorus frogs and spring peepers. Many songbirds live here including the eastern bluebird, Carolina wren, brown thrasher and various warblers. Watch for ravens soaring above Big Pinnacle. The raven is a rare bird at Pilot Mountain. Other wildlife in the park include the red and gray fox, white-tailed deer, coyote, black bear, woodchuck, opossum, grey squirrel, raccoon and several species of reptiles and amphibians. The park protects several species of amphibians that are rare in the northwest piedmont.

Sights along the Ledge Spring Trail

You can see the trails of Pilot Mountain on foot or by horseback, and there are many miles of trails to explore. Little Pinnacle Overlook offers hikers a close-up view of Big Pinnacle and distant views of the valley below. Equestrians and hikers alike will relish the trails through the five-mile woodland corridor that connects the two sections of the park. Cliffs and crevices, ravens and rhododendron are only a small part of the scenery to be discovered. Here is a very quick overview of the trails at Pilot Mountain:

Scenes along the Jomeokee Trail

Scenes along the new Grindstone Trail

View from the top and other sights

In the fall, thirteen species of raptors can be seen at Pilot Mountain. Most raptors pass through after a cold front has gone through the area and their numbers peak in September. The most numerous raptor is the Broad-winged Hawk. The best viewing location is Little Pinnacle Overlook. The summit parking lot also provides good viewing. Bring your binoculars!

Many raptors migrate south in the fall. Most eastern North American raptors follow the Appalachian Mountains southwesterly to where prey is more abundant. Along the mountains, northerly winds form updrafts and heated air pockets called thermals help the birds gain lift and save energy while flying.

Other sights at the base of "the knob", which is known as Pilot Mountain

On the River - Canoeing

You can enjoy the Yadkin River by canoeing through the park on a section called the Yadkin River Canoe Trail. This 165-mile trail follows the river passing through five reservoirs to the Yadkin and Uwharrie rivers. The two-mile portion of the Yadkin River that flows through the Pilot Mountain State Park is one of the most scenic stretches along the river’s course. Enormous river birches overhang on the banks over the water and also sycamores dot the riverbanks. Here, the river is broad and shallow with many ripples. Two small islands, 45 and 15 acres in size, lie in the river. The islands may be reached by wading on foot, by horseback or by canoe (my hiking party did not get to the islands but I wish we could have crossed the river on foot to explore the island--we ran out of time).

The river flows past Bean Shoals Canal Wall, part of an ambitious project undertaken between 1820 and 1825 to build a three-mile canal around Bean Shoals. The project was abandoned before completion. View these historic walls along Canal Trail (Rock Hill, SC also has a Canal Trail from the same era and you can read about it here).

There are 38 canoe access sites along the trail. Shoals Access Site is a half mile upstream from the Yadkin Islands. Parts of the river are also suitable for rafting at times but you should contact the park office for more information.

Family Camping: the lower slopes of Pilot Mountain contain the family camping area where 49 campsites for tents and trailers are scattered among oaks and hickory trees. Each site has a tent pad, table and grill. Drinking water is available throughout the campground and two modern washhouses with hot showers are available (this is really nice to have after hiking a few miles every day). Hookups are not provided and you must bring your own firewood. Gathering wood at the park is prohibited. Sites are open March 15 through November 30 and are available by reservation.

Canoe Camping: Two primitive canoe-in sites are available on the South side of the river about ¾ of a mile downstream from the Shoals Road Canoe Access. A Pit toilet is available but you must bring your own water and pack out your refuse. Advance Reservations are required for these sites and can be made through the central reservation system. No camping is allowed anywhere on the Yadkin River Islands or other undesignated areas.

Youth Tent Camping: On the north side of the Yadkin River is a camping area for youth groups and includes tables, a fire circle, drinking water and pit toilets. Here, organized youth groups can enjoy fellowship in a wilderness setting. Reservations are required and campers should be alert to high water conditions which may cause flooding in the area.

Rock Climbing and rappelling are favorite activities at Pilot Mountain where rocky cliffs offer a challenge to experienced climbers. Climbing is permitted only in designated areas and not on the Big Pinnacle. The Big Pinnacle is a sanctuary for nesting Ravens and Raptors and has been closed to all forms of climbing since the 1970s. All climbers must register before beginning a climb. Contact the park office for further information on climbing.

For Your Safety Remember These Tips!